You Are Here: Home → 2011 → March → 27 → KMU Resolves to Intensify Struggle Against Globalization and For A Just and Lasting Peace

During the 10th National Congress of the Kilusang Mayo Uno, the labor center took stock of its strengths and weaknesses and resolved to bring the struggle of workers to a higher level, and to pursue the fight against neoliberal policies, which constitute an attack on the rights of workers and the Filipino people.

BAGUIO CITY – The Kilusang Mayo Uno (KMU or May 1st Movement) held its 10th National Congress from March 15 to 18 at the Teachers’ Camp in Baguio City. Participated in by more than 300 delegates from unions all over the country, the congress opened with a keynote address by Prof. Jose Maria Sison titled The Current Imperialist Crisis and the peoples’ struggles: Tasks of Filipino workers in concert with the workers of the world. In his keynote address, Prof. Sison criticized the neoliberal policy of globalization for attacking the democratic rights of workers, pressing down wages, eroding hard won social benefits and cutting back government spending for social services. At the same time, Prof. Sison said, globalization has opened opportunities for generating more profits for multinational companies through tax cuts, trade and investment liberalization, privatization of public resources, deregulation, and removing all barriers to foreign investments and trade.

“The neoliberal policy of globalization has resulted in the gravest economic and financial crisis since the Great Depression. Public money has been used to bail out the very malefactors that have caused the crisis, such as the financial oligarchy and the corporations in the military industrial complex in the US and elsewhere. There is no economic recovery in terms of expanding production and employment. The recovery is in the books of the banks, in certain major corporations and in the financial markets.

The International Labor Organization reports, even if with understated figures, that real wages have plunged, while global unemployment has stood at an all-time high, with little hope of returning to pre-crisis levels in the near future. In contrast, American and European corporations appear to have bounced back and are logging record-high profits this soon since the crisis. For instance, in the third quarter of 2010, American business collectively reported a record-high of $1.66 trillion in profits.” 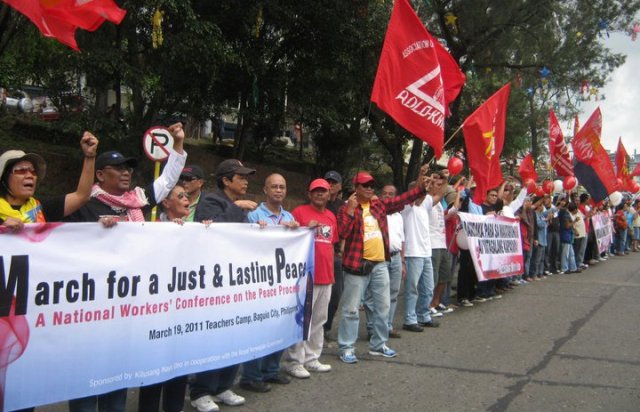 Sison thus urged the KMU to “do everything possible to arouse, organize and mobilize the people in order to assert their national sovereignty, expand democracy, promote economic development through land reform and national industrialization, raise employment and improve the people’s livelihood, make science and technology serve development and the people, realize social justice and achieve a just and lasting peace.”

After the keynote address, which was delivered through a video conference, Satur Ocampo, former Bayan Muna representative and senatorial candidate and currently its national president, discussed his views on the national situation.

The second and third days were devoted to a review of the accomplishments and shortcomings during the last four years, discussion and approval of amendments to the Constitution and By-Laws and the finalization of its program of action for 2011-2014.

The KMU recognized the important role that the trade union center played not only in leading union struggles in factories and workplaces but also in the fight for just wages and a P125 across the board increase, the protests against the overpricing of oil products, the struggle against demolition of urban poor communities, and the protests against the spikes in prices of basic goods, services and utilities that have caused hardships among workers and the Filipino people. It reaffirmed its task in the struggle against attacks on workers and people’s rights such as labor contractualization, assumption of jurisdiction orders, as well as political repression and killings. It also supported the struggle of farmworkers of Hacienda Luisita for land and justice and the Filipino people’s campaign to oust former president Gloria Macapagal-Arroyo.

At the same time, the KMU recognized its weaknesses and shortcomings in effectively confronting the problem of labor contractualization, in reaching out to more workers in strategic enterprises and industrial enclaves, and in mobilizing its members en masse in anti-imperialist campaigns.

Thus, for its program for the next four years, the KMU resolved to expand its ranks and reach out to more workers in factories, strategic enterprises, industrial enclaves, and communities, fight for substantial wage increases, oppose anti-workers laws, policies, and agenda of the Aquino administration, pursue the rights of workers in factories and workplaces and the issues, interests and welfare of the Filipino people, and strengthen its education, cultural, and propaganda work, among others.

To confront the worsening economic crisis in the world and in the country, the KMU resolved to take a leading role in the struggle against neoliberal policies and globalization, and imperialist wars of aggression. It would strive to form an international workers’ alliance against imperialism.