You Are Here: Home → 2011 → April → 11 → Aquino Government Callous to People’s Difficulties Amid Spikes in Prices

Aquino Government Callous to People’s Difficulties Amid Spikes in Prices

“Can the President not see how difficult it is now for Filipino families to cope? It does not take a rocket scientist to understand that the current wage levels are just not enough to give Filipino families a decent and dignified life.” – Gabriela Women’s Party Rep. Luz Ilagan.

MANILA – Life is not getting any better. For minimum wage earner Maria Suleta Saldaña, 39, a factory worker for 19 years at the Bleustar Manufacturing and Marketing Corporation (BMMC), maker of boots and shoes with the brand name Advan, what she and her husband earn is barely enough for her them to survive. She cannot hope to build a house of her own or invest in a business in preparation for her retirement.

Saldaña is married but childless. Still, she complains that what she earns is barely enough to maintain an apartment that she and her two co-workers are renting. 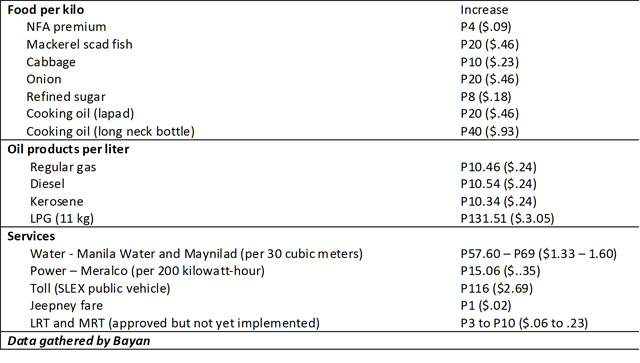 But recently, Malacañang refused yet again to legislate the long standing proposal for a P125 ($2.90) across the board daily wage increase for workers in the priVATe sector. Presidential Communications Development and Strategic Planning Secretary Ricky Carandang said the legislation of a wage increase across the board might cause “distortions” and “inflationary pressures.”

The wage increase being demanded by wage workers would only provide immediate relief to help them cope with the soaring prices of basic commodities, transportation fares and oil products. It is not even the full answer to the wage erosion caused by soaring prices, said progressive labor groups, adding that neither is it the full answer to the social injustice that features corporations raking in more than 500-percent increases in profits in the last decade, while workers’ wages have been deteriorating.

“Can the President not see how difficult it is now for Filipino families to cope? It does not take a rocket scientist to understand that the current wage levels are just not enough to give Filipino families a decent and dignified life,” said Gabriela Women’s Party Rep. Luz Ilagan.

But Carandang merely wanted to continue passing the decision-making on wage adjustments to the regional wage boards, which labor groups have long assailed as “inutile”. Progressive party-list groups such as the GWP who co-authored the House Bill 375 seeking to legislate a P125 across the board wage increase for priVATe sector workers and HB 3745 seeking to legislate a P6,000 ($48) increase in the minimum pay of government employees, said that Malacañang should not rely on the Regional Wage Boards anymore. “It has been our experience that wage boards implement only a measly sum which workers can barely feel.”

The Unabated Increase in Prices of Commodities, Utilities, etc.

How much had the prices in commodities, oil products and utilities increased since Benigno S. Aquino III became president? In a study of the umbrella group Bagong Alyansang Makabayan (Bayan), they found out that, “The increase in prices of basic commodities is not a joke, especially in a short period of time since the new government took power.”

According to their study, galunggong (mackerel scad), the most frequently bought fish because of its relatively cheaper price, has gone up by P20 ($.46) per kilo from June 2010 to March 2011.

The price of cooking gas or the 11 kg liquefied petroleum gas (LPG) tank has increased by P131 ($3.05. Petroleum products on the other hand increased by more than P10 ($.23) per liter. Bayan said poor families who use gas or kerosene for cooking or light are doubtless more terribly affected by the increases since it would mean that more than P42 ($.97) per month have been added to their expenses.

Charges in utilities like water and electricity have also increased in nine months since Aquino became president. Bayan said every household that uses 30 cubic meters per month has had to pay an additional of P69 ($1.60) in their monthly bill. For power charges, an increase of P15 ($.35) per month has been added to a household that consumes 200 kilowatt per hour.

The biggest additional burden to the people, said Bayan, are the excessive and continuous price increases. They said that as president, Aquino has the power to set a price ceiling under Section 7 of Republic Act No. 7581 or the Price Act.

Under the Price Act, the State has to “ensure the availability of basic necessities and price commodities at reasonable prices at all times without denying legitimate business a return on investment.” Under the conditions stated in the Price Act, price ceiling should apply in cases such as widespread manipulation of prices (overpricing); the impendency, existence, or effect of any event that causes artificial and unreasonable increase in the price of the basic necessity or prime commodity (Bayan cited as example the civil war in Libya and price speculation of oil and food); and whenever the prevailing price of any basic necessity or prime commodity has risen to unreasonable levels.

Prices of basic commodities such as rice, sugar, fish, meat, bread, canned-goods, and noodles, among others, are included in the Price Act. It includes as well prices of fertilizer, pesticides and medicines.

Recently, prices of pork and chicken have increased by P5 ($.11) per kilo. The Manila Electric Co. (Meralco) also announced an increase in generating fee by 20 centavos per kilowatt-hour this month. In May, the LPG Makers Association (LPGMA) said there will also be an increase in the price per kilo of LPG since the “situation in the Middle East is still abnormal.”