Human rights group Karapatan said that with the CHR resolution, “the crime of torture will have its heyday under the Aquino administration.”

The Commission on Human Rights’s (CHR) report on the abduction of Filipino-American activist Melissa Roxas and two others has drawn criticisms from human rights groups.

Roxas, a member of Bagong Alyansang Makabayan-USA chapter, and her two companions Juanito Carrabeo and John Edward Jandoc were forcibly taken by armed men on May 19, 2009 in La Paz, Tarlac. Roxas suffered torture for six days before she was freed by her captors. In her affidavit and subsequent testimonies before the CHR and Congress, Roxas maintained that her captors were members of the military.

In its recent findings, however, the CHR said there is insufficient evidence to support Roxas’s allegations that members of the Armed Forces of the Philippines (AFP) took her and subjected her to physical and mental maltreatment. 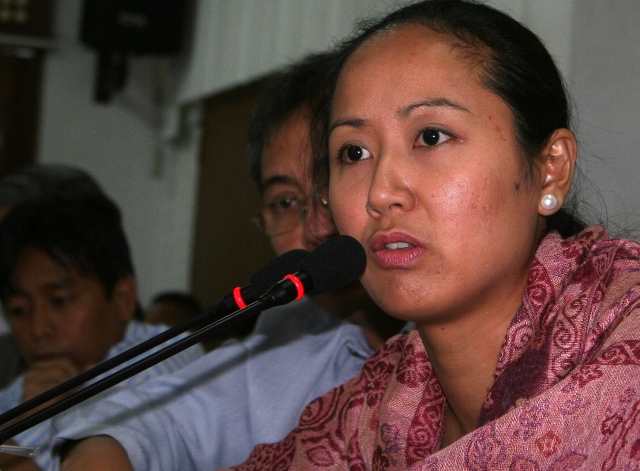 Melissa Roxas testifies during the Commission on Human Rights (CHR) investigation on her abduction and torture in 2009.(Photo by Ronalyn V. Olea / bulatlat.com)

“In the light of the lack of evidence against the persons who inflicted the physical and psychological maltreatment on the complainant, it is not possible for the Commission to reach any findings on torture, the definition of which includes elements of State party or agent and certain intentions, purposes and motivations,” the CHR resolution said.

The same report states: “The CHR has received information that indicates the possibility that members of the NPA committed the kidnapping and other human rights violations on Roxas et al. These sources have been found to be credible. However, no specific names of individuals have been provided to the CHR, thus the Commission, with its limited resources, is unable to further follow up and identify specific persons as the possible perpetrators.”

The report also said that “given the findings that present strong indication of involvement of the members of the New People’s Army as the perpetrators of the human rights violations against the complainant, there is a need to remind the parties of …the Comprehensive Agreement on Respect for Human Rights and International Humanitarian Law.”

In a statement sent through email, the Communist Party of the Philippines (CPP) dismissed claims by the CHR and the military that the NPA is responsible for their illegal arrest and torture of Roxas et.al.

Renato Reyes Jr., Bayan national secretary general, noted that the report “seems to be a departure from the investigation initiated by the former CHR chair Leila de Lima. “The resolution says that there is insufficient evidence to lay responsibility for Melissa’s abduction and torture on the AFP. This is despite Melissa’s credible and detailed testimony,” Reyes said.

“During detention, according to her testimony, Melissa was forced to sign a document saying she’s a member of the NPA and was repeatedly asked to return to the fold of the law. She was asked how she got involved in Bayan USA and was lectured on anti-communism and religion. She was told she was in the ‘order of battle.’ She was only released when she played along with her captors’ demand that she “reforms.” Is this the work of the NPA? It simply defies logic. What is the motive of the NPA for abducting her? Why does the CHR give this theory any credibility?” Reyes asked.

Bayan decried as “gratuitous, illogical and unsubstantiated” the CHR’s statement that sources pointing the NPA’s involvement were “credible.” The group questioned the basis of how the CHR came to the conclusion that the “findings present strong indication of the involvement of the NPA.”

Bayan also dismissed as discredited the AFP line that human rights violations against leftists were the handiwork of the NPA, citing the findings of the Melo Commission and United Nations Special Rapporteur on extrajudicial killings Philip Alston.

In a separate statement, Cristina Palabay, convenor of Tanggol Bayi, an alliance of women human rights defenders, said that the the resolution “ gives credence to and parrots the military’s illogical propaganda that the NPA was responsible for her abduction and torture.”

“It is a surprise then that the CHR again resurrects this worn out and discredited line. It’s an injustice to Roxas and other victims of torture who are unable to identify their torturers hidden in the shadows,” Reyes said.

Meanwhile, the CPP said “the CHR completely ignored the glaring fact that Roxas and her companions were subjected to the type of torture routine that was being perpetrated by the forces of the 7th ID against people it accused of being members or supporters of the NPA.”

The CPP said the CHR “has done a big favor to Gen. Jovito Palparan who commanded the 7th ID [Infantry Division of the Philippine Army] from 2005 to 2008 and led it on a rampage of human rights abuses in the provinces of Nueva Ecija, Bulacan, Pampanga, Bataan and Zambales.” “Ms. Roxas was arrested and subjected to torture by the very people who carried out the arrest and torture of scores of other victims,” the CPP said.

The CPP cited “other victims of the 7th ID” such as brothers Raymond and Reynaldo Manalo, University of the Philippines students Karen Empeño and Sherlynn Cadapan, peasant organizer Jonas Burgos and union leader Rogelio Concepcion. Only the Manalo brothers were able to escape and the rest remain missing to this day.

In a text message to Bulatlat.com, Edre Olalia, secretary general of National Union of Peoples’ Lawyers (NUPL), said: “NUPL joins Melissa Roxas and other human rights victims and their families in utter disbelief regarding CHR findings. It is simply incredible and unacceptable given the facts, pattern, motive, means, opportunity and context of her ordeal. It ignores the overwhelming findings regarding the role of state security forces in the Oplan Bantay Laya of then President Gloria Macapagal-Arroyo.”

Tanggol Bayi’s Palabay also said: “Roxas’s detailed testimony on the line and manner of her interrogation, as well as her account of the various psychological and physical torture done to her, shows the same patterns of abduction, interrogation and torture inflicted by state military forces on the hundreds of victims of such violations. Thus, CHR resolution not only defies logic, it is absurd and malicious as it is no different to the hogwash of lies already churned out by the military, Gen. Jovito Palparan and Pastor Alcover of ANAD [Alliance for Nationalism and Democracy],” Palabay said.