The solidarity mission went to Pantabangan to document the conditions of the Igorot community who are being displaced from the land they have been tilling. The team did not expect that they would experience what the Igorots have to put up with in their struggle for land.

Sidebar: For two Igorot women, a constant struggle to survive

Sidebar: Imprisoned for refusing to leave their land

PANTABANGAN, Nueva Ecija — Early morning of May 2, I rode a bus to Cabanatuan City to join a solidarity mission organized by Alyansa ng Magbubukid sa Gitnang Luson (AMGL). The mission aims to conduct an investigation on the conditions of an Igorot community being displaced by projects under a public-private partnership project.

On board two jeepneys from Cabanatuan City, the team, composed of some 30 individuals from peasants, indigenous peoples, human rights groups and church-based organizations, went straight to Pantabangan Municipal Hall in Nueva Ecija for a courtesy call with the local mayor. After waiting for more than an hour for a certification from the mayor, we travelled for more than an hour and reached Lower Tuli subvillage, Villarica village shortly before dark. Two local radio journalists, both women, joined us.

We saw a group of local folk standing outside their nipa huts. When we stepped out of the vehicles, we saw a dozen men, wearing shirts and shorts, hammering pieces of wood. One was wearing a black sleeveless shirt printed with the word “Army.”

Hanging in one of the huts was a banner with the words: “Welcome, Bayanihan Program. Mamulat, Makiisa at Makialam para sa Mapayapa at Maunlad na Lipunan.” On another hut was a banner of the Spartans of the 81st Infantry Battalion of the 7th Infantry Division of the Philippine Army based in Sto. Nino 2, San Jose City, Nueva Ecija.

Joseph Canlas, AMGL chairman and Sr. Cecille Ruiz, chairwoman of Karapatan-Central Luzon and Antonio Flores of Kilusang Magbubukid ng Pilipinas (KMP) approached the men who introduced themselves as soldiers of the 81st IBPA. Canlas asked for the commanding officer. 2nd Lt. Titus Eleven Canedo presented himself, saying he is in charge of the project. When asked, Canedo said they have been staying in the area for five days and that they are building a multipurpose hall. He instructed another soldier to take photos of the “visitors.”

At that moment, I was holding a camera, taking photos. Canedo looked at me and asked for my identification. He held my press card and read my name aloud. He asked what Bulatlat is and I answered. Canlas said I am not the only journalist in the group and that we were invited to cover the solidarity mission.

Not long, a man wearing a cap and a shirt with the words “I Heart Peace” joined us. He introduced himself as Capt. Elmar Salvador, commanding officer of the Spartans team. Immediately, he patted the back of one of the male members of the delegation and told him: “I heard what you said to Tatang (old man) earlier. Your words were striking.” Later on, I would learn that the delegate told the old man that there is no change under the new administration.

Canlas, speaking to Ruiz, said that during our arrival, Salvador merged himself with the local residents. Defensive, Salvador said he was only talking with the people. Then he suddenly touched his shirt and said,“This is our shirt.”

Canlas went on explaining that the mission wanted to interview the residents regarding their land problem. “Go on. I will not meddle with you,” Salvador said.

Salvador said they are there for the Bayanihan program initiated by the chief executive. “We want to experience how to live as normal Filipino citizens, that we also belong to society,” he said. He went on saying that they are there to organize the community. The conversation lasted for a while until the leaders of the solidarity team ended it. 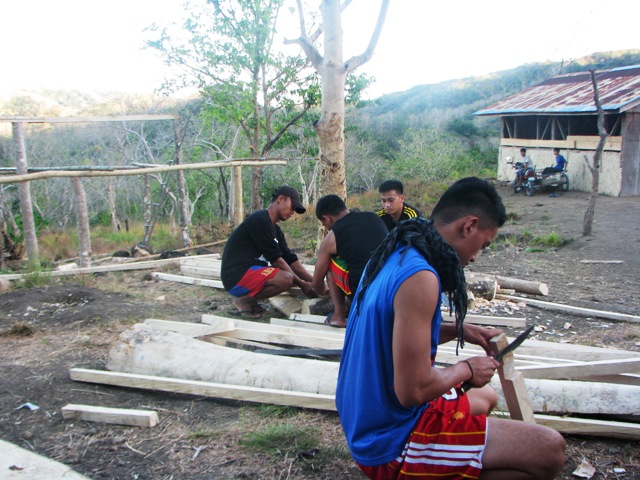 Soldiers of the 81st Infantry Battalion of the Philippine Army build multipurpose hall in a far-flung village in Pantabangan, Nueva Ecija.(Photo by Ronalyn V. Olea / bulatlat.com)

The solidarity mission team decided to stay for the night. The road back to the town proper is dangerous. We occupied the small wooden church of the United Church of Christ in the Philippines (UCCP), a few meters away from where the soldiers were staying.

There is no electricity. We lit a bonfire and had dinner, rice and mongo with sardines and squash. The laughter of children playing failed to ease the tension in the air. It took time before residents came near the church to talk to the members of the solidarity team. We knew that some of the soldiers in civilian clothes were listening to the discussions about the problems of the community.

It was one of the longest nights I had. Exhaustion from the trip and the coverage of May 1 rally the previous day could not make me sleep. Horror stories of soldiers strafing civilians’ huts flashed through my head, like the case of my dear friend Benjaline Hernandez. I thought about Leonard Co and his two companions who were killed during a so-called military encounter. In my mind, I saw my daughter’s sweetest smile and prayed I would see her still.

Beside me was Megan, a staff of the AMGL. She shared her fears, too, telling me we could be victims of a massacre. We laughed at each other but it did not change our thoughts.

DJ, a member of Karapatan’s documentation team, said she alerted the national office about our situation. DJ said Tita Marie [Hilao-Enriquez] would stand by for any update.

I took short naps. Every time I opened my eyes, I looked at the wide window and the open door. It was as though I was preparing myself for the worst. When dawn came, I felt some relief. I stood up at 5 a.m., thankful I am still alive.

Megan confessed she barely slept, too and that she heard men mimicking sounds of wild pigs and birds. I learned that Canlas and a local leader stayed awake, guarding us.

We had breakfast by 6 a.m. Soldiers resumed “working” on the multi-purpose hall by 7 a.m. For five days, they managed to put up posts a little thicker than a ruler.

Some of the residents went inside the church to continue consulting the peasant leaders about their conditions. At the same time, we were told that Salvador also gathered a number of residents somewhere near for a discussion. 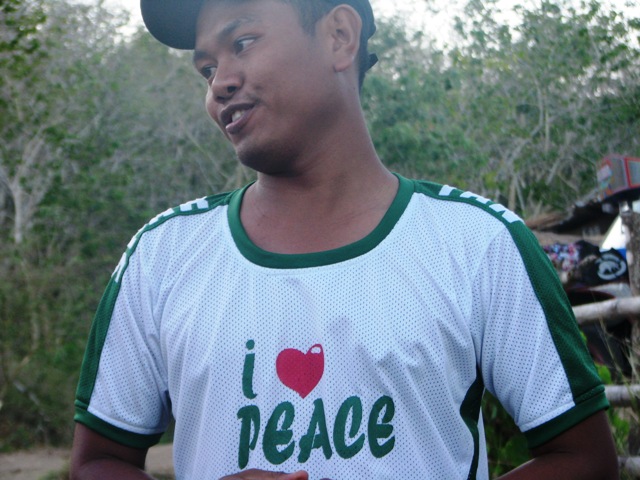 Later that morning, Clarizza, a local radio reporter, told me that Salvador asked them about what happened last night. She told the military officer that she was asleep, which was true. Salvador then said he would buy two transistor radios to monitor Clarizza’s report and that of another reporter Camia. Salvador told Clarizza: “If you say anything bad, I would list it down on my log book.”

The military officer also told Camia that he remembered her covering another land dispute issue in another town in Nueva Ecija.

We left before noontime. We got out of Pantabangan after pushing the two jeepneys twice.

I asked myself if I was just being paranoid. My fears were not without basis. After years of exposure to cases of human rights violations as a journalist, I have lost my trust on state security forces.

I find their community work insincere. In the first place, civilian government agencies should be the ones providing basic services to poor communities. It is ironic that the Igorot community in Lower Tuli does not have access to electricity when the Pantabangan dam is just right there. Roads are not passable. Would a multi-purpose hall matter if they do not even have a school or a clinic nearby.

Why are the soldiers staying at the heart of the community? The soldiers said New People’s Army (NPA) guerrillas frequent the place. What would they do to civilians when NPA fighters pass by?

Under Article 13 of the Protocol Additional to the Geneva Conventions of 12 August 1949, and Relating to the Protection of Victims of Non-International Armed Conflicts (Protocol II) , the civilian population and individual civilians shall enjoy general protection against the dangers arising from military operations.

In this particular instance, are not the soldiers putting the lives of civilians at risk?

After staying for a day in the community and documenting their problems and the developments in the land issue, the mission team decided to leave the area to visit Ernesto Bubod at the San Jose City District Jail.

We left the community worrying about what the soldiers would do or say to civilians who talked to us. The history of military atrocities in Pantabangan is horrifying.

I was reminded of Pastor Andy Pawican, a UCCP pastor who was allegedly taken by four soldiers of the 48th IBPA on May 21, 2006 in Fatima village in Pantabangan. He was found dead the next day. Two more farmers who carried Pawican’s body also went missing.

I also remembered the Gallardo couple who committed suicide in October 2006 after the soldiers tortured and threatened them for two days.

More recently, Salvador’s colleagues were the ones who arrested Igorot leader Ernesto Bubod who has been falsely charged with illegal possession of firearms. Bubod’s wife Lita told us she saw one of the five men who took her husband right there in the community.

During our visit to Pantabangan, residents did not articulate the terror that we felt. How could they in the presence of soldiers? As one of the leaders put it: “Civilians are helpless in this situation. The soldiers are staying here, they could not do anything.”

Before we left, we were informed that the 81st IB would send two more Army trucks of soldiers. If their intentions are good, why did they seem threatened with our presence?