When then United Nations Special Rapporteur on extrajudicial, summary or arbitrary executions Philip Alston pointed to the filing of charges against political activists by the Interagency Legal Assistance Group (IALAG) as violative of human rights, the previous Arroyo administration dismantled it. But even without the IALAG, the filing of harassment charges against political activists continues, even under the current Aquino government.

MANILA – Doris Cuario, 45, is not only battling leukemia but also continued political persecution.

For the third time, charges were filed against 72 activists in Southern Tagalog, collectively known as the Southern Tagalog 72 (ST 72). On May 18, the regional prosecutor in San Pablo City, Laguna issued a subpoena summoning all accused to respond to the charges.

Pale as paper, Cuario, almost in tears, spoke in front of other activists from Southern Tagalog: “This is what we get for serving the people.”

Since the first case was filed against ST 72, Cuario, like most of her colleagues, has been low key even as she continued her involvement in organizing work in various provinces. While under constant threat of being arrested, Cuario has to tend to not only her organizing work but also her medical needs. She has been taking maintenance drugs and needs to undergo laboratory tests every now and then.

Unlike her body, her spirit remains strong. “They [state agents] might have thought that I’m already dead but I am still here. Until the end, I want to give my all to the mass movement.” 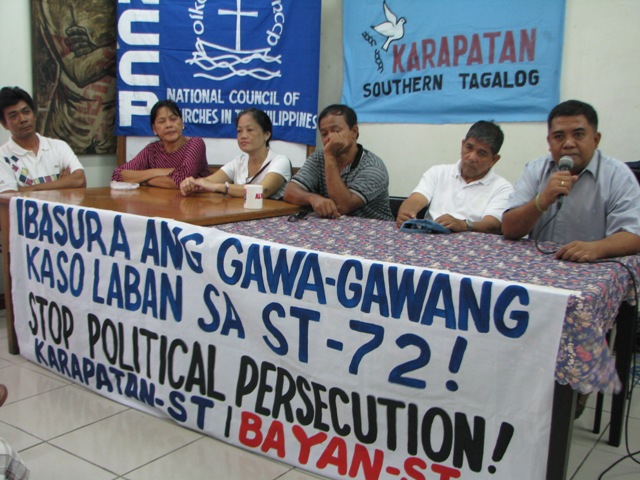 Despite the risks, Cuario readily took on the human rights work in the region since 2004. She replaced Irein Cuasay who had been slapped with trumped-up charges. Before Cuasay, Karapatan-ST secretary general Eden Marcellana, was brutally killed, along with peasant leader Eddie Gumanoy, by soldiers.

Cuario has faced many forms of harassment.

On April 20, 2004, Cuario recalled that heavily armed men surrounded the Iglesia Filipina Independiente Church in Roxas, Oriental Mindoro where they were staying. “Palparan’s bonnet gang surrounded us, from dawn until late afternoon. A few days after, fellow human rights worker Isaias Manano Jr. was gunned down,” Cuario related. Gen. Jovito Palparan Jr. , former commander of the 204th Infantry Brigade of the Philippine Army, earned the moniker “Butcher of Mindoro” for the series of extrajudicial killings in the island when he was assigned there.

Cuario also got copies of leaflets distributed by the military. “There was a caricature, with my name on it. I was shown giving relief goods to NPA [New People’s Army] guerrillas,” she said. The AFP has branded Karapatan and other progressive groups as front organizations of the Communist Party of the Philippines (CPP) and NPA.

In one of the fact-finding missions in Catanauan, Quezon in 2006, Cuario said their team, with some Canadian delegates, was able to hurdle seven military checkpoints.

Another human rights worker, United Church of Christ of the Philippines (UCCP) Pastor Edwin Egar, is among the accused.

Egar, 46, is a member of the human rights program of the National Council of Churches of the Philippines (NCCP), a fellowship of mainline Protestant and non-Roman Catholic churches in the Philippines.

“I was bothered by the revival of charges,” Egar told Bulatlat in an interview. “Just when I thought I could already move freely, that everything is back to normal, here comes another case.”

Like Cuario, Egar was also subjected to surveillance and other forms of harassment.

On February 9, 2009, while Egar was at a relative’s house in Rosario, Batangas, armed men on board a Misubishi van and a black car parked outside the house. Three of the men went to Egar and pointed their pistol at him. The men identified themselves as policemen from Canlubang, Laguna and showed Egar a photocopy of a warrant of arrest. 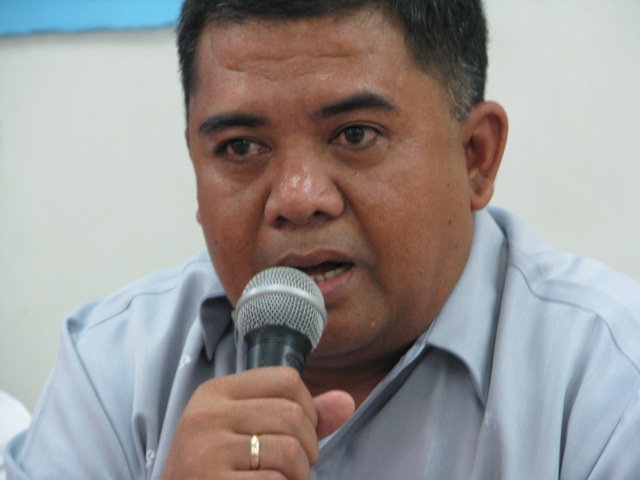 “I thought then that they would either kill me or imprison me,” Egar recalled. He was handcuffed and brought to Camp Vicente Lim. A few hours after, he was released. He later learned that his colleagues at the United Church of Christ in the Philippines (UCCP) called the attention of the higher-ups and demanded his immediate release.

According to the United Nations Declaration on Human Rights Defenders , human rights defenders like Cuario and Egar have the right, among others, “to effective protection under national law in reacting against or opposing, through peaceful means, acts or omissions attributable to the State that result in violations of human rights.”

Apparently, Cuario and Egar are being charged in court to prevent them from performing their role as human rights defenders.

“This [administration] is even worse [than the Arroyo regime] because it hides behind an angelic face but is actually committing grave human rights violations,” Egar said.

Egar noted that even without the Inter-Agency Legal Action Group (IALAG) of then president Gloria Arroyo, fabricated charges against activists continue. The IALAG was formed to build up charges against perceived enemies of the government.

When he learned about the revival of charges against the ST 72, Fr. Rex Reyes, NCCP general secretary, said: “Truth has come out that this government is no different from Arroyo.”

“How can they live a normal life when they are constantly harassed? Why did they include even the dead? What kind of intelligence is that?” Reyes said. One of the ST 72, Rogelio Galit, died in June last year. He is still in the charge list.

“No amount of window-dressing can hide the repression under Oplan Bayanihan,” Reyes said, referring to Aquino’s counterinsurgency program.

Also included in the charge sheet is Manny Asuncion, a leader of Bayan Muna-Cavite chapter. “Slowly, this administration that portrays itself as pro-people, is being unmasked. It wants to paralyze the people’s movement,” Asuncion said.

Amy Santo Tomas, a leader of Gabriela in Cavite and also one of the ST 72, said: “They want to silence us because they do not want their wrong doings to be exposed.”

Reyes could not help but admire the commitment of the S T 72. “Nobody can defeat them. Their desire to work for genuine change is there.”

Reyes vowed to call the attention of international groups and human rights bodies regarding the political persecution of the ST 72.

The Uniting Church of Australia has already sent a letter to Malacanang demanding the dismissal of charges against Egar and the rest of the ST 72.