“We are workers, we are not slaves. It is time for labor power to lead and guide the world for it gives and sustains life, unlike finance capital which is a grave-digger of both human life and nature.”

MANILA — In the 21st century, with technology so advanced, a migrants’ rights advocacy group said, it is an anachronism that there are more slaves now than ever in the history of mankind.

“It is shameful but true that there are more human slaves today than in any time in history,” Dr. Irene Fernandez of Tenaganita, an organization based in Malaysia that advocates for the rights of women migrants and refugees, said “And you call that development?”

Citing data from the Asia Pacific Migrants Mission (APMM) study in 2010, Fernandez said, there are 214 million people who are “on the move” worldwide. Their respective governments have earned millions through their remittances and, thus, the labor export policy has become the next biggest illegal syndicate next to drugs, said Fernandez.

Many countries, she added, dreams that they could implement development, as the World Trade Organization puts it, through remittances. “But this is not true. This is a mere trade in human beings,” Fernandez said, “They are not even termed as human resources nowadays. They are called human capital because the human being, the human with a soul is no longer being seen.” 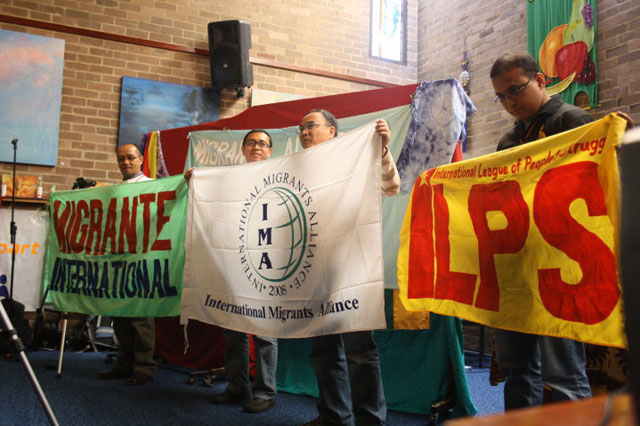 The APMM study showed that labor migration dramatically intensified when the global economic crisis broke out late in 2007. The “real deal” of labor migration, APMM said in their study, is not just the oppression that migrants are facing in their receiving countries but the social injustices that they have left home. “The push to work abroad is at the heart of the problem,” the study read, “Most if not all sending countries are in chronic economic crisis, pre-industrial and agrarian.”

The APMM, in their Global Migration Facts and Figures 2010 report, said that remittance inflows to countries in the Southeast Asia have increased from 2000 to 2009. From virtually nothing in 2000, Vietnam, in 2009, received a total of $8 billion in remittances. Indonesia, on the other hand, received an estimated $2 billion in 2000, which increased by $5 billion in 2009.

The Philippines, which ranked fourth in the top remittance-receiving countries in 2010 and first among south east asian countries, earned some $6 billion in 2000 and almost $20 billion in 2009. In the 2010 data, the Philippines earned $21.3 billion from its human exports.

Data on the top ten migrants receiving countries in Western and Central Europe show no dramatic increase from year 2000 to 2010. Yet, the total share of the migrant population for countries such as Sweden, Spain, Latvia, Austria, Croatia, Cyprus, Ireland, Switzerland, Liechtenstein and Luxembourg have steadily increased from 2000 to 2010.

The Middle East, which is considered mainly as a region of migrant-receiving countries, the APMM said, had a migrant population of 26.6 million or 13.5 percent of the world’s total in 2010. This has increased by 4.5 million compared to its 2005 figure.

In his welcome remarks during the second assembly of the International Migrants Alliance, Migrante International chairperson Garry Martinez said that labor migration is a result of the “increasing under-development of nations that have long ago opened their economies to neo-liberal policies under the banner of globalization.”

Martinez said, Migrante International has recorded “countless cases of inequality and human rights abuses that Filipino migrant workers have been subjected to.” He added that, “millions of families are being torn apart, children separated from their families and lacking nurture and guidance.”

“Despite the warnings of those who have gone before them regarding the dangers of contract substitution, abusive employers, inhumane treatment and conditions of work, sexual abuse, neglect and indifference of embassy officials and other multitudinous problems that confront overseas workers, many still risk facing these challenges and crossing their fingers in the hope that they would be the exception rather than the rule in these difficult circumstances,” Gabriela Rep. Luzviminda Ilagan said. Gabriela Women’s Party.

Citing their own experience, Wahu Kaara of Kenya Debt Relief Network said that Africa is “made up of imperialism and resistance.”

“We made the civilization and we will destroy it because we know how to make it,” Kaara said. She added that imperialism has taught the people that it is natural to have unequal relations, politically, economically and socially.

“If we do not wake up and do something, we will become migrants everywhere,” Kaara said.

During the IMA assembly, migrants and migrant rights advocates gathered together to discuss urgent issues emanating from the global economic crisis and to come up common strategies in confronting such.

Eni Lestari, chairperson of IMA, said that the large-scale migration is a consequence of miserable conditions in countries of origin characterized by massive unemployment, landlessness, poverty and underdevelopment. “The current global economic crisis is intensifying forced migration and exacerbating labor export policies being implemented by governments,” she said.

Kaara said that the worsening condition of migrant workers is “tantamount to modern-day slavery.” She added that “We are workers, we are not slaves. It is time for labor power to lead and guide the world for it gives and sustains life, unlike finance capital which is a grave-digger of both human life and nature.”