At last year’s Cinemalaya Film Festival, the First Quarter Storm drama Sigwa directed by Joel Lamangan and written by Bonifacio Ilagan was one of the featured full-length films.

One is about a day in the life of a woman on the verge of giving birth and her family in a foreshore land community in Tondo, Manila while the other is about the lives and struggles of workers in a Manila port. 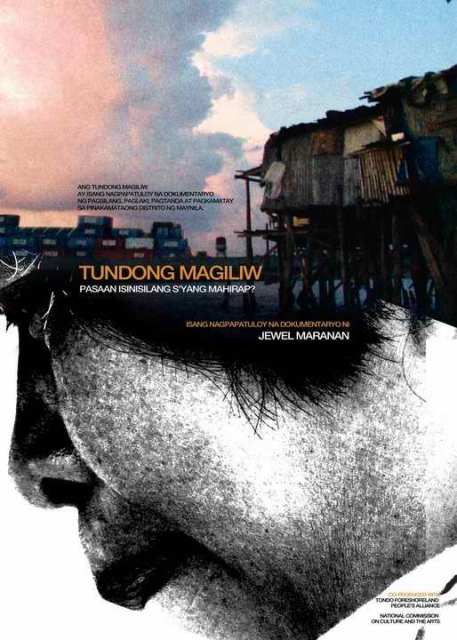 Set in Happyland community in Tondo, one of the densest districts of Manila, Tundong Magiliw is an “immersion into the imprint of prevalent societal relations on life and subsistence.”

The film follows a day in the life of Virgie, a housewife and a mother about to give birth with her fourth child in a storytelling that uses forecasts and flashbacks effectively. As the film progresses, the events unfolding within the four corners of the family’s shanty reflect that of the society’s situation in a tasteful subtlety.

First of four segments, this documentary is filmed in more than a year of Maranan’s immersion in the said community.

Tundong Magiliw is produced by Tondo Foreshoreland People’s Alliance and the National Commission for Culture and the Arts (NCCA).

Maranan is a film graduate from the University of the Philippines.She learned documentary filmmaking in UP Film Institute and practiced political filmmaking with Tudla Productions, a Manila-based alternative media group. She won Best Documentary in the 2008 Gawad CCP for alternative film and video for her film Kung Balatan ang Bawang.

Second is Galaw ng Araw (Movement of the Sun), a 28-minute short documentary about the lives of workers and their families in the ports of Manila directed by Miles Quero-Asa of Mayday Multimedia.

A simple documentary that tells the tales of the everyday survival of the working class, Galaw ng Araw does not lack images of poverty in its most striking forms. The families of the workers enduring daily the lack of food and basic social services are just among these images.

At the center of the film is a trade union that offers living wages as a concrete solution of their status quo.

Quero-Asa is a graduate of the University of the Philippines. She is currently with Mayday Productions, a multimedia institution in the workers’ sector.

Like Tundong Magiliw, Galaw ng Araw was also part of the 2010 workshop “Reinvigorating Documentary Filmmaking in the Philippines” initiated by Goethe Institute Philippines, National Commission for Culture and the Arts, Philippine Independent Filmmakers Cooperative and the College of St. Benilde School of Design and Arts.??This year is the first time Cinemalaya opens its documentary section.