Harry Potter and the triumph of principled resistance

The phenomenon ended in this latest movie, in the second and final installment of Harry Potter and the Deathly Hallows. The final scene in both the book and the movie evoked the sadness of last goodbyes – for us, at least, there’ll be no more new twist to anticipate come the next schoolyear. The story’s main plot has been fully elaborated and concluded, ending with it more than seven years of spellbound anticipation of how the struggle between good and evil in an underground modern wizard world will turn out.

The entire Harry Potter series have been one hell of a train ride, and in a world that’s beset by austerity measures, bloody budget cutbacks, worsening joblessness and poverty, a global economic crisis that refused to go no matter how governments try to paint a rosier scenario with each seeming uptick in some economic activity, the boy who lived presented a fantastic vicarious ride. Here, at least, we have a hero who can defeat the chief purveyor of dark things.

It’s hard to let go of Potter and his friends but in the end, you’re brought to the platform nine and three quarters to bid goodbye to the departing Hogwarts Express. This was probably the best way to end the phenomenon– with you saying goodbye to members of your family that you don’t wish to part with but who have to go, anyway. The obvious message here is: they may have left but they’re just there somewhere. Harry Potter series may have ended but the underground wizarding world is out there. 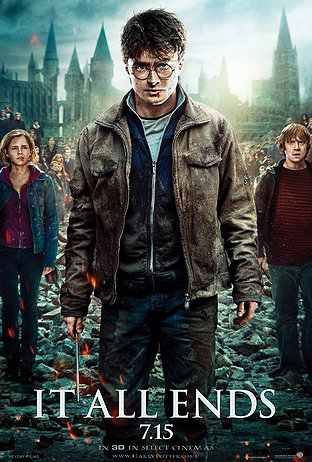 In fact, there are too many goodbyes with such “we’re just here, we never really left, anyway” theme in the final installment of Harry Potter. Dumbledore said he will “go on,” after explaining to Harry that just because they’d met and conversed in his head, doesn’t mean it didn’t happen at all. Harry Potter’s dead parents and godparent and friends sweetened the parting by telling him they had never truly left, they lived in Harry’s heart. The new set of parents among them who recently died in the struggle against the dark lord told Harry they didn’t die in vain and their kid would understand it’s so he would be able to live in a better, more cheery world, or something like that. All these goodbyes sounded just like the last chug on the tracks of Hogwarts Express in the final scene.

After Harry Potter and his friends bowed out of the movies and books, or after he has hurdled his life’s challenge, what he seems to have left behind is the inspiration of his principled, unselfish participation “in their lot’s” struggle. This has united their kind to continue resisting Voldemort.

What Harry Potter has that dazzled his world and our world is his apparent selflessness, which easily prods him into consistently taking a principled stand and doing courageous acts for the real greater good. Even the most brilliant wizard of their time, Albus Dumbledore, has saluted Harry and relied on his taking the right path, the real righteous path if ever there was one, when they crafted the plan that would finally and decisively defeat “the dark lord.”

Saved from death by an old but powerful magic called love, strengthened by his parents’ sacrifice for him, Harry Potter survives with a scar that, if he had chosen, he could have worn like a crown. But except for a summer’s supply of free ice cream at a Diagon Alley ice cream house, he did not use it like that at all. In fact, in all of the seven series, he did some progressively more complicated and dangerous heroic acts that at times led to his being accused of many negative things, from “showing off” to being “the heir of Slytherin”, to being a liar, to being the “undesirable number one”, a fugitive, etc.

Harry Potter series may have been a children’s fantasy book, but it still gave scathing sketches of the corruption, bureaucratism, self-aggrandizement and chauvinism of some people in positions of power. Harry being Harry has not only lost his parents to murder, he as youngster has also become a victim of torture, of malicious branding (physically and figuratively) and what we muggles would call in our world as political persecution, just because he has stuck to the truth and resisted the dictates of those in power.

In fact, this “fantasy series” has also sketched an all too familiar kind of government that, despite well-meaning and hardworking civil servants, cannot be relied on because those in the upper echelons who are calling the shots are looking out more for their comforts and the status quo. The result is, a revolutionary core group (the order of the phoenix) has to take the initiative in fighting the enemy (Voldermort); it’s the school who didn’t shirk from the truth, when their government and media are dishing out hogwash and so, hardly preparing the people (wizards) for the return of the dark lord; and the students themselves have to help prepare for a war by organizing a defense army (codenaming defense against the dark arts as Dumbledore’s Army).

Principled Harry has had many run-ins with the wizarding government – he was even tried once with their full court sitting en banc for a trumped-up charge (performing underage magic, especially before a muggle). Seeking to end discrimination, he himself is friendly to a “mudblood”, to a muggle-loving wizarding family, to an elf who came from a kind of magical beings that are historically “slaves” of the wizards, to a werewolf, to a half-giant, and even to a weirdo but brilliant Luna Lovegood. All that’s missing for him to be well-rounded perfect is friendship with a good muggle, who are unfortunately not very well portrayed in the series, having only the Dursleys to represent them. But perhaps the Dursleys are the wizards’ arguments for why they’d rather go underground.

It was in the last sequel of Harry Potter when they fight their final and decisive battle against the “dark lord”. By this time, Voldemort has already risen, taken over the Ministry (wizarding government), and has been leaning heavily on their media and school. Against the array of its powers, it would be in this final sequel when the principles espoused by Potter and Dumbledore and the order of the phoenix and the D.A. would be thoroughly reciprocated in action across their nation. Here, the wizards and giants and elves and centaurs and even creatures such as Buckbeak would unite to bring down Voldemort and his ‘death eaters.’ The movie version has unfortunately cut down the presence and types of fighters who joined, compensating instead with effects such as the magical defense put up in Hogwarts castle, and the effects of the wizards’ fighting.

The war with the death eaters proceeded not with a physical surround-the-city-from-the-countrysides strategy, but with a close variant of it, and that is defeat-Voldemort-by-first-destroying-his-seven-horcruxes. Here’s where principled Harry again made the correct choice, sacrificing a lot in the process, including a romantic relationship and comfortable existence – he spurned the Ministry of Magic offer to be their gilded “spokesperson” who’d say things are under control, etc.

Instead, he and his friends left school and went for a sort of guerilla war, setting protected/enchanted camps all over Britain until they have destroyed a majority of the horcruxes. Meanwhile the rest of the non-death eaters are doing resistance actions on their own while agreeing to support Potter and his friends. The final surrounding of Voldemort massed up only when Voldemort himself and another horcrux remained to be destroyed.

Potter’s ability to sacrifice even himself, and his life, was part of the war against Voldemort via his horcruxes, and he didn’t disappoint up to the end. Near the end he gave his life willingly, and that, said Dumbledore, made all the difference.

The final Harry Potter sequel also shone light on two surprise heroes, both of whom were transformed by the Potters’ principles. There’s Neville Longbottom, a cowardly, awkward boy who spoke out against Voldemort (and killed one of the seven horcruxes). The other surprise hero is more surprising, because unlike Neville whom we saw only as “weak” and traumatized in the early series, this one we saw in six series as Harry Potter’s greasy nightmare in Hogwarts.

Their ascent to heroic status in the book and in the movie sprang from the extent to which they supported Harry Potter’s struggle against the evil dark lord. The kind of resistance Harry Potter steadfastly showed throughout the series, including his adherence to the truth when some people (wizard) would rather pretend otherwise, has made the act of resisting and fighting as something to be emulated, something cool, inspirational, and a must, as his most heroic recruit, Neville Longbottom, would say near the movie’s climax.