In a study of the proposed 2012 health budget conducted by the Coalition for Health Budget Increase (CHBI), it found out that the increases in the health budget only “define the Aquino Health Agenda of privatization and commercialization of public health care which will further jeopardize the health of the people.”

MANILA – Health workers from public hospitals trooped this week to the budget hearing in Congress, holding a picket at the gates of the House of Representatives to drum up their calls for the government to reverse its “trend of abdicating on health service provision.” As a start, the health workers said, the government should increase the health budget next year to at least P90-billion ($2.09 billion).

“Health is a human right,” the members of Health Alliance for Democracy (HEAD), Alliance of Health Workers, women’s group Gabriela, community organizations and other concerned health advocates who formed the Coalition for Health Budget Increase, repeatedly said in their picket in front of the House of Representatives.

For the members of the new coalition, it would not do to transform health care and services as commodities which, if you cannot pay, you cannot avail of. They argued that if the government truly recognizes health as a right, it would not allow health services to be privatized. The health groups demanded an increase in the budget for operating expenses of public hospitals and government health centers, for disease prevention and for health workers and professionals, among others.

“The country’s patients and health have been suffering a lot already, but the Aquino government is prioritizing the acquisition of battle ships and killing machines,” said Sean Vilchez, deputy secretary-general of HEAD.

In his presentation introducing the health department’s proposed budget for next year, Health Secretary Enrique T. Ona also pointed to the worsening trend in Filipinos’ total health expenditures: the large and increasing share of “out-of-pocket” spending or the spending on health care that the people themselves shelled out at the point of service. In 2007, the latest year for which the government has data, the out-of-pocket spending comprised more than half of the total, dwarfing the share of the government and social insurance.

To address this problem, the health workers in public and specialty hospitals retained by the health department have been demanding for increased budgets. These, they said, would prevent public hospitals from charging its patients especially the poor.

But Sec. Ona has other proposed “solutions” to the problem of high out-of-pocket payments, and the resultant “catastrophic” illnesses (or illnesses that pushed the family of the patient into poverty). Based on his defense of the health department’s proposed budget, Ona raised the need for developing “entrepreneurial capacities” of people working at government health facilities from villages to hospitals. Among others, Ona said, an improved “entrepreneurial capacity” would make more Botika ng Barangays functional. He said 40-percent of government-run Botika ng Barangays are not functional, while 45-percent of the Filipinos’ total health spending in 2007 went to medicines.

Ona also deflected questions about dwindling hospital operational budgets by citing the public-private partnerships (PPPs). Sec. Ona proudly told the lawmakers that through PPPs and enterprise, the health department would not have to resort to asking the government for more budget. Ona also told the legislators about expanding the coverage of government-run Philhealth, even proposing amendments to the law governing it.

Some of his proposals focused on compelling people to enroll in Philhealth, to the point of making Philhealth membership a requirement in securing some government-issued papers such as licenses, or in enrolling children to school. Ona also wanted to target for Philhealth membership more people from the informal sector. At the same time, Ona is also proposing to increase Philhealth’s monthly premiums.

Sec. Ona’s proposal to compel Filipinos to enroll in Philhealth was seemingly patterned after a similar provision in US Pres. Barack Obama’s health care overhaul package, which was recently struck down by a federal appeals court. The 11th Circuit Court of Appeals ruled that the US Congress went beyond its authority by imposing such a requirement on all US citizens.

A portion of the decision penned by Chief Judge Joel Dubina and Circuit Judge Frank Hull read, “What Congress cannot do under the Commerce Clause is mandate that individuals enter into contracts with private insurance companies for the purchase of an expensive product from the time they are born until the time they die.”

According to the Health Alliance for Democracy (HEAD), Ona’s proposals only reveal Aquino’s policy of neglect and unabashed commercialization of public health services instead of dutifully providing it as a public service.

In a study of the proposed 2012 health budget conducted by the Coalition for Health Budget Increase (CHBI), it found out that the increases in the health budget only “define the Aquino Health Agenda of privatization and commercialization of public health care which will further jeopardize the health of the people.”

The major increases in the health budget, as Ona himself pointed out, are in the National Health Indigency Program (NHIP) and in the PPPs. The former is a service of Philhealth, which local governments can use to finance healthcare of their poorest and at the same time invest also on their hospitals and health facilities, to position it better for earning revenues. Ona himself said that if all Filipinos were enrolled in Philhealth, the government hospitals have more opportunities to earn.

“Philhealth is a business that’s pretending to be for public service. It aims to squeeze the public dry in service of the public or private hospitals’ revenues,” said Gertrudes Libang, deputy secretary-general of women’s group Gabriela, in the health workers’ picket protest outside of the House of Representatives.

HEAD said in its statement that health insurance schemes including PhilHealth had not been beneficial as public hospitals remain ill-equipped and understaffed. Past reports of Philhealth revealed that its disbursements have largely gone to private hospitals and not to public hospitals.

Worse, “With the inherent limitation in benefits from PhilHealth, members still spend from their own pockets for their medical needs,” said HEAD in a statement. 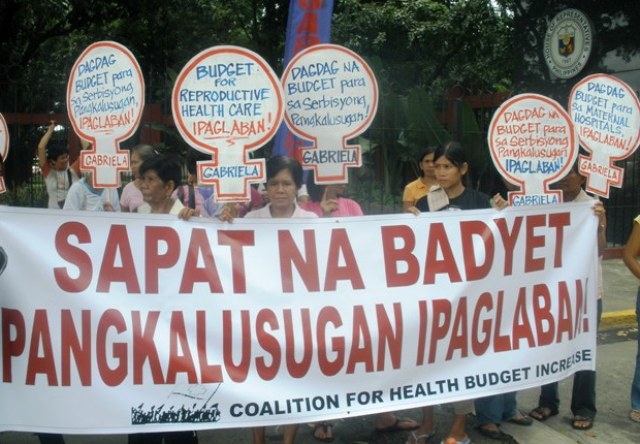 Libang of Gabriela also described the Health department’s touted PPPs as “a collusion to transform public hospitals so health services will be higher-priced.” Ona has proposed another P3 billion ($69 million) for government equity for Public-Private Partnership in 25 regional hospitals, headed by the Philippine Orthopedic Center and Research Institute for Tropical Medicine.

In the end, progressive organizations in the health sector described the Health department’s proposed budget as inadequate where it is needed most and focusing more on thrusts that would only exacerbate the current woes of the sector.

While “The Aquino administration brags about an increase of more than P10 billion ($232 million) in the DOH budget, the said additional funds are not allotted where they would matter more,” said HEAD in a statement. They pointed to the allotment for Maintenance, Operations and Other Expenditures (MOOE) for public hospitals which was only minimally increased if not retained. The Capital Outlay allotment (like in the 2011 budget) is still ZERO, they decried.

The budget for Personal Services (PS) is “surprisingly slightly increased and in other hospitals even decreased when the allotment for personnel should reflect a considerable increase considering the last tranche of the Salary Increase for government employees takes effect next year,” HEAD also noted.

According to HEAD, the proposed 2012 health budget is a far cry from the World Health Organization’s (WHO) recommendation of 5-percent of gross national product (GNP) that should be allotted for health, which is around P440 billion ($10.2 billion). Aquino’s proposed budget “would only result in more commercialization and privatization of public health care services,” HEAD concluded.

The health group challenged the Aquino government to stop the cuts in subsidies for social services, calling for a P90-billion ($2.09b) health budget instead “to ease the greater inaccessibility of health care and to address the immediate needs of health workers in salaries and benefits.”