You Are Here: Home → 2011 → August → 25 → When bringing education to underserved Blaans is being deemed as an act of rebellion

“Why is it becoming harder to be of service to your fellow Blaan? What does the government want us to do?” – Blaan Teacher

Sidebar: News in Pictures: Suffer the little children to go to this school

DLUMAY, Sarangani – (First of two parts) Joy Lasib, 21, does not consider herself an activist. But when she suffered harassment from the military, she said she learned to be strong and to fight for her rights.

A Blaan, Lasib grew up in Davao del Sur, south of the Philippines. Her parents are peasants whose meager income is barely enough to put food on their table thrice a day. She managed to finish high school but they could not afford four years of college.

“I had wanted to take up education in college. But poverty hindered that dream. A mining company offered me a scholarship but our family declined because we do not want to be used. We know what they are doing to our lands,” Lasib told Bulatlat.com. SMI Mining Company has been digging into Lasib’s community in search of gold and other valuable minerals in Matanao, Davao del Sur. “Land is important to us. It is our life and it sustains our needs.”

Since she graduated from high school in 2002, Lasib had helped her parents in household chores. She said she was not able to muster the courage to apply for work because of her educational background. “I am also not confident about my multi-tasking skills,” she explained. Little did she know that a few years later, she would have to pluck up the courage not just to overcome her fear of multi-tasking but fear itself.

In 2008, Her uncle, Yol Lasib, asked if she was interested in teaching Blaan children in a remote area in Sarangani, a neighboring province. She was more than interested. But she hesitated, thinking she was not competent to become a teacher. But she was promised some trainings. 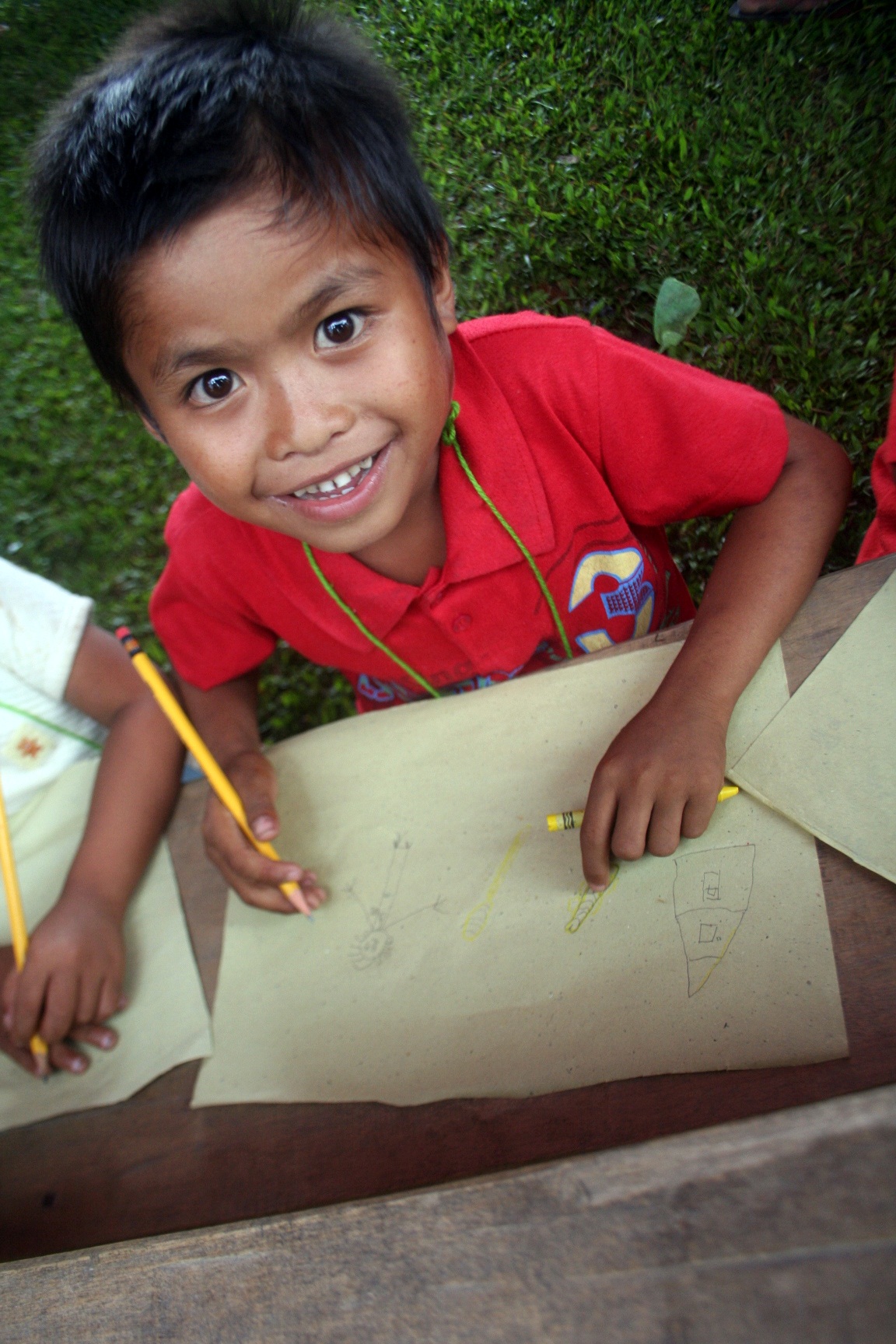 A Blaan child during their psychosocial activity(Photo by Janess Ann J. Ellao / bulatlat.com)

“I thought it would be better to be of help to my fellow Blaans than to stay home doing nothing. So, I agreed,” she said.

The Center for Lumad Advocacy and Services (Clans) and the Sibol ng Agham at Teknolohiya (Sibol) arrived in the community of Sitio Dlumay in 2007. Sibol was then looking for a community with rich water resources for their micro-hydropower electric plant project. Looking closer at the needs of the community, one of the head teachers, Maricel Salem, asked the support of the NGOs in setting up of a literacy school for the children.

In a survey conducted in 2007, the literacy rate in six sub-villages of Upper Suyan was a mere three percent. At that time, most children would have to walk two to three hours a day to go to a formal school in the village proper of Upper Suyan. Malnutrition, parasitism and poor health among the residents were also common. Clans said farming methods remain backward and undeveloped.

Clans then established the Blaan Literacy School and Learning Center. The training of teachers, including Lasib, began in May 2008.

“We were taught that children would find our lessons easier to understand if we used examples readily found in our surroundings,” Lasib said, “And I remember that when I was younger, my teacher would always say that A is for Apple. But I do not know what an apple is.”

Describing her first visit to the community, Lasib related, “It took us nine hours. Halfway on our trek, I stopped and asked permission if I could first cry my heart out,” she said. “It was my first time to experience this. I may be from a far-flung village myself but their situation is far worse than ours.”

She added that upon seeing the children’s conditions, “I realized why I came. The Blaans badly needed our help.”

When their classes began, Lasib noticed that the students were always very enthusiastic and excited about their lessons. There were some, however, who were always sleepy during class hours because most of them were tired from helping their parents both in household chores and in farming. The parents, meanwhile, told Lasib they were very happy when the school began.

“In fact, there are parents who would stay outside the classroom, looking through the windows, because they are also interested in what we are teaching their children. They also want to learn.”

For four years, all went well for the BLSLC. There were 75 and 89 graduates for the first and second school year, respectively. Their age ranged from five to 21 years old. “This was a realization of their age-old dream – literacy, and perhaps, a better life,” Clans said in a statement.

But in November 4, 2010, soldiers from the 73rd Infantry Battalion of the Philippine Army arrived in the community. Whenever they would see Blaans buying rice from neighboring villages, Lasib said, soldiers would accuse them of being supporters of the New People’s Army (NPA), the armed wing of the Communist Party of the Philippines (CPP).

The soldiers interrogated and took pictures of BLSLC teachers and community leaders. The soldiers accused them of being “communist teachers,” especially, said Lasib, after the soldiers saw the school’s opposition to mining, in a poster they pasted at the school.

“They would ask us repeatedly about what the school project is all about and how it was formed. They would also ask us who were the people involved in the project,” Lasib said. Salem, for her part, was interrogated for three hours by soldiers of the 73rd IB.

At that time, Lasib said, the teachers and the rest of the staff of the BLSLC thought they were no longer safe in Sitio Dlumay. “The soldiers told us they would never think twice about killing us if we were anti-government elements,” she said. “We were very nervous.”

Lasib was forced to leave Sitio Dlumay on February 13, 2011. A month later, on March 15, the rest of the staff of Clans and the BLSLC also left the community because of security concerns. “When we welcomed the staff back in General Santos, we were all crying. The students that we had and their parents too were in our minds.”

Not only the teachers but the community leaders, too, were harassed by the military. Francisco Manangka, 35, was repeatedly visited by soldiers in his house. The soldiers ordered him not to believe a single word the staff of Clans are saying because their “teaching style is similar to that of the NPAs.”

On March 22, along with eight other community leaders, Manangka was forcibly taken to the 73rd IB military camp in the guise of being “invited” by the Malapatan mayor. Though he had not wanted to come, he told Bulatlat.com that he was forced to go. “They were armed; we were helpless,” he explained.

The community leaders were interrogated repeatedly and against their will; they were ordered to appear in an interview by a television news station. They were held in the military camp for three days.

Manangka’s wife Nora was also interrogated by soldiers for two hours. “We were told that Clans was only deceiving us to get our rice,” she told the fact-finding team.

“We were also warned that children would be taught to fight the government.” Nora clarified to the fact-finding team that the rice the households were collecting for the BLSLC teachers are tokens of their gratitude for their commitment in teaching the children.

The soldiers lived in Manangka’s residence for three months. She asked the soldiers not to stay in her house because she feared that her family might get caught in a crossfire if the NPAs attacked. “If they want to come to our village, they are very much welcome. But it is different if they decided to live here.”

Children, too, were harassed by members of the 73rd IB. The military made a 10-year-old boy, who was also a student of BLSLC, hold a gun while pictures of him were being taken. The soldiers, according to Clans, threatened the boy with a needle. The soldiers warned the boy they would sew his navel. “The mission team heard the boy narrating how he shook hard when the soldiers threatened him and made him hold a gun,” Clans said in their report.

In another instance, a child from a neighboring village said an encounter between the military and the NPAs took place near his house. Later, the soldiers went to their house and “interrogated him at gunpoint, asking him for the whereabouts of the NPAs.”

“It is the children who are suffering,” Lasib said, “Why is it becoming harder to be of service to your fellow Blaan? What does the government want us to do?”