MANILA – Marking the International Day of the Disappeared, more than a hundred relatives and colleagues of missing activists gathered today in front of a mall in Quezon City where Jonas Burgos was taken.

Protesters put up a signage that read: “Mag-ingat sa mandurukot. Dito dinukot ng mga militar si Jonas Burgos.” (Beware of thieves. This is where the military abducted Jonas Burgos.) Jonas was abducted on April 28, 2007 inside the said mall while having his lunch. He remains missing to this day.

“This sign is a reminder to the public that disappearances continue to happen, and that one can never be sure of his or her own safety even under the Aquino administration,” Mary Guy Portajada, secretary general of the Desaparecidos, Families of the Disappeared for Justice, said.

“We remember the 206 individuals who were victims of enforced disappearances under the Gloria Macapagal Arroyo government. They were farmers, workers, indigenous peoples, youth and students, women, church workers, human rights defenders, freedom fighters. They were among those who dared lead and were part of legitimate voices of opposition to the anti-people, corrupt, and repressive policies of the previous government. For this reason, they were vilified and maligned as enemies of the state, and then abducted by elements of the Armed Forces of the Philippines and the Philippine National Police, never to be seen again up to this day,” Cristina Palabay, convener of End Impunity Alliance, said.

“The persistence of this practice and the continuing reports of disappearances under the present regime have diminished our faith of achieving justice for our loved ones under Aquino’s leadership.” Portajada whose father Armando has been missing since July 31, 1987, said. 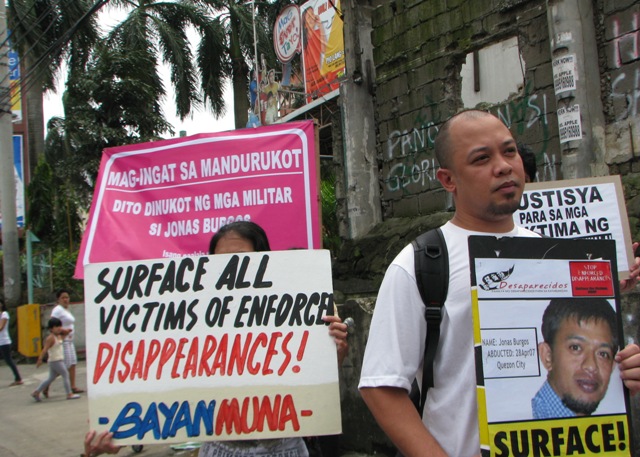 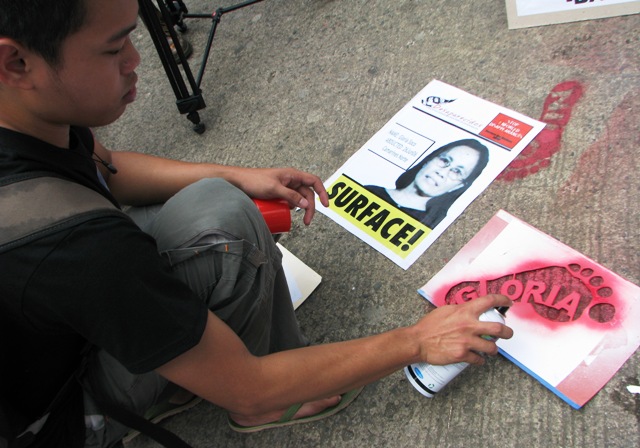 Ipe Soco has been searching for his mother Gloria for five years now.(Photo by Ronalyn V. Olea/ bulatlat.com)

Portajada said Aquino has not done anything for their missing loved ones. During the first months of the Aquino administration, Desaparecidos called on Aquino to open all military camps and safe houses and to order the military to surface victims of enforced disappearances.

In her speech, Lorena Santos, deputy secretary general of Desaparecidos, called on the Aquino administration to enact the bill seeking to criminalize enforced disappearances. Santos’s father, Leo Velasco, a consultant of the National Democratic Front of the Philippines (NDFP), was abducted by alleged state agents on Feb. 19, 2007 in Cagayan de Oro City.

“Perpetrators should be punished,” Santos said.

Santos said the bill filed at the Lower House is not moving.

Santos said the military has been insisting that the bill should include non-state actors as perpetrators of enforced disappearance.

Article 2 of the United Nations International Convention for the Protection of All Persons from Enforced Disappearance defines “enforced disappearance” as, “the arrest, detention, abduction or any other form of deprivation of liberty by agents of the State or by persons or groups of persons acting with the authorization, support or acquiescence of the State, followed by a refusal to acknowledge the deprivation of liberty or by concealment of the fate or whereabouts of the disappeared person, which place such a person outside the protection of the law.”

“The burden to protect the citizens is with the state. Sadly, the state uses its machinery and resources to abduct, arrest or kill persons it deems as enemies,” Santos said.

Santos also called on the Aquino administration to ratify the United Nations International Convention for the Protection of All Persons from Enforced Disappearance, which outlines the responsibilities of state parties in protecting its citizens from such crime.

Santos noted that even war-torn Iraq already ratified the Convention and yet the Philippines, “a supposedly democratic country,” has not signed it yet.

The End Impunity Alliance expressed support to Editha Burgos, Connie Empeño, and Linda Cadapan who filed charges against the alleged abductors of their children.

On May 4, Mrs. Empeño and Mrs. Cadapan, mothers of University of the Philippines (UP) students Karen and Sherlyn who have been missing since June 26, 2006, filed charges against retired Gen. Jovito Palparan Jr. and other military officials. The Department of Justice (DOJ) has been conducting preliminary investigation on the complaint.

On June 9, Mrs. Burgos filed criminal charges against military officials involved in the abduction of her son Jonas. Hearings will start tomorrow.

The End Impunity Alliance has also taken the campaign on the internet, calling on Facebook users to take down their profile pictures on this day to symbolize their solidarity with the victims of enforced disappearances and their families.

Portajada also slammed Aquino’s counter-insurgency program Oplan Bayanihan, which, she said, explains the occurrence of abductions and enforced disappearance. “No amount of repackaging can change the fact that anti-insurgency programs such as Oplan Bayanihan are designed to pacify and neutralize those who pose a threat to so-called government development programs. The state through its Armed Forces of the Philippines will continue to use whatever means it can to silence its critics.” Portajada said.