Literally, Pangarap Village is the fulfillment of the dreams of the residents. The land was awarded to them in 1973 by then president Ferdinand E. Marcos. But the Aranetas came back to once more stake its claim to the land, emboldened by a Supreme Court order in 1988 and the ascension to power of one of their own Mar Roxas.

SECOND PART: Aquinos and Aranetas conspiring vs ‘land to the landless’ and the urban poor

PANGARAP VILLAGE, Caloocan – (First of two parts) Husband and wife Rommel Fortades, 36, and Teng Sevilla, 30, both grew up in Pangarap Village, which for them had been aptly named because this is where they had first woven their dreams together. As such, when the landlord Araneta family renewed its claim to the land where Pangarap Village sits on, and the Aranetas intensified their efforts to drive away the village residents, Fortades and Sevilla were among the first to barricade and protect their homes.

A skilled, former employee of an ad company, Fortades had started a small silkscreen printing business. Sevilla said Mel, as most people call Fortades, is a responsible partner and father to their two-year-old son Angelo. “He is not really sweet but he has his own ways of expressing his love for us,” she said.

“He is the kind of person who would fight as long as he knows it is only right,” Sevilla said. “Mel has good intentions so I did not bother telling him to stop what he’s doing.”

Fortades engaged actively in online activities to support the residents’ struggle in Pangarap Village. He is the person behind the Facebook Page “Kuto ni Araneta,” (Araneta’s lice). With camera and video at hand, he documented and posted materials online to inform people about what the residents of Pangarap Village were going through. 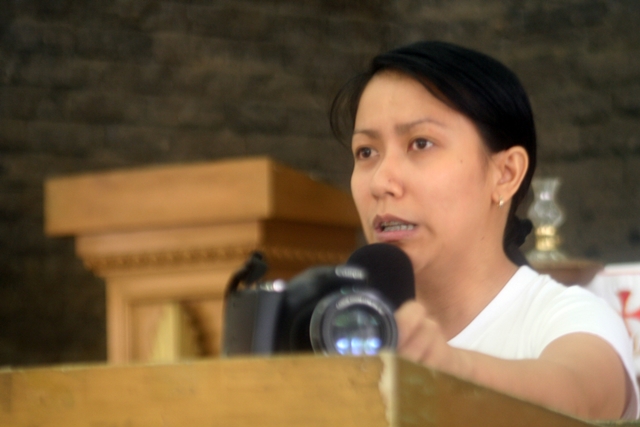 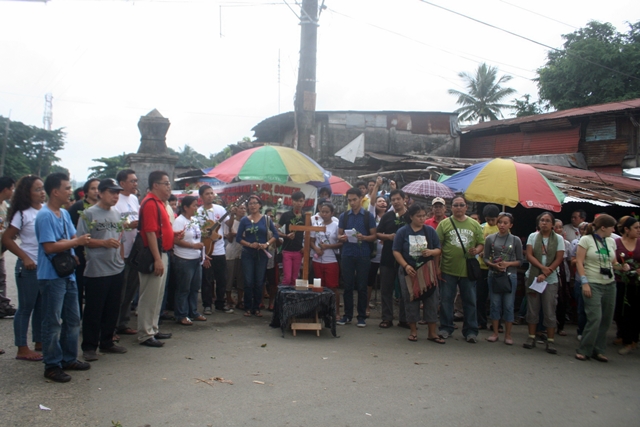 Teng Sevilla takes the role of her late husband Rommel Fortades in documenting the struggles of the residents of Pangarap Village.(Photos by Janess Ann J. Ellao / bulatlat.com)

“I warned him to be more careful.” At that time, she entertained thoughts of leaving Pangarap Village for somewhere “more peaceful.” She said all she dreamt about is having a complete family.

But Fortades and his family chose to stay and fight for their stake in Pangarap Village.

On July 23, Sevilla woke up around 6:30 a.m. to find out that Fortades had already been out of bed. She said Fortades developed a habit of waking up early to visit the people’s barricade because the Araneta’s demolition team normally arrives at dawn.

And then Sevilla heard gunshots. A neighbor told her that her husband was shot.

The neighbors brought the bleeding Fortades first to North Caloocan Hospital but it refused to service them, citing insufficient medical facility for Fortades’s gunshot wound. They brought him next to Commonwealth Medical Hospital. Following them in this hospital, Sevilla arrived in time to see the doctors trying to revive her husband.

“I could not approach him because I could not believe that I would lose him. I kept asking myself at the time: ‘Is he going to die?’ I wanted to cry out but I was afraid he might hear me,” Sevilla said. When she finally plucked the courage to stand beside him, “I finally held his hand and told him that ‘Love, let us go home for Gelo.'”

Sevilla did not want to believe it. She said if the doctors did not want to continue with the CPR, she was willing to do so, all day and all night. But when she took a look at Fortades’ eyes and at the gunshot wound in his temple, the truth finally hit her.

“I admit that I had been selfish and my family is my priority. But it was only when he was already gone that I finally truly learned and appreciated why Pangarap village is worth fighting for,” Sevilla said. “It is just sad that he was already gone before it dawned on me.”

Sol, son of a soldier and land-beneficiary

Teresita Gomez, 69, mother of Soliman Gomez, 44, who was more known to his family and friends as Sol, said she had not appreciated what her son was fighting for until he was killed on July 23. “I had tried to stop him (from joining the fight for our land) but he insisted, saying this was the only thing that his father had left us,” she told Bulatlat.com.

It was natural, Teresita said, for Sol to feel so strongly about their right to their home. Sol Gomez, fifth in Teresita’s 10 children, had always tagged along his mother in all her household chores. The two became closer after the death of Gomez’s father, a soldier and a beneficiary of the land in Pangarap Village under the late president Ferdinand Marcos’s program, in 1983.

“That is why I would miss him terribly because we had always been together, helping each other,” she sobbed.

Teresita said Gomez had grown up a good son and a good person. Even after getting married to Catalina in 1987, she said Gomez’s love for his family never changed.

Catalina, 44, said Gomez was a very caring husband and father to their three children. “Even if he was tired from work, he would make sure to spend time with us.”

She added that given Gomez’s personality, it was impossible for him not to help the other residents of Pangarap Village in their struggle to keep their homes. Catalina said she could barely sleep then. “My neighbors urged me to stop Gomez from being active against the demolition, but I did not do it because there was no way I could stop him,” she said. The house where they live is a product of Gomez’s hard work, after all,” she said.

Gomez was among the residents who initiated the vigil when the threat of demolition of their homes intensified. “He said vigil and prayers would work against what the Aranetas are doing. But our efforts were met with violence.”

The Gomez family first heard the ringing of bells, their signal when there are harassments at the barricades. Catalina went out to check and saw Araneta’s security guards harassing the vigil. When Gomez saw his wife Catalina, he told her to go home. “But I said I would only go home when he does.”

“I was pushed to lie down when we heard the gunshots. I heard someone saying Fortades was killed and that my husband was also hit. All those who were trying to help were also being fired at by the security guards,” Catalina said.

Like in the case of Fortades, the North Caloocan Hospital also refused to treat Gomez, saying they do not have enough facilities to attend to his wounds. So they brought him to San Lorenzo Hospital “even if I feared he was dead already,” Catalina said.

As for Gomez’s mother, she said, when she heard of the shooting, “I thought I was going to die. My son had given his life so I can live,” Teresita said.