You Are Here: Home → 2011 → September → 15 → Filing of ‘trumped-up charges’ vs activists continue under Aquino

Filing of ‘trumped-up charges’ vs activists continue under Aquino

Karapatan stressed that the president is capable of releasing political prisoners as he did when he released rebel soldiers. “All he has to have is the political will to release those who are wrongly imprisoned.” – Marie Hilao-Enriquez, Karapatan.

MANILA – Seventy-seven activists have been charged with fabricated charges under the new Aquino administration, according to human rights group Karapatan.

“Among the notorious legacies of the Marcos dictatorship was the illegal arrest and detention of political prisoners who fought against the corrupt and repressive regime. Such reality exists to this day, with 360 political prisoners languishing in jails for fabricated and trumped-up charges because of the exercise of their political beliefs that run counter to those of the powers running our government,” Angie Ipong, former political prisoner and Selda secretary general, said.

“President Aquino should look at the mirror of history twice when he likens activist organizations to a dictatorship. His administration is actually carrying on the more vivid legacy of a dictatorship with such rights violations under his term,” Ipong said, referring to Aquino’s remarks against the League of Filipino Students (LFS) in his recent speech.

This is the second time political prisoners and their supporters held a fast to demand for general, unconditional and omnibus amnesty. The first was held in July in time for President Aquino’s second State of the Nation Address (Sona).

Karapatan stressed that the president is capable of releasing political prisoners as he did when he released rebel soldiers. “All he has to have is the political will to release those who are wrongly imprisoned,” Marie Hilao-Enriquez, Karapatan chairwoman, said. 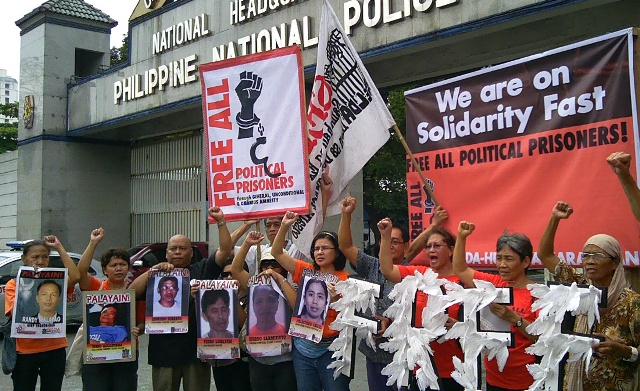 Under Aquino, only six political prisoners have so far been released, including Ipong, and consultants of the National Democratic Front of the Philippines (NDFP) namely Jovencio Balweg, Jaime Soledad, Glicerio Pernia and Maria Luisa Purcray. Multiple common crimes filed against them have been dismissed.

In a message, Sandino Esguerra, a political prisoner who has been detained for more than ten years at Camp Bagong Diwa in Taguig City, said Aquino “has no reason not to heed their demand for freedom.”

“The political prisoners are falsely accused of crimes they have not committed, contrary to Aquino’s continued mantra that his government is for human rights,” Enriquez said.
Enriquez said such practice intends “to hide the government’s political persecution of those it labels as enemies of the state.”

“During martial law, activists were charged with rebellion and subversion. When Cory came to power, the filing of fabricated criminal charges against activists started,” Ocampo said.

Ocampo was among the hundreds of activists detained during martial law. He was arrested in 1976 and escaped from jail in 1985. During the first Aquino administration, he and his wife Carolina Malay were charged with murder, kidnapping and illegal possession of firearms—charges that are non-bailable — and were arrested in August 1989.

“Even if the charges were fabricated, it took three years before we were released on bail,” Ocampo said.

During the Arroyo administration, rebellion charges were filed against Ocampo and five other representatives of progressive party list groups. The Supreme Court eventually dismissed the case, finding no sufficient evidence.

After the 2007 elections though, murder charges were once again filed against Ocampo and several NDFP consultants. He was arrested and released on bail.

“These incidents show that the filing of trumped -up charges against government critics are incredible,” Ocampo said. Since martial law, Ocampo spent more than 12 years in detention.

Ocampo pointed out that under the Comprehensive Agreement on Respect for Human Rights and International Humanitarian Law (CARHRIHL) which the NDFP and the Government of the Republic of the Philippines (GRP), now called the Government of the Philippines (GPH), signed in 1998, the GPH must review all cases of detained, arrested, even convicted activists charged with common crimes, in violation of the Hernandez political doctrine. The said Supreme Court jurisprudence prohibits criminalization of political offense.

For his part, Fr. Dionito Cabillas of Selda said detention facilities are “instruments of state repression.”

In his message, Esguerra said they are deprived of decent meals, are not allowed to have regular sun exposure. He said their visitors are subjected to strip search.

“We are taught that private parts should be covered, but in jails, it’s the other way around. If you do not agree to this strip search, you are denied the right to visit,” Cabillas said, referring to Camp Bagong Diwa detention facilities.

At the Philippine National Police (PNP) Custodial Center inside Camp Crame, headquarters of the PNP, Cabillas said each prisoner may be visited by a maximum of ten visitors and only twice per week. “Each visitor must submit all personal information before being allowed to visit. Questionnaires for prisoners must first be approved by jail authorities,” he said.