KMU said the strong Sept 19 protests combined with transport strike in some areas succeeded in explaining the just bases of the protest to the public, effectively garnering their sympathy and support.

MANILA – Public transport was limited or halted at the height of the Sept 19 transport strike called by PISTON (Pinagkaisang Samahan ng mga Tsuper at Opereytor Nationwide) and other allied nationwide transport organizations. The strike was most severely felt in Mindanao and a significant part of Southern Tagalog and Metro Manila, said the Kilusang Mayo Uno in a statement.

But the Aquino government belittled the strike, saying it was barely felt because there were no stranded passengers and there was still heavy traffic in Metro Manila. The government did not connect the apparent lack of stranded commuters to the fact that its local government units fielded buses for free ferrying of stranded commuters, on top of the 200 military trucks dispatched for free rides.

It also did not make the connection as aired in mainstream TV reports that there were more private cars on the road that day, because the government, led by Metro Manila Development Authority Francis Tolentino, cancelled the number coding scheme for the day.

Along with 200 military trucks, the Aquino government fielded 17,000 fully armed soldiers and police to prevent the protesters from urging their fellow drivers to support the strike. 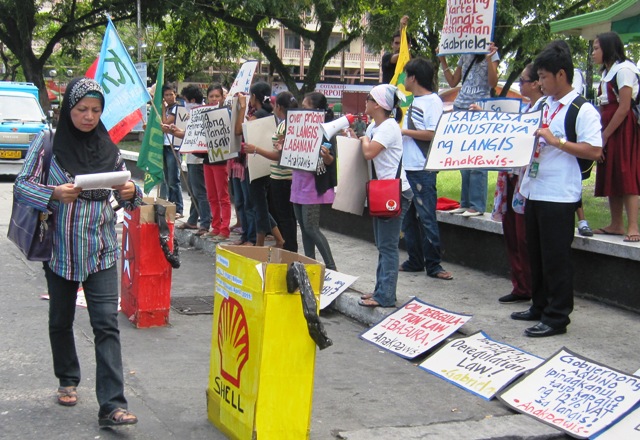 According to the KMU, the strong Sept 19 protests combined with transport strike in some areas succeeded in explaining to the public the just bases of the protest, effectively garnering their sympathy and support. They added that they mobilized as much as 5,000 people, excluding the drivers, in Metro Manila, and tens of thousands more in protest centers and strikes in other parts of the Philippines.

Protests and sympathy for protesters in many places

“Today, it is high time that we act, support and raise the people’s capacity to resist and counter-act by an ever widening mass protest the inutility and neglect of the Aquino regime in solving the Philippine crisis,” Flor Acbo, chairperson of BAYAN in Eastern Visayas said.

He viewed the mass actions held in Eastern Visayas as “indication of the peoples’ spontaneous reaction to fight back, which still needs to be raised into organized action.”

The global alliance of overseas Filipino workers (OFWs) and their families also joined the Sept 29 protests and strike against oil price hikes and overpricing by big companies. “With the recent global debt crisis, remittance-dependent families are in a very vulnerable and dangerous place. The dollar depreciation combined with the never-ending spate of oil price hikes and the continuous swell in the inflation rate will have an ominous impact on OFWs and their families,” Garry Martinez, chairman of Migrante International, said.

In just six months, oil companies operating in the Philippines have been recorded to have increased their prices 18 times. Martinez said OFWs send an average of P8,000 ($184) per month to their families to cover expenses for rent, food and other utilities. “Given the continuous oil price hikes, how would OFW families juggle the meager remittances sent in by their OFW?”

“President Aquino seems to worry more about the profits of big oil companies than our welfare. Our families have to contend with the shrinking value of our remittances while many of us have to even work harder, to endure even worst conditions in other countries, just so our children can eat and go to school,” said Martinez. He explained that if only Aquino had wanted to, his government has options for stopping oil price hikes. 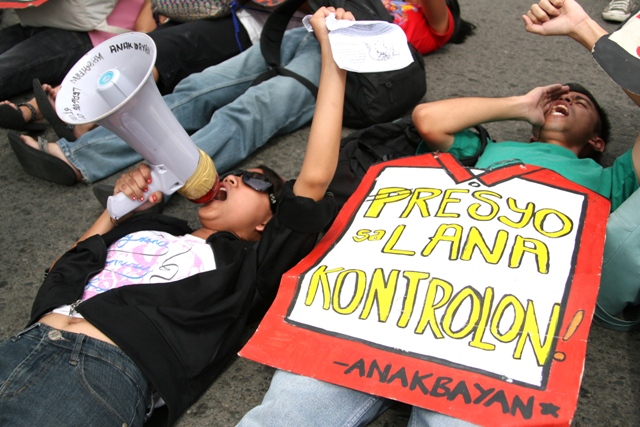 Students also made a big statement of supporting the Sept 19 strike by “planking” the streets, that is, by lying down on a busy street to picture the Filipinos’ plight. Terry Ridon, national chairman of League of Filipino Students, said student involvement is “imperative” in this transport strike, as students themselves are bearing the brunt of increasing costs of school supplies, books and food due to the higher costs of transporting such goods.

He said students themselves would have their own strike against the budget cuts in state colleges and universities this week. He also scored DOTC Mar Roxs’ statement against their “planking” as “unfortunate,” considering that Roxas is “fervently soliciting student support whenever he needs a dose of political legitimacy.”

State employees from the Confederation for Unity, Recognition and Advancement of Government Employees (COURAGE) participated in the nationally-coordinated People’s Protest and Transport Strike vs. Oil Overpricing. The group maintained day-long protest centers in front of the National Housing Authority in Quezon City, at Victoria Mall, Monumento and the LRT Quirino Station (Northbound), with protests peaking with a simultaneous noise barrage at around 12:00 noon.

As it is, the state workers said they are already struggling to subsist on their meager salaries. With the recent spate of oil price hikes, most of the country’s 1.3 million government employees are said to be living in abject poverty, are prey to loan sharks and could barely make it to the next day’s work, said Ferdinand Gaite, national president of Courage.

In fact, based on Courage’s computations, government employees with Salary Grades 5 and below spend almost a fourth of their wages on transportation costs alone—costs which they warned will balloon unless concrete steps are taken against oil overpricing and oil price hikes.

In Davao City, women wearing purple shirts took off for a “rage run” (as against “fun run”) from Acacia street going to People’s Park. They also held a short program at the park.

For the progressive group Gabriela, the succession of oil price increases that have taken its toll on women and their families because of high prices of commodities is “no fun,” said Corazon Espinoza, vice chairperson of Gabriela and head of the urban poor women’s group Samahan ng Maralitang Kababaihang Nagkakaisa (Samakana).

Even the Church “has no option but to side with the most afflicted and oppressed,” said Nardy Sabino, general secretary of the Promotion of Church People’s Response.

Sabino criticized the Oil Deregulation Law that gives oil companies the freedom to use their own mysterious computation of profit margins. “It is sinful for oil companies to amass more profits at the expense of the people specially the ordinary folk. Have the oil companies’ owners and executives skipped meals because they cannot afford the food? Have they denied their children education because they do not have money to send them to school? Have they become poorer like that of an ordinary jeepney driver? They do not know what it takes to be poor and suffering,” said Sabino.

The so-called Big Three oil cartel (Shell, Petron and Caltex) rake in huge profits due to oil overpricing, said Gaite of Courage. He said Petron earned a massive P296 billion last year, while Shell and Caltex earned P198 billion ($4.57b) and P100billion ($2.31b) respectively. The glaring disparity between the profits of the Big Three and the meager wages of the country’s employees are what prompted the people into action, said Gaite. He said this is also why they joined the Sept 29 multi-sectoral protests, “to condemn the insatiable greed of the oil cartel and the apparent collusion between the Aquino administration and the Big Three.”

In a statement, Jaro Auxiliary Bishop Gerardo Alminaza, one of the conveners of CWS (Church People-Workers’ Solidarity), also expressed concern over reports that both oil companies and the Philippine government are raking in billions in profits and revenues at the expense of the ordinary consumers.

Quoting the Church’s social teachings, Bishop Alminaza said “governments must work for the realization of the common good. It has also the duty to protect the rights of all its people, and particularly of its weaker members, the workers, women and children.” (Blessed John XXIII’s Mater et Magistra, No. 20)

“Oil prices have increased more than 20 times since January 2011, and this is causing added burden not only to drivers and operators but to workers, peasants, fisherfolk, and their families,” Bishop Alminaza said. He noted how the unabated oil price hikes further erode the value of the workers’ already low income, and how it is “far worse for workers whose jobs and income are both irregular.”

According to Ibon Foundation, the profits of the oil firms since 2001 have amounted to P141.7billion ($3.27b) in 2010. The Philippine government has also been getting revenues of P48 billion pesos annually or a total of P239.6-billion ($5.53b) in the last five years due to the 12 percent VAT on oil, according to a study by Ibon.

“Profit at the expense of the poor is immoral and unjust. The Church is very clear in its teachings that the well-being of our toiling brothers and sisters should come first before profits. Government must regulate oil industry to moderate the greed of private oil firms,” said Alminaza, explaining that “the welfare of the majority must be prioritized.”