“Spending on SUCs and education is an investment to develop our country’s human resources. Congress and the Aquino government should rethink its misguided priorities and realign funds from foreign debt, CCTs, and military spending in favor of education and social services.” – JC Alejandro, League of Filipino Students

MANILA — Thousands of students, together with members of the faculty, non-teaching personnel and administrators of the Polytechnic University of the Philippines marched hand-in-hand in a show of unity to call for sufficient government subsidy to higher education.

PUP’s unity march is part of the week-long nationwide strike of students, which was prompted by Aquino’s budget cuts on state universities and colleges. In the 2012 budget, about $13.15 million was deducted from the already too meager allocations that government provides to higher education institutions.

In a Manifesto of Unity, signed by PUP administrators, faculty and student organizations, they said that for the past five years, their budget is “always at the edge of the cliff because of budget cuts.” Last year, PUP’s allocation for its Maintenance and Other Operating Expenses, was slashed by $544,000. PUP is considered as the country’s largest state university with 20 campuses nationwide and a student population of about 65,000.

In the proposed 2012 budget, the Manifesto of Unity read, there appears to be an increase of $1.32 million in its budget. However, they said, $1.07 million from this amount would be allocated to Personal Services, which is in accordance with the salary adjustment provided for by Salary Standardization Law 3. Only the remaining $243,877 would be allocated to its MOOE.

“It is quite deceiving if we were pacified with this dubious budget proposal because, the University Budget Services stated, PUP needs $46 million to operate.

No budget for capital outlay 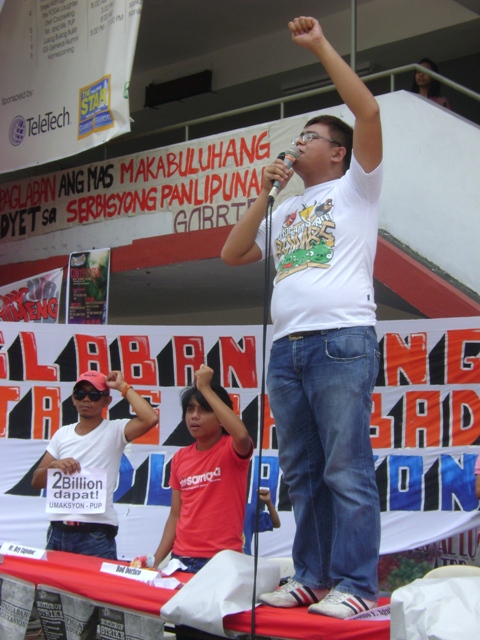 Similar to other state universities and colleges, the PUP has no allocation for capital outlay, which, according to the PUP’s Manifesto of Unity, is “essentially intended for Land and Land Improvement Outlay, Building and Structures Outlay and finally for Office Equipment Furniture and Fixtures” with an estimated amount of about $15.33 million.

Kenneth Evangelista, a second year student from PUP’s College of Technology, said their administrators have always been justifying their high tuition fees, which is $6 per unit (compared to the main campus’s $0.28), because of the supposed high end facilities and laboratories that they would have. “But it is not true,” he told Bulatlat.com.

Evangelista said that in their keyboarding classes, their professors ask them to bring makeshift keyboards drawn on an illustration board. “At times we would just raise our hands in the air and imagine the keyboards. I do not know how our professors determine whether we type the correct or wrong letters.”

He added that they always do their activities in their computer classes by groups because there are very few computers, no more than 10 units per laboratory. In software classes, there were times, Evangelista said, that their professors ask them to watch videos in Youtube demonstrating how the software is bering manipulated. They are then required to write a reaction paper on it.

“School facilities and laboratories are there to facilitate the learning process of students. If we have poor facilities, then it should be expected that the quality of education would also deteriorate,” PUP student regent Aguilar said.

Aguilar said PUP has not been receiving a budget for Capital Outlay for the past five years.

Other state universities and colleges nationwide also staged protest actions to denounce the budget cuts. “From petitions for dialogues to open letters, we have exhausted all means of asking President Aquino for a budget which will allow our university to function without resorting to fee increases. It seems President Aquino is playing deaf to our entreaties for decent funding for our university,” said University of the Philippines (UP) student regent Krissy Conti in a statement.

The country’s premiere state university UP with a population of some 52,000 students is currently operating on a $132.7 million budget, after last year’s biggest budget cut amounting to $31.52 million. In the proposed 2012 budget, however, the allocation for the UP system was further reduced by $4.92 million, thereby reducing the allocation further to $127.87 million, which, according to youth groups, is a far cry from the $392.4 million that UP needs to operate its seven constituent units, including the Philippine General Hospital.

To show their outrage, hundreds of students staged a “freeze mob” at the Palma Hall lobby and held noise barrages around the campus. Students from the UP Manila campus, on the other hand, wore a “we are on strike” shirts. They also held a flash dance, where they also launched their jingle titled “Born This Way-Budget Cut,” a parody of Lady Gaga’s song Born This Way. The students also “planked” or did a “die-in” protest along Padre Faura street.

Some students wore laboratory gowns with “no to budget cut” written on them to signify the measly subsidy for health services as well.

“Students have crafted creative activities and engaged in massive build-up actions. These are a concrete manifestation of the youth’s rage against the systemic neglect of social services,” said College Editors Guild of the Philippines national deputy secretary Gidget Estella said.

In Panay, the Northern Iloilo Polytechnic State College’s proposed 2012 total budget is lower by $118,725 while the Aklan State University’s budget is $210,716 lower compared to this year’s budget. The Western Visayas State College of Science and Technology’s Personal Services allocation is lower by $72,856 while Western Visayas State University’s MOOE is down by $86,603.

“The P238 billion allotments for basic education cannot even address the massive shortages in teachers, classrooms, chairs, and textbooks. This is way below the minimum 6 percent GDP education spending mandated by the UNESCO. To say that the 2012 budget is social services-friendly is therefore deceptive,” said WVSU-University Student Council officer Krisma Porquia.

The recent budget cut has turned into a unifying issue for all the stakeholders in state universities and colleges. In PUP, for example, the burning of dilapidated chairs by students protesting the impending 2,000 percent tuition hike earlier this year, heightened the differences between them and the university administration. This changed when the whole PUP community marched hand in hand against the budget cuts.

“Our problems could not be resolved internally, even if we change the unversityl president. The only solution is a sufficient budget,” Dr. Samuel Salvador, vice president for Academic Affairs, said during the press conference. “A sufficient budget is key to quality education.”

Aside from their manifesto of unity, PUP’s key administrators, non-teaching personnel and student organization issued a statement against the budget cut. Salvador also issued Office Memorandum Order No. 8, Series of 2011, urging his fellow faculty members and students to support the activities of student organizations against the insufficient budget given to higher education.

UP Diliman Chancellor Caesar Saloma and faculty members declared their opposition to the budget cut in a faculty forum on the 2012 national budget. UP President Alfredo E. Pascual, for his part, also called for an increase in government subsidy to UP. “Government financial support for UP is not an expense, but an investment that will yield copious dividends for our country and people,” Pascual said in a speech he delivered during his investiture at the University Theater of UP Diliman last September 15.

“What we are pushing for, what we are fighting for is not just for us. We are on strike to ensure that the government sets its priorities straight for the coming generations of Filipinos,” Einstein Recedes, president of the National Union of Students in the Philippines, said.

Recedes added that if students will not demand for their right to quality and accessible education, future Filipino students would have nothing to look forward to but dilapidated school facilities, sky high tuition fees and more students dropping out of school. “We are engaging the government today to make sure that this would not happen,” he said.

On September 23 youth groups will once again march to Mendiola “to show their rage against the budget cuts.”

“Spending on SUCs and education is an investment to develop our country’s human resources. Congress and the Aquino government should rethink its misguided priorities and realign funds from foreign debt, CCTs, and military spending in favor of education and social services,” League of Filipino Students Panay Regional Spokesperson JC Alejandro said.