“President Aquino reminisces about his family’s sufferings under Martial Law, but he callously ignores the suffering of other families whose loved ones are jailed not under martial law, but under the Aquino government.” — Marie Hilao-Enriquez, Karapatan chairwoman

MANILA – On the 39th anniversary of the imposition of martial law, human rights advocates and other groups called anew on President Benigno S. Aquino III to release all political prisoners.

Karapatan said there are 360 political prisoners still languishing in jails today. Seventy-seven of them were jailed under the new Aquino administration.

“Today’s commemoration of the 39th year of the declaration of martial law is again an occasion for the President to reminisce the experience of how he and his family suffered under martial law… But even as he recalls the suffering of his family, he callously ignores the suffering of other families whose sons, daughters, wives, husbands, fathers and mothers are detained, not by the dictator but by his government, not 39 years ago, but today,” Marie Hilao-Enriquez, Karapatan secretary general, said in a statement.

“To our knowledge, we have no political prisoners,” said Presidential Spokesman Edwin Lacierda.

“Under the Marcos dictatorship, it is clear that there were political prisoners. In this sense, Marcos is better. Now, they (Aquino) refuse to recognize the existence of political prisoners, preferring to call them as ‘alleged political offenders,” said Casambre, Rey Claro Casambre, executive director of Philippine Peace Center. This he attributed to the filing of trumped-up charges and other criminal offenses against activists. 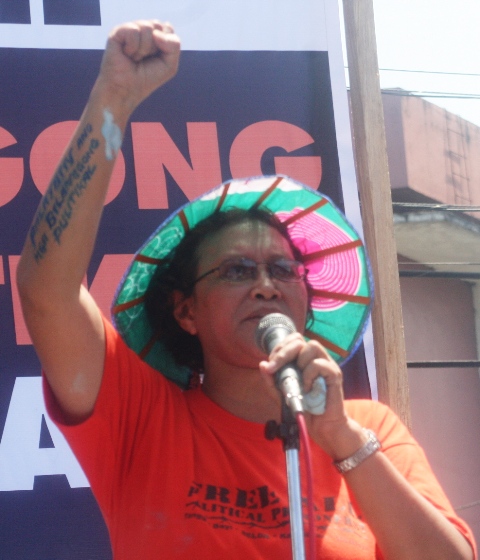 Casambre pointed out that the arrest and continuing detention of 13 consultants of the National Democratic Front of the Philippines (NDFP) violated the Joint Agreement on Safety and Immunity Guarantees (Jasig) and the Comprehensive Agreement on Respect for Human Rights and International Humanitarian Law (CARHRIHL).

Alan Jazmines, one of the NDFP consultants, said in his message from prison that the Government of the Philippines (GPH) needs to abide by previous agreements and exercise goodwill measures for the smooth continuation of the peace talks. This the GPH could start doing by releasing all political prisoners, he said.

“The Marcos dictatorship was ended by people power more than 25 years ago but many essential remnants of fascism have remained, buttressed by the continuation of the same old, rotten semi-feudal and semi-colonial system and rule,” Jazmines said.

Karapatan’s Enriquez shares the same view, saying that the Aquino government continues the practice of arrest and detention of those who criticize the government’s inaction on soaring prices of basic commodities, unabated oil price increases, and the government policies and programs on land reform, urban poor housing, mining and budget cuts on basic services such as health and education.

“Beneath the Oplan Bayanihan’s slogan of ‘adherence to human rights and peace and development,’ political repression remains,” Enriquez declared, citing as example the killing of Rabenio Sungit, a member of the United Church of Christ of the Philippines (UCCP) on Sept. 5 in Quezon, Palawan, and the death of seven-year-old Sunshine Jabinez, on Sept. 2, due to indiscriminate firing of members of the 71st Infantry Battalion of the Armed Forces of the Philippines (IBPA).

Presidential Spokesman Lacierda said:” We frown on extralegal killings.” But under the Aquino administration, there are already 55 victims of extrajudicial killings and eight victims of enforced disappearances, based on Karapatan’s documentation.

Cristina Palabay, convenor of End Impunity Alliance, called the Aquino administration “a liar” when it comes to human rights. “Even as the soldiers conduct fun run for peace and offer services to communities, military operations continue. They say they ‘respect’ human rights? Such is the gall of this government,” Palabay said.

Palabay noted that the Aquino administration is seeking to increase the budget of the Department of National Defense by P2.4 billion in the 2012 budget. The amount includes P169 million for intelligence funds and P26.5 million for advertising expenses.

The Office of the President also allots funds for intelligence expenses amounting to P600 million for 2012. The National Intelligence Coordinating Agency will also get a hefty P436 million in 2012.

“How these funds will be spent is a big question because intelligence funds are deemed as confidential expenses. We fear that these funds will be used for surveillance and vilification campaigns of the military against human rights defenders and activists, as they did in the past,” Palabay said in a statement.

“The Aquino administration is not simply ignorant of human rights violations happening. We point to it as the criminal, as it favors Aquino’s class and the foreign powers,” Palabay said.

Coincidentally, Aquino was on a five-day official trip to US during the commemoration of Martial Law in the Philippines.

“In the darkest periods of our history, there was the bloodied hand of the US government. The Marcos dictatorship was supported by the US. Even the Gloria Macapagal-Arroyo administration’s Oplan Bantay Laya was funded and promoted by the US military and US economic aid,” Reyes said.

Reyes described Aquino’s Oplan Bayanihan as “a template of the US Counterinsurgency Guide of 2009.”

“Our struggle for human rights is not isolated from our bigger fight for national liberation from foreign domination,” he said. “Until our institutions are governed by the same class, we can expect that human rights violations will continue and that we cannot achieve genuine justice.”

Karapatan’s Enriquez said the Filipino people should heed the most important lesson of the 14 years of struggle against the Marcos dictatorship, that is, to continue fighting without fear.