VAT on toll fees, a precedent for all public services under PPPs

MANILA – It is bad enough that the Philippine government has been ceding to the private sector the operation of vital public services such as major highways, turning its operation into a business instead of a public service. What is also worrisome even for authors and consultants to the crafting of the VAT law is the scary precedent it is setting. If the VAT on toll fees continues, what would then stop the government’s taxmen in collecting VAT on the operations of other vital services and projects under PPPs (public-private partnerships)?

This in sum is the warning aired by former Rep. Renato Diaz, an accountant who stood as consultant to the lawmakers 17 years ago, when Congress was crafting what Diaz himself described as a “regressive” mode of taxation called VAT (value-added tax). VAT is regressive, he explained, because it does not distinguish between the rich and poor. It similarly taxes everybody who buys or uses a certain product or service, regardless of whether the amount of tax creates a big dent into their pocket, or hardly a dent for those who have thick wads of money.

The warning that more vital public services being turned over now to the private sector could also fall under VAT’s coverage has spooked Bayan Muna Rep. Teddy Casiño, author of House Bill 5303 seeking to exempt toll fees from the VAT. Casiño has promptly suggested to all lawmakers present in the hearing the need to broaden the explicit exemptions to VAT, that is, aside from toll fees.

But members of the House committee on ways and means, citing the “urgency” of passing the “simple” proposal to remove toll fees from the scope of VAT, just as promptly nixed the idea. Rep. Hermilando Mandanas conceded that it is a good idea but another matter that they should tackle in the future, separate from their bill exempting toll fees from VAT.

The toll roads in the country are still public facilities even if the toll operations have been passed on to the private sector, said Casiño and Diaz. The construction, maintenance and operation of these toll roads are still being paid for by the people, through the users’ fees or toll fees. 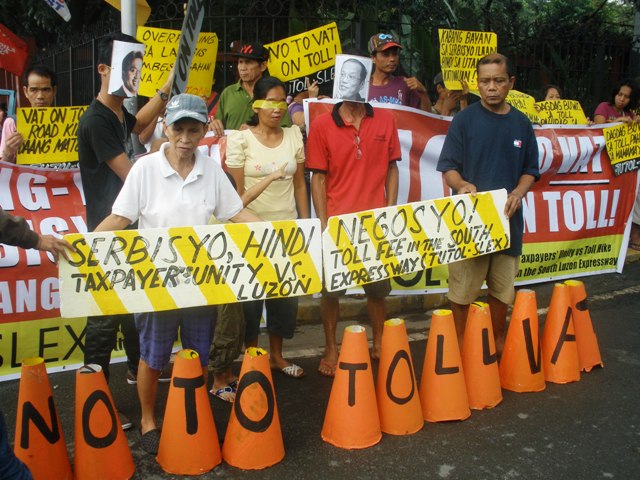 What happened with the SCTEX, said Diaz, is that the government merely gave the private sector the right to collect toll fees and operate toll booths and pay a certain amount to the government so it can pay the loans it incurred in constructing the SCTEX.

Now, all these major highways which remain as public facilities even though “improved” and being operated by private corporations have repeatedly driven the people to protest actions due to its increasingly high toll fees. On top of recouping the cost of improvement and maintenance from the toll fees, the private operators are also raking in profits from toll operations, profits which the government itself guaranteed when they were ‘invited’ to bid for the project and take over.

The peoples’ repeated protests against privatization and its variants such as PPPs in the Philippines or in other countries are rooted in their being opposed to the conversion of public services into profitable enterprises. Often compounding the peoples’ resentment is the knowledge that they have previously contributed or paid for the cost of these public facilities, through toll fees plus various forms of taxes to the government (for example road users’ tax, public transport operators’ franchise fees, etc).

Now, an added burden heating up the people’s fury is the Aquino government’s piling of additional tax into what they already described as “highway robbery” toll fees. In Congress last Tuesday, former Rep. Rene Diaz said this case of taxing again what’s already being taxed through the road users’ tax and toll fees is “really ridiculous.” He opined that the Supreme Court cannot “redefine the meaning of toll.”

In implementing the measure though, “President Aquino has failed the Filipino people,” said Sammy Malunes, spokesman of Taxpayers’ Unity vs Toll Hike in the South Luzon Expressway (TutolSlex). The group held a program in front of the House of Representatives this week to urge lawmakers to immediately pass a law exempting toll fees from VAT. Not only that, the group urged Congress to repeal the “regressive” VAT law itself.