Jurgette Honculada, a member of the GPH panel, said, “For peace talks to go back on track, the CPP-NPA-NDFP should disavow armed struggle.”

In a statement, the National Democratic Front of the Philippines (NDFP) cited as reason the GPH’s failure to comply with its obligations under the Oslo Joint Statements of January and February 2011 to release most, if not all, of the 17 individuals protected under the Joint Agreement on Safety and Immunity Guarantees (Jasig). So far, only four have been released and 13 more NDFP consultants are languishing in jail.

Fidel Agcaoili, NDFP spokesman said the GPH has not released Jasig-protected individuals on or before the October 10 deadline set during the Sept. 6 meeting of both parties in Manila facilitated by the Royal Norwegian Government (RNG). Peace talks should have resumed starting Oct. 31 until Nov. 12.

Agcaoili said the RNG, the third party facilitator in the GPH-NDFP peace negotiations, has expected the GPH to comply with its obligations on or before 10 October to enable the RNG to prepare the next round of formal talks in Oslo.

“Still, the NDFP will patiently wait day by day for the compliance of the GPH to the Jasig and the Oslo statements,” Rafael Baylosis, a member of the NDFP’s reciprocal working committee on socio-economic reforms (RWC-SER), said in a forum organized by the Philippine Ecumenical Peace Platform (PEPP), Oct. 13.

In the same forum, Jurgette Honculada, a member of the GPH panel, confirmed the talks have been stalled.

Jurgette Honculada, a member of the GPH panel and Rafael Baylosis, a consultant of the NDFP, exchange sharp words in a forum organized by the Philippine Ecumenical Peace Platform.(Photos by Ronalyn V. Olea / bulatlat.com)

“Failing verification, how can we ascertain the identities of consultants?” Honculada said. She criticized the NDFP for using encrypted photographs. “They knew there were no photographs. Where is the good faith? What is the basis right now [for the releases]?”

Baylosis said the use of encrypted photographs is an internationally-accepted practice.

Baylosis explained that the Dutch police who raided the NDFP office in Utrecht, the Netherlands and several residences of NDFP members took the diskettes containing the keys. Of the five diskettes taken, only four were returned but all turned out to be corrupted. Nevertheless, Baylosis pointed out that both parties agreed to reconstruct the NDFP list of Jasig-protected individuals.

Honculada said Alexander Padilla, chairman of the GPH panel, never agreed to come up with a new list. Baylosis clarified it would not be a new list but a reconstruction of the old list. 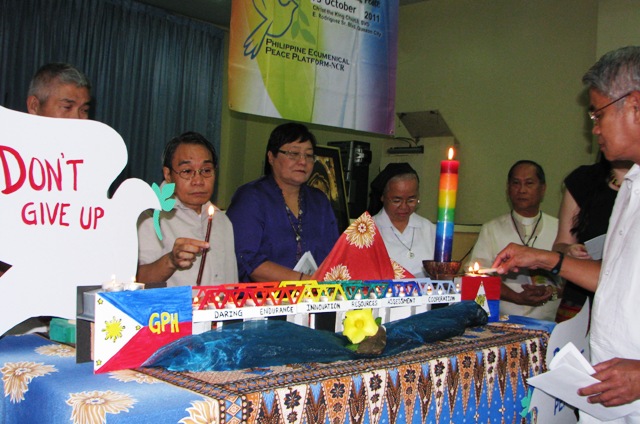 “If the GPH had been liberal in the past, now we have to have certain standards. Without verification, the release [of NDFP consultants] becomes a goodwill measure,” Honculada said. “Yes, it is an obligation if the process worked. True, maybe some of the charges are trumped up murder but it is not easy [to release].”

In reaction, Bishop Reuel Norman Marigza, general secretary of the United Church of Christ in the Philippines (UCCP), said, “We could not hold hostage the peace talks just because verification has failed. We have to provide ways and means so that things could work.”

Who is setting a precondition?

Honculada accused the NDFP of making the release of NDFP consultants as precondition to the peace talks.

Baylosis refuted this, saying that the release of Jasig-protected individuals is an obligation of the GPH.

Then, Honculada said, “For peace talks to go back on track, the CPP-NPA-NDFP should disavow armed struggle,” referring to the Communist Party of the Philippines and the New People’s Army.

Under The Hague Joint Declaration of 1992, both parties agreed that no precondition shall be made to negate the inherent character and purpose of the peace negotiations.

Honculada went on criticizing the recent attacks of the New People’s Army against the three mining companies in Claver, Surigao del Norte. “It is the right reason to protect the environment but a wrong way of using arms,” she said. She added that the CPP-NPA-NDFP should act in good faith and avow the peaceful process of change.

To this, UCCP Bishop Marigza said, “Yes, it may be true that arms is not the best way but civil society organizations and NGOs have been calling for the repeal of the Mining Act of 1995. Nothing has been done. The parliamentary means has actually failed the people on this issue.”

Honculada also claimed there is a disconnect between the NDFP in Utrecht and the ground forces in Mindanao, citing the taking of Lingig Mayor Henry Dano and the four personnel of the Bureau of Jail Management and Penology (BJMP).

“Ka Oris and Ka Parago do not care about the peace process. Is the NDFP in control of the ground forces? Utrecht is talking peace and Mindanao is waging war,” Honculada said.

Baylosis said a civil war is ongoing and that for 42 years, the revolutionary forces have been fighting foreign domination, systemic corruption and state violence.

In his statement, Agcaoili said,”The GPH only wants to talk about peace negotiations but not to really negotiate seriously and to forge agreements on basic social, economic and political reforms. It merely wants pacification and capitulation of the revolutionary movement in compliance with the US-dictated Oplan Bayanihan, a brutal counterrevolutionary campaign masquerading as a peace and development program.”