Hors de combat is a French term meaning “outside the fight.” Under the International Humanitarian Law (IHL) they are protected from any attacks. Hors de combat, whether AFP or NPA fighters, are combatants who have been injured, rendered incapable of engaging in active combat, and are accorded rights to medical care and other rights under international humanitarian law.
According to the veteran women’s rights leader, Delos Reyes should be treated like any other woman who have rights that should be protected and respected regardless of what many may well view as the “radical” path of struggle she chose. 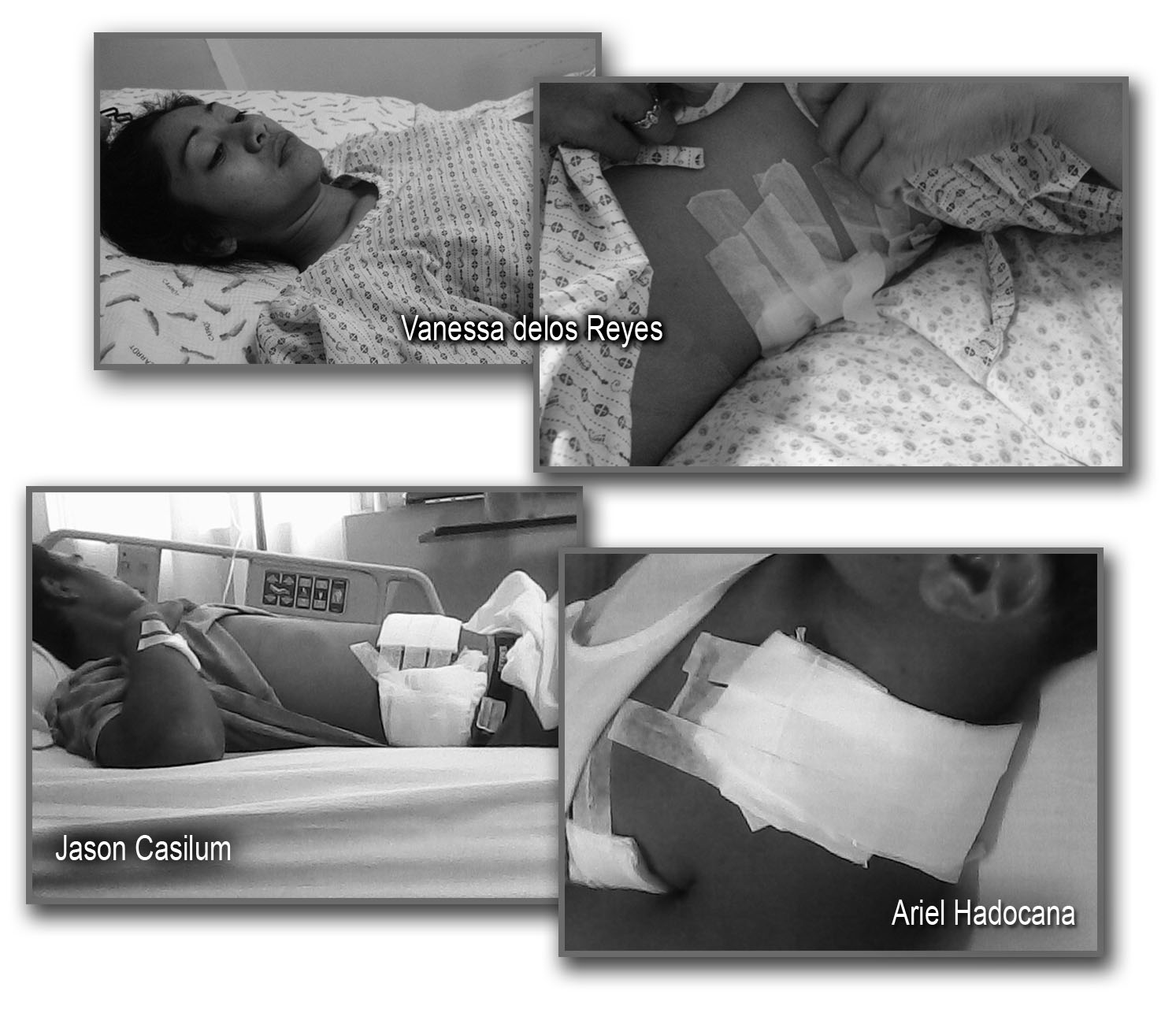 Human rights advocates are calling for the immediate release of three New Peoples Army hors de combat Vanessa Delos Reyes, Ariel Haducana and Jason Casilum. They say that the release of the three who are prisoners of war of the Government of the Philippines (GPH) will be a positive move for the peace talks between the GPH and the National Democratic Front of the Philippines (NDFP). (Photo courtesy of Exodus for Justice and Peace / Bulatlat.com)

“Gabriela fully supports the call for Vanessa’s immediate release. We also reiterate the urgent need for a general, omnibus and unconditional release of the rest of the 350 political detainees in the country, all of whom are incarcerated for practicing and exercising their political beliefs,” Ilagan said.

On May 29, 2011, a unit of the Conrado Heredia Command-Guerrilla Front 20 Operations Command, under the Merardo Arce Command of the NPA in in Southern Mindanao, engaged and resisted a platoon of the 2nd Scout Ranger Battalion-First Scout Ranger Regiment (FSRR) as the latter attacked an NPA tactical position in Sitio Karampil, Barangay Aliwagwag, Cateel, Davao Oriental.

The FSRR — considered an elite unit of the Philippine Army — reportedly suffered 11 casualties, eight being killed while the rest were wounded. In the meantime, two members of the NPA were killed and four others were reportedly wounded.

After receiving first aid from the NPA medical personnel, the three critically-wounded NPA members, Delos Reyes among them, were transported to medical facilities.The three were airlifted from Bislig, Surigao del Sur, but the two other NPAs Ariel Haducana and Jason Casilum were taken to Davao City, while DelosReyes was taken to the SPFM. The last wounded NPA member remained with the NPA in its guerilla base because his injury reportedly required no special medical facility, and the medical care given by NPA combat medics was already sufficient.

Delos Reyes, Haducana and Casilum are now considered by the Philippine Army’s 10th Infantry Division as its de facto prisoners of war (POW).

Based on reports, the emergency process was carried out via civilian channels under the auspices of Davao City Vice Mayor Rodrigo Duterte. Duterte sad the medical evacuation is a positive gesture to reciprocate the humanitarian actions previously undertaken by the Medarde Arce Command, particularly the release of the NPA prisoners of war in the region.

“Vanessa has manifested sheer courage in living out her political beliefs. Some may not agree with the path she took, but the fact remains that she is proof of how women and the youth are desirous of real political change, and that they play a role in the over-all struggle for genuine change and democracy,” said Ilagan.

Meanwhile, Fe Salino, an ex-detainee and leader of the group Samahan ng mga Ex-Detainees Laban sa Detensyon at Aresto (SELDA), announced the creation of the Free Vaness Delos Reyes! Free All Political Prisoners Movement. She said there are 24 other political detainees in Southern Mindanao, and most of them are facing trumped up charges.

“Political detainees like Vanessa are now victims of the Ilagan Doctine — a legal principle established by jurisprudence which states that a writ of habeas corpus is no longer available after criminal information is filed against the person detained and an arrest warrant or a commitment order is issued by the court where the said information has been filed. Under the Ilagan Doctrine, the unlawfulness of an arrest becomes moot and academic or an illegal arrest becomes “legal” once charges are filed in a court of law,” she said.

“Our call is ever more important, now that we are tracking peace talks,” convenor of the group Bishop Modesto Villasanta said. “The release of the three will definitely aid in confidence building for both the government and the NDF in pursuing peace talks,” he said. “Instead of using peace rhetoric for military operations and insisting that the NPA is a local terrorist, the military must heed the call to support peace negotiations by observing and respecting signed agreements between the government and the National Democratic Front of the Philippines (NDFP).”

Villanta appealed to the Government of the Republic of the Philippines (GPH) to observe international conventions such as the Geneva Conventions that provide rules on war and international humanitarian law.the Geneva Conventions for the Amelioration of the Condition of the Wounded and the Sick in the Armed Forces in the Field, and Additional Protocol relating to the Protection of Victims of Non-International Conflicts as well as the GRP (now GPH)-NDFP Comprehensive Agreement on Respect for Human Rights and International Humanitarian Law in the conduct of their military actions.

“These agreements provide what is prohibited – such as the use of public places, including schools and barangay gyms, for military operations and provide mechanisms on how to protect persons no longer taking direct part in armed hostilities, for example, relatives, hors de combat and medical professionals among others,” he said.

Based on IHL provisions, the AFP cannot and should not engage in any act of reprisal against the three NPA hors de combat who, owing to their medical condition, no longer take active part in hostilities. Any move taken by the 10th ID and the AFP that would be inimical to the rights and condition of the NPA wounded personnel, their families and other civilian entities would constitute a serious breach of IHL and the CARHRIHL.

For his part, group convenor Bishop Delfin Callao made the observation that the AFP continues to ignore the fact that the GPH is involved in peace negotiations with the NDFP. He said the military continues to tag NPAs as terrorists and file criminal cases against them. “Clearly, this does not help the peace talks, ”he said.

The bishops said that they have in previous times also appealed to the NPA, appealing to them to release it own POWs on humanitarian grounds. They said that in response, the NPA released captured AFP soldiers and officers, allowing them to reunite with their anguished wives and families.
Exodus for Justice and Peace has already submitted an an appeal to Lt. Gen. Arthur Tabaquero, chief of the Eastern Mindanao Command and Major General Jorge Segovia, commander of the 10th Infantry Division of the AFP to release the three NPA hors de combat. They also commended Davao City Vice Mayor Duterte for transporting the three NPA hors de combat, allowing them immediate access to life-saving medical treatment.

“We believe that reciprocity is incumbent upon both protagonists in the civil war. As the NPA has released prisoners of war in the past, the time now calls on the AFP to reciprocate with its own humanitarian gestures. If heeded by the AFP, this will be a significant step to humanize the dire impact of civil war on human lives and, more importantly, to bring forth confidence in the peace talks between the GPH and the NDFP,” they said.

The bishops, however, warned against the filing of criminal charges and not rebellion charges against the NPA hors de combat to justify their continuing detention.

“While this has made their hospital arrest arguably legal or illegal, ours is a humanitarian appeal for their immediate release to their families,” they said.