Labor Undersecretary Lourdes Transmonte said the DOLE cannot file a case against Keppel even if its investigation showed that it is liable for the accident.

MANILA – There had been the usual “toolbox meeting” in Keppel Subic Shipyard on the morning of Oct 7, before some 230 workers proceeded to continue work on the repair and anti-pirate retrofitting of a 22,650-ton cargo container ship called MV Tombarra.

It is just one ship to work on, and Keppel Subic Shipyard has on average a 1,300 Filipino workforce, according to Keppel Subic Shipyard president Mok Kim Whang. More than two-thirds of these workers are contractual, based on the presentation of the Department of Labor and Employment (DOLE).

There had also been a health and safety inspection of Keppel Subic Shipyard last August, according to PEZA in Subic. The findings had been okay, it said.

Keppel and Hanjin are two of the big-ticket shipbuilding and repair investors that took over the facilities in Subic, Zambales after these were converted from being US military bases before. It involved billion-dollar investments and employs thousands of workers. But it has also repeatedly featured in accidents that resulted in deaths and injuries to its workers. 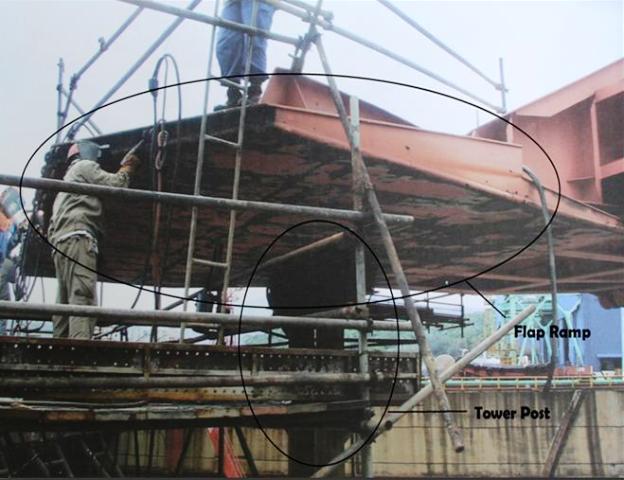 From the investigations of the Metal Workers’ Alliance of the Philippines (MWAP), Institute for Occupational Health and Safety (IOHSAD), Center for Trade Union and Human Rights (CTUHR) and Ecumenical Institute for Labor Education and Research (EILER), here is what happened on Oct 7:

– The said ramp was held in place by steel cables more than an inch in diameter and tied to a part of the ship, which was dry-docked while being repaired; the ramp is several stories high from the ground where other workers were busy. On the other end of the ramp, only one steel post was supporting it.

– The steel cables supporting the ramp from one end snapped, resulting in what sounded like an explosion. But the single steel post supporting the ramp on the other end failed to support the whole weight of the ramp being repaired and retrofitted with anti-pirate plate. 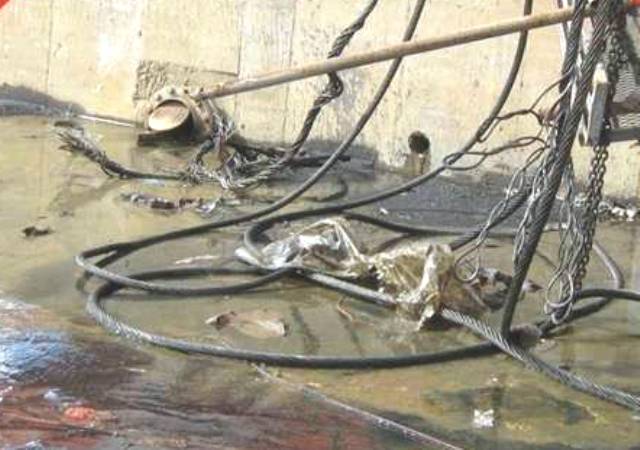 Sample of frayed steel cables that brought about the fall of tons of steel tower post and ramp. (Photo courtesy of DOLE / bulatlat.com)

– Unbalanced, the steel post teetered and fell, bringing the ramp down with it, and an anti-pirate plate to be fitted on it.

(The Zambales police reported that a “crane” used to carry the anti-pirate plate fell on the cables, causing it to snap. But Fernando San Juan, witness and father of Mark San Juan who died during the accident said the “crane” was not yet near the ramp area when the cables snapped. The police attributed their “error” to the lack of engineering experts among them and to the fact that many things at the site had been shifted around and “tampered with” before they arrived. Senator Estrada told the police to interview the witnesses.)

– The hydraulic jack that should have averted or slowed down the plunge of the ramp did not function or was absent at the work area, hence the lack of time for workers to evade the falling ramp, steel post or other heavy materials on it.

Three vulnerabilities in the work area at the MV Tombarra were seen by the workers-led fact-finding mission: (1) the steel cables supporting the ramp turned out to be lacking in needed strength to support the weight of the ramp; (2) the steel posts supporting the ramp used to be four (4), not just one (1), according to the workers; and (3) the lack of a working hydraulic jack at the work area.

The DOLE investigators pointed to the rush to meet the deadline as likely explanation for Keppel’s failure to put adequate safety measures.

“You also cannot discount the possibility that there was negligence on their part (Keppel) regarding safety measures that should have been in place,” said Sen. Jinggoy Estrada in mixed English and Filipino. 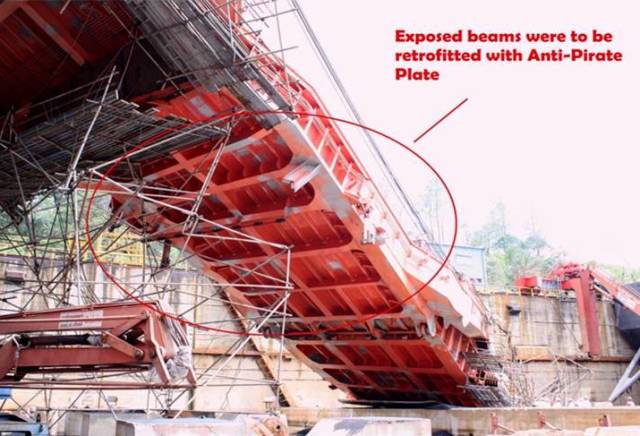 The workers’ fact-finding mission, and the Subic Mayor, too, reported that there is no round-the-clock doctor in the work area despite the shipyard work being classified as dangerous.

Keppel’s Whang also clarified that the subcontractors “pay for their safety equipment. I didn’t say I pay, I say that we ensure that they observe safety practices and procedures.”

In fact, it is the workers, particularly the contractual workers, who pay for the cost of their helmets, protective eyeglasses and belts, an officer of MWAP told bulatlat.com. These, unfortunately, could still prove useless. “What can helmets do against tons of ramp and steel post collapsing on you?” Senator Estrada asked.

Toward the end of Monday’s hearing at the Senate, there was still no mention of sanctions against Keppel even amid the findings of at least three different investigating teams that Keppel has been negligent on their workers’ health and safety. 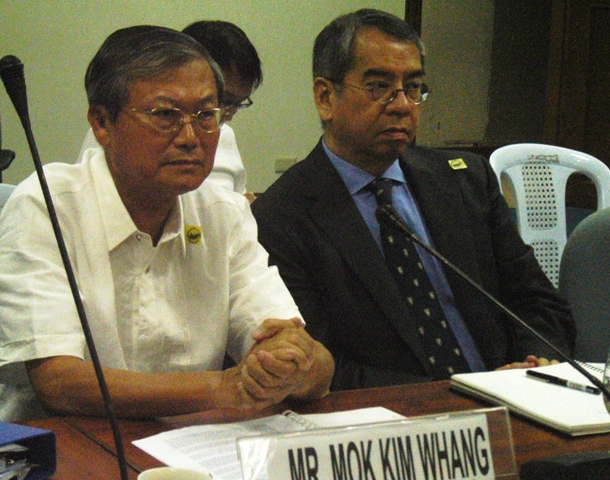 Keppel’s Whang apologized for what happened, saying nobody wants it to happen but it has happened. He reminded the Senate labor committee of the billions of dollars they invest in the Philippines and the thousands of Filipinos they employ. He said that soon, they will also offer packages to the victims that are above the amounts stipulated by law, on top of paying for the cost of hospitalization and burial.

But the workers’ fact-finding mission revealed that for one of the victims at least, Keppel has offered only P10,000 ($230) as “compensation.”

Labor Undersecretary Transmonte said the DOLE cannot file a case against Keppel even if its investigation showed that it is liable for the accident. “DOLE can only be a witness,” she said. That is, assuming the workers file claims.

Asked if the spate of accidents in workplaces could prompt the DOLE to scrap its DO 57-04 allowing companies to assess its own health and safety compliance, Transmonte said, “We will have to revisit that.” She explained that past self-assessment of Keppel has been “okay.”