You Are Here: Home → 2011 → October → 26 → From Quezon to Misamis Oriental, women coconut farmers struggle to make both ends meet

“Our income as coconut farmers is only enough to cover our expenses for a few days. To survive on the other days, we eat bananas and sweet potatoes.”

CAGAYAN DE ORO, Misamis Oriental — Mylene Santowa, 31, and Dioselyn Marianas, 51, are hundreds of kilometers away from one another. They have not met in person but as coconut farmers, both share the same problems that are rooted in landlessness and poverty.

Since 2007, Santowa has never missed a peasant caravan, a nationally coordinated activity organized by peasant groups every October. These gatherings, where she gets to meet other peasants who are struggling for genuine agrarian reform, inspire her, knowing that she is not alone.

Santowa, who earns primarily from harvesting copra, said she inherited this livelihood from her parents. The land that they have been tilling in San Francisco, Quezon was awarded to their family only in 2007 under the condition that they would pay $11 per month for 30 years.

“But with an income of only roughly $46 every harvest season or at least every two months, we could not afford to pay the monthly amortization,” she told Bulatlat.com in Filipino, “We could not even have a decent meal.”

When asked how she manages to make both ends meet, she replied, “I also do not know how we have been surviving.” Her husband Mileton was forced to leave their hometown to work as a cook in a small eatery in Sampaloc, Manila. While her husband earns $70 a month as a cook, “he still have living expenses in Manila. We are lucky if he could bring home at least half of what he earns.”

Marianas, on the other hand, who live hundreds of kilometers away from the province of Quezon, said she also could not imagine how their family manages to survive day after day. They harvest copra from the nine hectares of land that a well-off Mercado family owns in Ginoog, Misamis Oriental. Every harvest or every three months, Marianas said they earn only about $14.

“It is only enough to cover our expenses for a few days. To survive on the other days, we eat bananas and sweet potatoes,” Marianas said, adding that they also sell cassava on the side for only $0.51 per kilo.

Their conditions, said Marianas, have worsened over the years because of unwritten policies and practices. They have brought these issues before the local government but it has not acted on their concerns.

In Misamis Oriental, Amihan Northern Mindanao, a women peasant organization, said 103,258 out of the 161,599 hectares of agricultural land are allotted for the coconut industry as of 2010. But the scale of the industry in the region did not reflect that of the livelihood of the people working on the ground.

Tersya, for one, is how landowners and coconut farmers divide their earnings, where only one third of the produce goes to coconut farmers such as Marianas. Administrative Order No. 5, series of 1993 of the Department of Agrarian Reform provides that the amount of land rent should not exceed 25 percent of the overall income of the farmers. 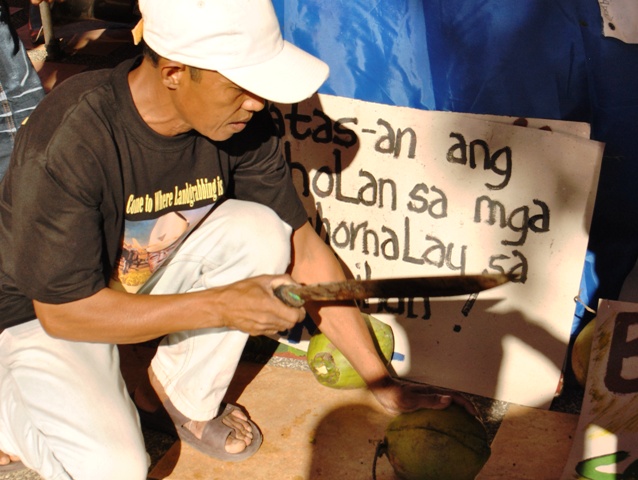 Marianas said their earning, despite the implementation of tersya, remain insufficient to support their daily needs. But, she added, it augments their meager income. She added that the local government should also investigate the cutting of coconut trees for coco lumber in their municipality.

As for Santowa, she added that there are people in their town who serve as “middle men” who buy their produce and bring it to Manila. They take 15 percent off their earnings for every 100 kilos. But, she added, aside from this, it is the deceit of the coco levy that she feels all the more oppressed.

The collected levy, in almost 10 years of its implementation, was valued at $222.89 million. As of 1999 it is estimated to be worth $2.23 billion. The coco levy is supposed to be used to subsidize domestic consumption of coconut-based products. But it only made the prices of fats and oils, which are derived from coconut, higher. Worse, the funds were directly managed by Marcos’s cronies Eduardo Cojuanco, former defense minister now Sen. Juan Ponce Enrile and Ma. Clara Lobregat through the Philippine Coconut Authority, the Philippine Coconut Planters Federation and the United Coconut Planters Bank. The three major institutions were established in 1975 through the coco levy funds invested in the Coconut Consumers Stabilization Fund.

When the Marcos dictatoship was toppled by a People Power uprising in 1986, the Presidential Commission on Good Government sequestered the SMC shares, which Cojuanco bought in 1983 using the coco levy funds under the UCPB. Graft cases were filed against Cojuangco and the Marcoses before the Sandiganbayan and the Supreme Court in 1987 on the basis of the misuse of the coco levy funds. House Bill 25928 was proposed in 1989 to declare coco levy funds as public funds. No further measures, however, was taken beyond the committee level.

Also in 1989, the Supreme Court ruled that the “coco levy funds are clearly affected with public interest. But in its 2011 decision, the Supreme Court said the PCGG failed to prove that SMC shares were purchased from ill-gotten money, thus dismissing a petition seeking a reversal of a Sandigan ruling, which also declared that Cojuanco did not use the coco levy funds in procuring the SMC’s 20 percent share.

The 74-page en-bank decision, which unfortunately served as the legal closure of the almost two decades of legal battle, declared Cojuanco, uncle of President Benigno s. Aquino III, as the registered owner of the SMC shares.

As in the past, Santowa said she joined this year’s peasant march to make sure that the calls of the coconut farmers would be heard by the government. “President Aquino should listen to our call for genuine agrarian reform.”

Peasant organizations have earlier criticized Aquino’s deafening silence right after the Supreme Court decision. Anakpawis Rep. Rafael Mariano said, “Before, Danding and the Aquinos had estranged personal and political relationships. Now, they’re all engaging in economic concessions and political accommodation. Is this a result of a long-hatched sweetheart deal or a Supreme Court-brokered deal?” he asked.

Wilfredo Marbella, KMP’s secretary-general, said since the Supreme Court’s ruling is now a part of Philippine jurisprudence, it would be “used, copied and adapted in the drafting and promulgation of decisions that will go against the welfare of farmers all over the country.”

“I voted for you (Aquino) because I believed that you were different from other politicians and your landed family. But I was wrong. You failed to bring justice to coconut farmers like me,” Santowa said, adding that the future of the coco levy and the implementation of genuine agrarian reform remains dim under Aquino because both go against the interest of his family business.

Santowa said the time is ripe for the Philippine government to return the money that was stolen from coconut farmers.

“Some say we could only hope and pray that ‘change’ would soon come in the Philippines,” Santowa said, “But I believe that the welfare of coconut farmers could only improve if we will unite and show the strength of peasants to bring about the change that would truly benefit majority of the Filipino people.”