Another victim killed in Arakan Valley

According to the initial report, before his killing, Ramon Batoy was being accused by soldiers of being a member of the New People’s Army. Batoy is an active supporter of Bantay Katubigan and Bantay Kalikasan of Mt. Sinaka facilitated by the Municipal Agriculture Office of Arakan. He was also a tenant-farmer of the Mayor of Antipas. 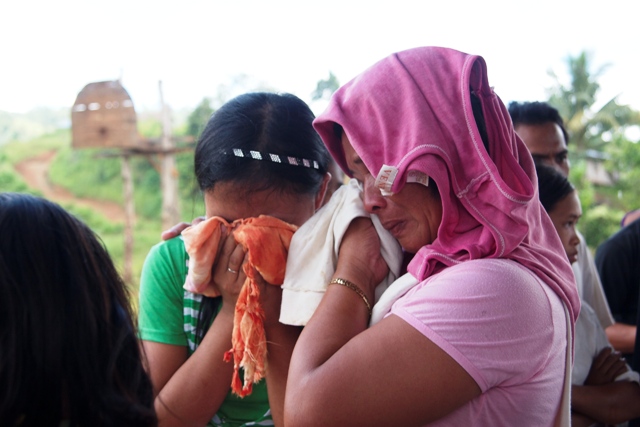 The family of Ramon Batoy weeps in rage after he was shot dead by soldiers outside his house in Sitio Upper Lumbo, Barangay Kabalantian, Arakan, North Cotabato. (Photo by Karlos Manlupig / Bulatlat.com)

According to the urgent action alert sent to Bulatlat.com, three soldiers from the 57th IB forcibly entered Batoy’s house. When Batoy resisted, he was hit with rifle butt. Batoy defended himself against the soldiers and struck the soldier with his bolo. Three soldiers nearby, one of whom was covering his face with a mask, riddled Batoy with bullets. A witness saw that one soldier strapped a rifle on Batoy and took pictures of his dead body.

Batoy’s house and seven other houses nearby were then fired upon by the soldiers. Batoy’s brother, Roger, 44, suffered minor wounds on his left foot. He was inside his house with his wife and stepmother. His wife, Janeth noticed bullets passed over her head during the firing.

On the same day, according to human rights groups Karapatan, Noli Badol, 35, farmer and a leader of Sitio Upper Lumbo, Brgy. Kabalantian, Arakan was also mauled by soldiers from 57th IB. “Badol’s legs and hands were tied. Soldiers also fired at his wife Evelyn, 32, who is eight months pregnant, and their children when she attempted to go near Badol. The military took Badol and detained him at the detachment of the 57th Infantry Battalion for several hours,” Karapatan said in a statement.

Celso Batoy, elder brother of Batoy, 47, was also mauled and detained by the soldiers. Both Celso and Badol are both currently detained at the police station of Ammas Municipality in North Cotabato for charges of illegal possession of firearms and explosives.

These incidents resulted to the evacuation of 136 families. Some 43 families from Sitio Lumbo evacuated to Binoongan Elementary School for fear of more attacks from the military. 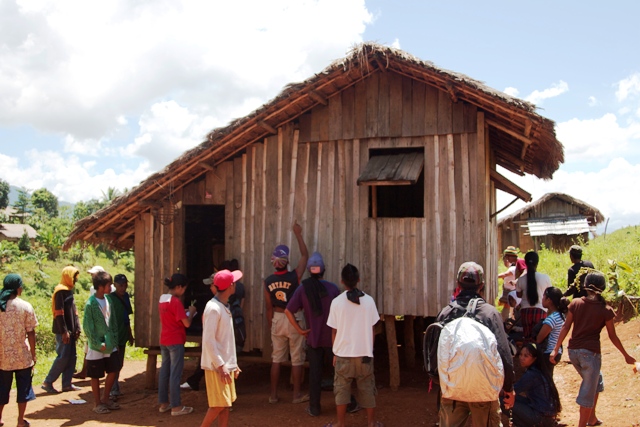 A farmer points at the bullet holes on the house of Ramon Batoy who was killed in Sitio Upper Lumbo, Barangay Kabalantian, Arakan, North Cotabato. (Photo by Karlos Manlupig / Bulatlat.com)

The following day, Oct. 21, another 93 families evacuated to the same school.

“What kind of ‘peace and development’ is going on in the communities in Arakan? The military’s ‘peace and development’ activities actually means the fake surrender of civilians being forced to admit to being members of the NPA; the mauling, strafing, harassment, threat, intimidation and killings of civilian. We are now seeing the true face of Oplan Bayanihan, the current administration’s counter-insurgency program, where scores of human rights violations take place amid the presence of the so-called Peace and Development Teams (PDTs),” Karapatan Southern Mindanao said in a statement. 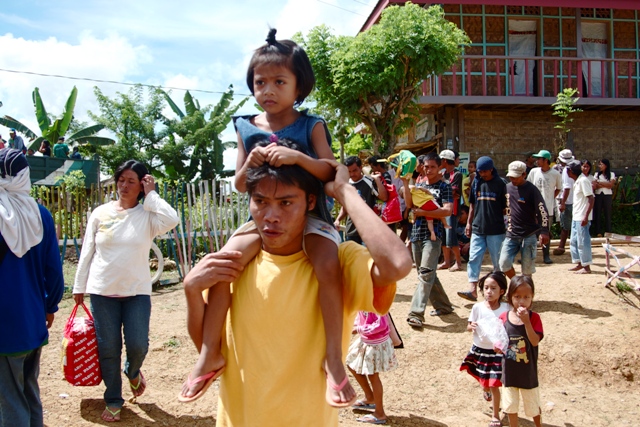 Around 48 families evacuated from Sitio Upper Lumbo, Barangay Kabalantian, Arakan, North Cotabato as tension escalated that left one dead and two injured, wherein one is a government troop. (Photo by Karlos Manlupig / Bulatlat.com)

Lt. Col. Joven Gonzales, commander of the 57th Infantry Battalion immediately announced to the media that an encounter took place in Arakan town around 5:45 a.m. while the soldiers were conducting “a clearing operation.” He told the media that the operation was “legitimate” and that Ramon Batoy, Noli Badol and Celso Batoy were NPA members.

Isabel Santiago, spokeswoman of the Alfonso Command (Front 53) in Mindanao belied the military’s claim saying that there no encounter occurred.

“The Herminio Alfonso Command, Front 53 Operations, likewise scoffed at the lies perpetrated by the AFP. Col. Joven Gonzales said the raid conducted by the 5th Special Forces Company was in response to a tip that there were land mines in the area,”] while 602nd Brigade Commander Col. Cesar Sedillo and AFP Eastern Mindanao Command spokesperson Col. Leopoldo Galon, Jr, claimed that there was a legitimate encounter with Red Fighters in the area. No such encounter occurred.”

“The murders and atrocities in Arakan, North Cotabato has showed that the fascists have no compunction in unleashing their brutality against the people using the deceptive ‘soft approach’ trickery. The toiling masses can only turn to the people’s democratic revolution for genuine justice,” Santiago said.

Karapatan Southern Mindanao said the military’s 10th Infantry Division, Eastern Mindanao Command and the Aquino government, because of its Oplan Bayanihan, shares the blood of these victims on their hands. “This is the face of Peace and Development Outreach Program. Their peace is silencing the people’s dissent. Their peace means death to leaders of farmers, church people, and civilians.”