MANILA – The agricultural towns of Isabela hit the headlines last month when typhoons Pedring and Quiel and the dams in Luzon combined to inundate and damage the province’s nearly ripe crops. But according to the farmers here, even before Pedring and Quil, they have been grappling with other ongoing disasters, only these are more man-made.

Based on cases shared by Diony Yadao, 49, chairman of Danggayan ti Manalon ti Isabela Bagani (United Farmers of Isabela) and Isabelo Adviento, 46, member of Kagimungan sa Cagayan (Peasant Alliance in Cagayan), the peasants in their provinces are complaining about how their local government leaders, the DAR people and even the Land Bank of the Philippines feature in various schemes that ultimately deprive the farmer-tillers of their rights to their lands.

In the town of Cordon, Isabela, for example, a certain Roque Estate reportedly turned up in 2002 and with the help of the local government, started to lay claim to at least 400-hectares of land already being tilled by many families. “The Roque Estate claimed that those lands belong to them, but the farmers maintain that their ancestors had been there for as long as they can remember,” Yadao told Bulatlat.com. 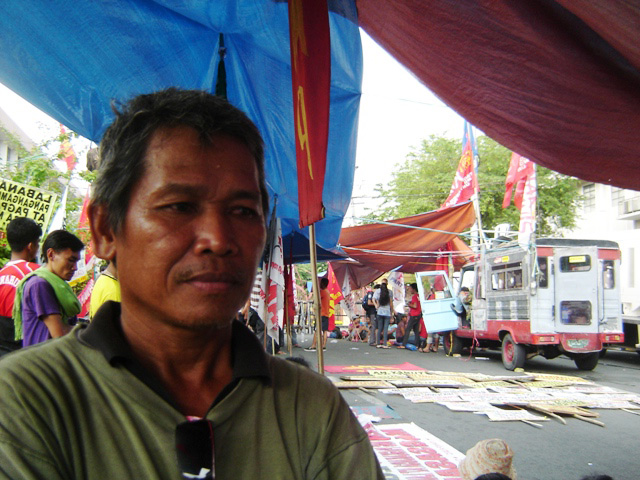 For a year, the Roque Estate was also able to cause the imprisonment of 11 farmers it accused of arson, said Yadao. The Roque Estate blamed a summer bush fire on the farmers living near a farm of the Roque Estate. He added that they were able to secure the farmers’ release with the help of a priest and the peasant organizations. The case against the farmers was dismissed.

“Last month, government troops also arrived in the area armed with long firearms, firing at nowhere in particular, scaring off the farmers and the peasant leaders of Cagayan,” said Yadao. Some of these farmers the soldiers recruited for “work,” which is largely informing on the activities of the Kilusang Magbubukid ng Pilipinas (KMP), the Kagimungan (local peasant alliance) and the Anakpawis Partylist. “The farmers whom they failed to recruit they threaten and watch closely,” added Yadao.

In other villages in Isabela, a “fixer” reportedly works to acquire lands through various scams. In San Mariano, Isabela, the said “fixer” approaches peasants who still have no land titles; she offers to help them with securing a land title. But when the Certificate of Land Ownership arrives, it is frequently named for someone else, said Yadao, transforming the tiller to just a tenant of the land that should have been his or hers already.

After one harvest season, Yadao said the Land Bank would send the tenant a notice to pay for the land they are tilling, because it is titled to someone else.

Even in instances when the farmers already have a land title, the DAR and the fixer reportedly manufacture fake land titles and then sell it to the Land Bank of the Philippines. The fixer, according to the peasant leaders, is Nenita Perez, and she is being helped in her titling activities by a certain Engineer Galvez. Armed with a fake title, these two would reportedly tell Land Bank that farmer so and so is handing out a VOS (voluntary offer to sell) of his or her land. The said land is then sold to others, without the knowledge of the actual or rightful tiller.

As much as 6,000-hectares in San Mariano alone of Isabela have been estimated to be covered by this scheme, said Yadao, adding that they have already gathered evidences.

Unfortunately, he said, the same scam is also happening in other towns of Isabela such as in Echague, Jones and Cauayan.
The racket seemed to have started in 2001, Yadao said. But it was only in 2005 when they started getting documentary evidences.

Today, the farmers whose lands became subject to VOS and titled under another owner are still planting rice or corn on the same lands. “But the others have pawned their land to Ecofuel Development Corporation,” said Yadao.

The peasant leaders said the farmers in the area are now living in fear of being driven out of their lands, if they fail to pay the Land Bank their amortizations. Given the destruction wrought by the recent typhoons and dam water releases, the payments may be harder for them to make, the peasants said.

What is especially painful in these land scams, said Yadao, is the fact that many of the victims are also farmers who had gained titles to their lands through religious payments of amortizations in the Land Bank. With the ongoing scam, though, they have not only lost their titles to the said lands, they also have to start paying for it once more.

Yadao said that in some instances, the scam had also involved the DAR people convincing the farmers to hand over their copies of CLOAS for “correction.” But the farmers reported that the DAR officials did not return their copies. Worse, they learned later that their lands had been retitled to someone else. Some of them, Yadao explained, have finished paying the amortizations to their land – but they did not get a certificate stating that. “Some continue to pay up to now, even if they have finished paying the previously stated amortization,” said Yadao.

In some instances,the peasant leaders said, some farmers have been driven out of their lands already, and they are now just earning a living as lower-waged farm-workers for biofuels, for example. Some farmers found out that their lands have already been pawned by its title-owners to the Ecofuel Development Corporation; the title-owners reasoned they only did that because the tillers are not paying them for the use of “their” lands.

As such, the peasant leaders concluded that the massive ongoing land scam in Isabela is not only defrauding the farmers here, it is also serving the interest of the biofuels operators to expand the lands under its control for biofuels, to the detriment of the long-time farmers-tillers who had paid for the lands already, and food production in Isabela.