“We lost our land, our livelihood and possibly our source of water because of them,” Consolacion Payla, 66 years old and resident of Opol, Misamis Oriental

“I am angry because the company that manages the palm oil plantation has not been true to its words. We lost our land, our livelihood and possibly our source of water because of them,” Consolacion Payla, 66, said in the vernacular. Payla is one of the Lumads struggling against the palm oil plantation in Sitio Limbasan in Opol, Misamis Oriental.

Nakeen Corporation, a wholly owned subsidiary of A Brown Energy and Resources Development, Inc., was able to secure a permit from the government to cultivate over 600 hectares of public land located in Opol, Misamis Oriental, with corresponding tax perks for the proposed P174.4-million ($4.05 million) project. The exploration phase began late in 2010. 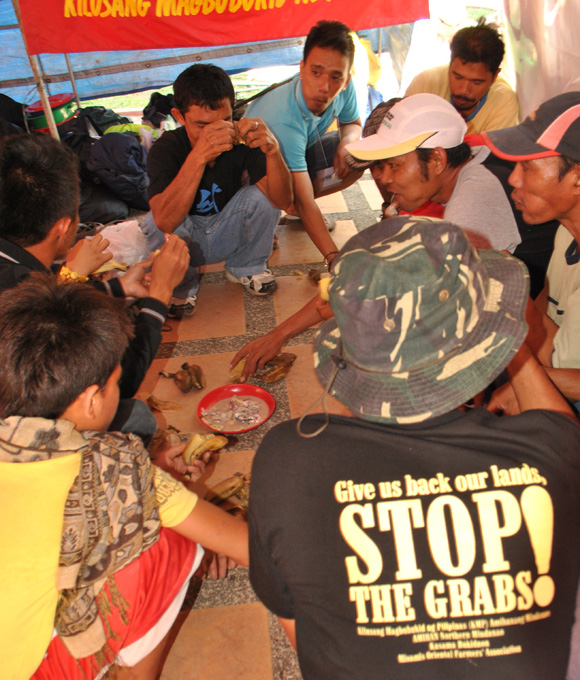 Trade secretary and Board of Investments chairman Gregory Domingo said that with the strong demand for palm oil both in the domestic and international market, “production can only get better with growing more palm trees in the country side.”

Palm trees grow up to 30 feet tall and have a life span of 25 years. It bears fresh fruit bunches, small reddish fruits, which are made up of oily pulps. Its seeds, called palm kernel, are also rich in oil. The palm oil plantation in Opol, Misamis Oriental has a capacity of over 13,000 metric tons of fresh fruit bunches a year and would require some 209 personnel.

A Brown started planting palm trees on January 2011 and the commercial operation, meaning harvesting of the fruits, is slated to begin sometime in January 2014. Yet, as early as now, Payla said, the company has already affected their lives. The community of Lumads fear that their source of potable water, which is a nearby river, would be polluted with the harmful chemicals sprayed on the palm trees.

“Now we have to get water from the town proper, “We walk far just to get drinking water,” Payla said. She added that they are also observing the cows that are drinking from the river in their community.

But aside from the water, the Lumads are also deprived of their land and livelihood. Payla now only has not more than one hectare of land from the six hectares she and her family used to till. The land, she said, was originally a part of their ancestral domain until a certain Captain Carrey arrived in their community in 1951 and claimed their lands.

“He is from Luzon,” Payla said when asked about further details on who Captain Carrey is.

Carrey turned their rice fields into a livestock farm. Her husband worked for Carrey and when the latter eventually left a few years later, some parts of the land, which they call as Carrey’s pasture was left to the Payla family to fend.

But with the entry of A Brown most, if not all, of it were taken away from their family and the rest of the community. Included in the five hectares of land they lost to the A Brown are 580 banana trees, 64 coconut trees, four jackfruit trees and one mango tree. “We were here even before you came. How come they can simply take our livelihood away?”

Payla said their produce now could only suffice for their daily needs. To make both ends meet, they sell wood and earn roughly $0.11 for every 100 bundles of wood. Unfortunately, it is only enough to buy salt and dried fish for at least once a month.

Those who challenge the palm oil plantation are being harassed. In a statement, Pangalasag, which literally means indigenous shield, informed Kalumbay Regional Lumad Organization that on September 24, 2011 that their leaders and members are being harassed and intimidated.

Officers of their organization have been put under surveillance, have reportedly been harassed through text messages, and were maltreated by company guards. “The company’s systematic violation of their rights has been left unnoticed because of the remoteness of the community, and the low literacy level of the victims to seek redress in courts,” the statement read.

At around 11:00 a.m. last March 10, 2011, Pangalasag members namely Edwin Baranggot, Jemar Armilla, Fausto Magpulong, Raul Magpulong, Jose Paborada, Dante Paborada and Ruel Tagupa were on their way to gather bagacay, a variety of bamboo, but did not proceed because they were apprehended by an armed group while they were resting after a long walk.

“They opened fired on us and we ran for our lives,” Armilla told Bulatlat.com in an interview. He said he was soon left behind and hid under a bush but was unfortunately found by a man who introduced himself as a member of the National Bureau of Investigation.

“Let us just kill him. He will just rot, nobody would look for him,” Armilla said, quoting one of the members of the armed group.

Barangot, on the other hand, surrendered upon seeing a man pointing a gun at Armilla. He was handcuffed and was hit on his leg. Both Barangot and Armilla were brought to the Opol Police Station where they were detained for two hours. One of the NBI agents also punched Armilla on his chest three times. The two were eventually transferred to the NBI office at the Provincial Capitol Grounds in Cagayan de Oro City, where they were detained for a night. They were charged by the NBI of direct assault.

Both Barangot and Armilla were released after posting bail, amounting to $311 for the two of them.

They learned later on that the A Brown called the NBI and the police because of some “armed men” roaming the plantation. Armilla said obviously they were not the “armed men” that A Brown was referring to. He told Bulatlat.com that he is only a farm worker in a nearby coconut plantation, earning only roughly $2.7 a day.

Kalumbay chairman Jomorito Goaynon said that in most cases, giant companies behind these plantations are almost always allowed by the local government to cultivate the land even if the locals, in this case, indigenous peoples, do not allow it.

To force the people into allowing the plantations to enter their community, Goaynon said, companies would hire village officials to convince the residents. Aside from the two peasants who were jailed in March, he said, their organization has documented at least five families who were harassed by either the company guards or village officials since A Brown began their exploration stage late in 2010.

Goaynon said harmful chemicals being sprayed on the palm trees could severely damage other crops such as coconut, corn and rice. The worst, he said, is when it would finally pollute the source of potable water of the community.

While there are still no military units deployed in the area, Goaynon said, they are expecting that this would soon happen. The incident, where Armilla and Barangot were taken at gunpoint and charged in court, is a sign that more human rights violations have yet to come.

“We do not believe that there is an armed group, nor the NPA,” referring to the communist New People’s Army,” in the area. All of these are mere tactics to silence the community because of their struggle against the palm oil plantation,” Goaynon told Bulatlat.com in an interview.

Goaynon said it is now in the hands of the national government to revoke the permit it gave to A Brown. “The palm oil plantation would not be of help to the country’s economy because the produce would not be for local consumption,” he said, “We will file our formal complaint before respective government offices to put a stop to the plantation.”

Payla, for her part, said she will join the struggle against the palm oil plantation. “We are not afraid because I know that we own the land that we are tilling.”