You Are Here: Home → 2011 → December → 4 → Church, urban poor call on government to prioritize concerns of the poor

Church, urban poor call on government to prioritize concerns of the poor

“What will ‘development’ be when people are blinded by the glare of the arrogant lights of profit and the mantra of globalization and millions are pushed into further misery?”

MANILA — As the church calendar enters the season of Advent, church workers vow to push for better and just living conditions for poor dwellers not only in Metro Manila but the entire country. They likened poor dwellers to Mary and Joseph, who, when Mary was pregnant with Jesus, knocked from one door to another only to be offered a stable to give birth.

“In the spirit of Advent and Christmas season, God has inserted himself to experience the life and struggle of the urban poor people. And we could not do anything better than what he did,” Fr. Joe Dizon of the National Clergy Discernment Group said during the two-day Church people – Urban poor Solidarity Conference held at Adamson University.

The two-day conference paved the way for Church people and urban poor groups and its local leaders to discuss important topics that affect the lives of poor dwellers such as joblessness and wages, inaccessible social services, violent demolitions, relocations of urban poor dwellers to far-flung areas and militarization of communities resisting demolition. 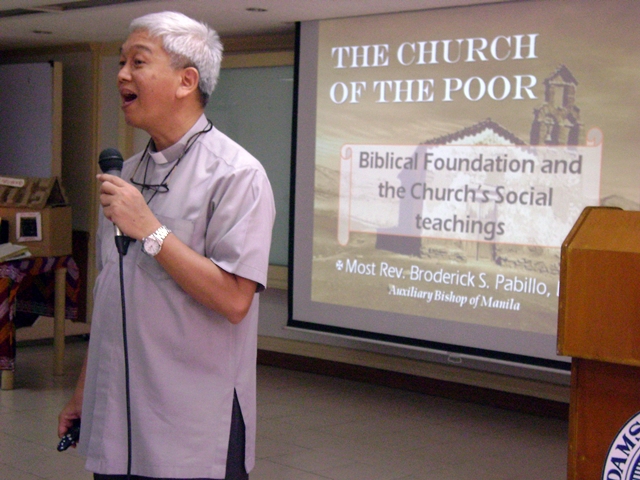 In his welcome remarks, Fr. Gregorio Banaga Jr. CM, president of Adamson University, said the plight of the urban poor is hardly felt by others even if they are very much part of the daily urban life. He added that due to busy schedules, there is almost no opportunity to get to know the urban poor unless there is demolition or fire.

“Special preference is given to to the poor because they are the most who are in need,” Most Rev. Broderick Pabillo DD, Auxiliary Bishop of Manila, said, “It is the way of Jesus Christ. He, too, was poor and he chose to serve the poor and his followers were also from the ranks of the poor.”

Yet, Pabillo said, the attitude of most people toward the poor is either disdain, indifference, patronizing or using the poor for their own benefit. He added that what the church people must have is “genuine love and concern for the poor.”

No homes, no livelihood

In a dialogue, urban poor groups were given an opportunity to share what they have been going through under the government’s slogan of “development.”

“Many workers hardly earn the minimum wage.” Allan Garcia, a member of Anakpawis, said in the conference. He said that in the name of development and resolving the heavy flow of traffic, the Metro Manila Development Authority has put the blame on street vendors who are merely trying to earn a living.

Authorities, Garcia said, would pour gasoline on the wares of the vendors — who, when they get home, would be confronted with threats of demolition.

Glecy Macabali of Save Freedom Island Movement said that about 17,000 individuals would lose their source of livelihood from the Gulungan Market in Parañaque as the government plans to reclaim the area.

Through the Urban Development and Housing Act, Macabali said, the government only made demolitions legal for as long as they “follow” the requisites that the law provides. She said it is now being used against the urban poor, adding that the law is “useless” and “would not serve the interest of the poor.”

Their community is putting up a good fight to save Freedom Island, which, Macabali described as a very beautiful place. She said it is home to migratory birds, endangered species such as the Philippine Duck and mangroves. The Freedom Island has also served as protection from sea surges and flooding for the residents of Parañaque and Las Piñas City. If the project continues, she said, we would bid goodbye to our country’s natural resources.

Urban poor hardly have access to social services even if they are in the metropolis. Fe Ramirez, a member of a local chapter of Gabriela in Batasan, Quezon City, said women in their areas do not have access to health care. Their check up ends, she said, once the doctors ask them to have laboratory tests because it is very expensive.

“How can we have extra budget for our health care when there is an everyday threat of demolition, massive layoffs and soaring prices?” Ramirez said.

Ramirez’s family was a victim of land grabbing in Eastern Visayas, forcing their family to migrate to Metro Manila. Her father, then a farmer, worked as a construction worker, earning only $2.3 a day.

“I wanted to finish high school but due to financial constraints I had to work as laundrywoman at the age of 12. It was then that I first experienced having to wash piles of clothes that are higher than me.” Now, Ramirez said, she, like most mothers in their community, only dreams that her family eat at least twice, not even thrice, a day.

Those communities which the government was able to convince to move to the relocation sites they offered suffered a worse fate.

“Until now, we have not yet received a single centavo of the money the government promised when they relocated us. We found out too late that the only plan that the government has for us was to remove us from our homes, never mind how we are going to survive,” Mercy Merilles said in the conference.

Merilles and her family were displaced from their home in San Andres Bukid, Manila in 2003. They were relocated to Kasiglahan Village in Rodriguez, Rizal. Here, she said, the family’s small income is further reduced because their transportation cost have increased by $2.3 a day.

She added that housing, which is supposedly a government service, has turned into a business, adding that the homes that were given to them were not for free. Families would have to pay for their homes for the next 30 years.

Another thing that worries Merilles is the safety of their family. In 2004, the flood water rose up to their neck and, in 2009, during Typhoon Ondoy, up to their roofs.
Those who have plucked up the courage to question what they are going through have been subjected to militarization and red tagging as fronts of the Communist Party of the Philippines.

Fernando Sevilla, president of Nagkakaisang Samahan sa Kadiwa, in Navotas, said one of their colleagues Antonio Homo was murdered for participating in their struggle for their right to housing. Their organization suspects that it was Sevilla who the perpetrators planned to kill.

“The Philippine Navy continues to look for me in our community,” Sevilla said, “What have we done to deserve this harassment? The government has done nothing but to commit human rights violations.” 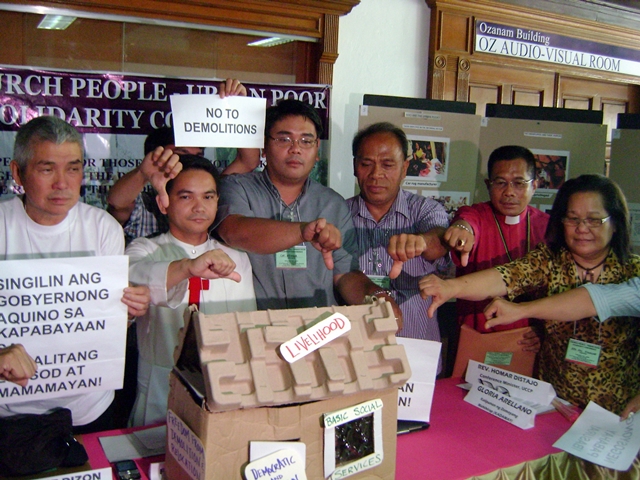 According to Pabillo, helping and serving the poor is deeply rooted in the teachings of Church. It was in 1962 that the Catholic church was officially referred to as the “Church of the Poor,” as cited by then Pope John XXIII in the second Vatican Council.

“The spirit of the Lord God is upon me, for he has anointed me to bring the good news to the afflicted. He has sent me to proclaim liberty to captives, sight to blind, and let the oppressed free, to proclaim a year of favor from the Lord,” Pabillo said, quoting a biblical passage.

He also cited the Gospel of Five Fingers, “You did to me.”

Pabillo said the bible offers many instances where God chose the poor to shape the history of mankind. They are Abraham, Jacob, Joseph the dreamer and the people of Israel, who were then enslaved by Egyptians. He also cited writings of popes such as Pope Paul VI’s Populorum Progressio in 1967 and Pope John Paul II’s Sollitudo Rei Socialis in 1987 that reminds the church and laity of their commitment to the welfare of the poor.

In the Church’s preference to serving the poor, Pope John Paul II said in 1984 that he has “made and continue to make this option my own. It is an option which is unswerving and irreversible.”

“It is the task of the Church to help in the transformation of society,” Pabillo said. He added that as Church of the Poor, Church people and lay are tasked to simplify their life, defend and vindicate the rights of the poor even if it spells alienation or persecution. it should have pastors who would learn to be with, work with and learn from the poor.

Pabillo added that the church should “orient and tilt its center of gravity in favor of the needy.”

Pabillo said for genuine development to take place, the approach should be holistic. “SM is not a gauge for development. How can you call the presence of SM as development if the people living near it have no jobs?” he said. SM is the country’s largest mall chain.

“Development for all,” Pabillo said, adding that “people should not be sacrificed in the altar of development at the expense of poor people.”

In a press conference, Fr. Dizon of the National Clergy Discernment Group said there is no concrete poverty eradication program under President Benigno S. Aquino III.

“I was recently asked what I know about Aquino’s programs for the poor. But I know nothing except for demolition and displacement,” UCCP Bishop Constante Claro said, “The Church is committed to speak in behalf of the voiceless — not only to speak but to shout, not only to shout but also to struggle with them.”

“The so-called Public-Private Partnership projects only bring about economic development in favor of big businesses. The government sees these as viable solutions to ease the sufferings and pains of the people but, in reality, deprive them of respect as persons with dignity,” the solidarity statement read.

Church people and urban poor groups have also agreed that the government has not made any effort to provide livelihood and basic social services. “Jobs are scarce and security of tenure is not assured given the current practice of the contractualization of labor.”

Joy Lumawod, chair of urban poor group Kadamay – National Capital Region, said that since Aquino waged war against the urban poor, they estimate about one demolition per month under the current administration.

Instead of addressing the roots of the problems, Carlito Badion, vice chair of Kadamay, said, the government has only taught its people to beg and rely on dole outs. “What the poor needs is a job with a just salary,” he added, “Urban poor people has been, instead, hit by a police truncheon.”

“The urban poor are not anti-development. We just want our welfare to be included in government plans,” Badion said.

Church people have agreed in their solidarity statement that the Conditional Cash Transfer program, the Aquino government’s key anti-poverty project, “does not address strategic livelihood concerns but only grants minuscule economic benefits.”

“CCT is not enough. What they need is a long term (poverty eradication program). They have no homes, no jobs,” UCCP Rev. Homar Distajo said, adding that in their recent immersion trip in the community in Smokey Mountain, they could not see any health and safety projects that the government should implement for their welfare.

Anakpawis Rep. Rafael Mariano, who graced the conference, said that unless the government implements genuine land reform and national industrialization, poverty would not be eradicated in the country.

The solidarity message said government policies seemed to have forgotten to factor in the welfare of the urban poor sector. “What will ‘development’ be when people are blinded by the glare of the arrogant lights of profit and the mantra of globalization and millions are pushed into further misery?”

The solidarity message further read, “Together, we must engage the government to factor in our sisters and brothers in the urban poor in development plans that would result to job opportunities, just wages, better social services and dignity.”