According to Samahan ng Ex-Detainees Laban sa Detensyon at Aresto (Selda), there are 360 political prisoners in the country, including the 78 who were arrested under the Aquino administration. Eleven of them are elderly, while there are 43 who are sick. The group said these political prisoners should be released on humanitarian grounds.

“The political prisoners who have been languishing in jails for years don’t have money to buy for their medicines. And yet, the Aquino government will use people’s money for a human rights violator like Arroyo,” Fr. Dionito Cabillas of the Promotion of Church People’s Response (PCPR), said.

Arroyo, now representative of Pampanga’s second district, has been under hospital arrest for charges of electoral sabotage. The local court recently issued a ruling ordering her transfer to the government-run Veterans Memorial Medical Center. Malacanang expressed willingness to shoulder the costs of Arroyo’s hospitalization. 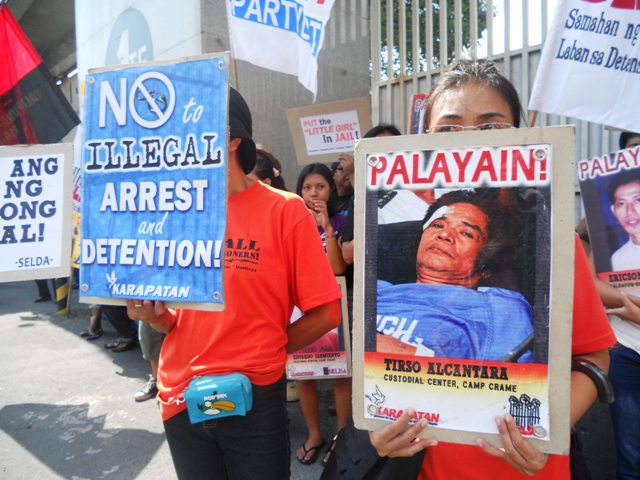 In the same vein, Bayan Muna Rep. Teddy Casiño said, “It is ironic that Gloria Macapagal-Arroyo, the one responsible for so many human rights violations, is being given special treatment and even pampered by the Aquino administration while her victims have to go on a hunger strike just to air their demands that should and can readily be granted by the authorities.”

Since Dec. 3, political prisoners in various detention facilities have launched hunger strike and other forms of protest.

“Arroyo should be nowhere but in jail,” said Angie Ipong, Selda secretary general.

“This [special treatment to Arroyo] is unacceptable for the 360 political prisoners who are charged with trumped up charges and imprisoned because of political beliefs, who are now languishing in jails in dire conditions,” Ipong said.

“She has no life-threatening illness, but is very comfortable in the hospital. Political prisoners, on the other hand, do not receive proper medical treatment for their grave illnesses,” Ipong said.

The group cited the case of Crisanto Tomarse Fat who died of heart ailment while in jail at the Negros Provincial Jail on Sept. 20. Fat, a peasant leader in Moises Padilla town in Negros Occidental, was falsely charged with illegal possession of firearms and explosives.

Rolando Pañamogan, 47, arrested in January 2002, is suffering from diabetes, toxic goiter and congestive heart disease. Pañamogan, a leader of Kilusang Magbubukid ng Pilipinas in Ponpunan, Baybay, Leyte, is now detained at the New Bilibid Prison in Muntinlupa City. He has been confined at the NBP hospital, where facilities and attending medical personnel are scarce. On several occasions, he had been rushed to the clinic for shortness of breath and convulsive seizure. “He, who is not guilty of the trumped-up charges the government filed against him, has no money to buy for his medicines,” Cabillas said.

Another political prisoner detained at the NBP, Rogelio Natividad, 61, has been in jail for the last 20 years. “Compounding his long years of imprisonment are the inhumane conditions in jail where there is meager food ration and poor hygiene which has resulted in his kidney infection, ulcer and hypertension. He has been found to have kidney stones, which is currently causing him pain,” Selda said.

Bernardo Andrade, 61, a fisherman from Old Sagay, Sagay City, Negros Occidental, and who has been detained for ten years already, has diabetes, asthma and hypertension. Since his arrest in 2001, his family had never visited him for lack of financial and material support.

Cresenciano Inocerta, 64, has contracted tuberculosis while inside the jail in NBP. He underwent treatment for six months. He has been considered healed of tuberculosis but he continues to suffer from asthma, arthritis and constant cough. Like Andrade, Inocerta has never been visited by his family from Valencia, Negros Oriental due to lack of finances.

Manolito Matricio, 60, from Mamburao, Mindoro Occidental, has been suffering from arthritis, diabetes and hypertension. He is one of the “Mamburao 6” who were convicted of killing the two sons of a local land lord in Mamburao, Occidental Mindoro.

Emeterio Antalan, one of the detained consultants of the National Democratic Front of the Philippines (NDFP) and now at Camp Bagong Diwa has kidney problems and fluctuating blood pressure. He had collapsed while he was in jail in Nueva Ecija but did not receive proper medical attention nor was he rushed to the hospital, according to Selda.

Selda called on Aquino to release political prisoners in time for the commemoration of the International Human Rights Day on Dec, 10, like what he did when he ordered the withdrawal of charges against the Morong 43 last year. The Morong 43 health workers were illegally arrested in February 2009 while conducting a medical training in Morong, Rizal. They were detained for ten months.

“In the spirit of the commemoration of the International Human Rights Day, we call on Aquino to the release of political prisoners, especially the sick and elderly, as this is a just and humane act that renders justice for all those who were illegally arrested, tortured and detained,” Ipong said.

The group also reiterated their call for the release of all political prisoners through general, unconditional and omnibus amnesty.