“We are watching very closely. The present administration must demonstrate that the Philippines has turned the page and a new chapter where freedom and justice prevail has begun.” – Beaconsfield United Church of Canada

MANILA –Church leaders have called on their faithful to help in hunting down retired Army Maj. Gen. Jovito Palparan Jr.

Palparan, charged with kidnapping and serious illegal detention in connection with the disappearance of the two missing University of the Philippines (UP) students Karen Empeño and Sherlyn Cadapan, remains in hiding after a court ordered his arrest last Dec. 20. A P1-million bounty has been offered for information leading to Palparan’s arrest.

Speaking in a press conference, Bishop Reuel Norman Marigza, general secretary of the United Church of Christ of the Philippines (UCCP) said their Church has also experienced the anguish of losing pastors and lay leaders in Palparan’s ‘gruesome litany of death.’

Marigza cited the killing of Isaias Manano, Rev. Edison Lapuz and the disappearance of Pastor Andy Pawican and blamed the ‘not-so-mysterious death squads that shadowed Palparan wherever and whenever he was assigned.

Manano, son of a UCCP pastor and the local church’s youth leader, was gunned down on April 28, 2004 in Calapan City, Mindoro Oriental. At that time, Palparan was assigned in the province as then commanding officer of the 204th Infantry Battalion. 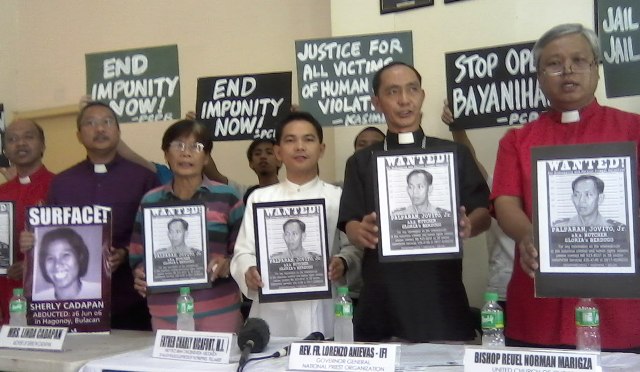 Lapuz, meanwhile, was killed by motorcycle-riding men on May 12, 2005 in San Isidro, Leyte. Palparan was then the commanding officer of the 8th Infantry Division, which covers Eastern Visayas.

On May 21, 2006, Pawican, then assigned at the UCCP outreach congregation in Pantabangan, Nueva Ecija, was taken by soldiers of the 48th Infantry Battalion for questioning. He was killed. His months-old daughter, who was with him the day he was taken, was returned with his blood on her dress. At that time, Palparan was the commanding officer of the Philippine Army’s 7th Infantry Division based in Fort Magsaysay in Laur, Nueva Ecija.

In the same vein, Rev. Fr. Lorenzo Anievas of the Iglesia Filipina Independiente and governor general of the National Priest Organization, related how their members became victims of violence perpetrated by state agents.

Anievas cited the killing of Fr. William Tadena and Supreme Bishop Alberto Ramento, both of whom were staunch supporters of Hacienda Luisita farm workers.

“If they can kill leaders of the Church, what else could they do to ordinary people who only fight for land, jobs and the right to a decent life?” Anievas said.

Anievas said they would use the pulpit to mobilize the faithful to bring Palparan to justice.

Meanwhile, Rev. Marie Sol Villalon of the Promotion of Church People’s Response (PCPR), called on Aquino to use the full force of the law and to mobilize the hundred thousand-strong military and police forces he commands as commander-in-chief to arrest Palparan.

In its statement, the National Council of Churches of the Philippines (NCCP) said the arrest and trial of Palparan would serve notice to all perpetrators of extrajudicial killings, enforced disappearances, torture and other gross attacks on human rights that they will be made to answer for their crimes.

The NCCP said Palparan “personifies the brutality and notoriety of the Gloria Macapagal-Arroyo administration for its gross, systematic and brazen violation of human rights. The NCCP noted that instead of being punished, Palparan was rewarded with promotion and accolades by the past administration.

The NCCP said bringing Palparan and his other co-accused who is still at large, M/Sgt. Rizal Hilario, to court is “a concrete step to heal this broken land.”

“We urge the government of President Benigno Aquino III to relentlessly pursue the arrest of Maj. Gen. Palparan and put him to trial even as we appeal to him to stop the human rights violations that continue under his watch…Impunity will stop if past and present human rights violations will be accounted for,” Rev. Fr. Rex B. Reyes Jr., NCCP general secretary, said in a statement.

Speaking at the press conference, Rev. Shaun Fryday of the Beaconsfield United Church of Canada said the Canadian people join the Filipino people’s call for an end to impunity.

“We are watching very closely. The present administration must demonstrate that the Philippines has turned the page and a new chapter where freedom and justice prevail has begun,” Fryday said.

Mrs. Erlinda Cadapan, mother of Sherlyn, agreed. “Palparan became a general because he killed and disappeared many people. He acted based on the policy of then Arroyo government.”

She thanked the Church people for their continuing support.

“I search for justice every day. It’s been almost six years [since Sherlyn disappeared],” Mrs. Cadapan said. “I have always challenged the government to bring my daughter before the court if she committed any crime. Until now, at this very moment, Sherlyn is still missing.”

Mrs. Cadapan called on Palparan to come out. “He should face us. Am I more courageous than him now?” she said.

The mother also criticized the transfer of two of the accused from a civilian detention facility in Bulacan to Fort Bonifacio, home of the Philippine Army.