Boracay Island from the eyes of an Ati

BORACAY ISLAND, Aklan — Along the busy stretch of restaurants, bars and shops of Boracay Island’s world famous white beach, Norberto Marcelo and his family sat together, huddled as if they were planning a game strategy.

Norberto and his family are Atis, an indigenous peoples group who served as Boracay’s first dwellers. They were, however, pushed farther into the fringes of the island when its white beach, and eventually almost all parts of the island, was developed into a tourist destination, which is well-known internationally.

Norberto makes a living as a fisherman. His daily catch, which would normally amount to $2.3, is just enough to buy rice for his family. Meanwhile, Potenciana, his wife, grows vegetables in their backyard. Their income hardly suffice for their needs.

“We eat only once a day, usually around 10 a.m.,” Norberto said. When asked if they do not get hungry in the middle of the day, “Sometimes. But what can we do? Life is difficult.”

The situation has forced them to ask for alms on the streets of Boracay, like other families of Ati who would flock the tourist spot after a day of hard work. Their conditions paint an irony to what most people would call tourism and development. 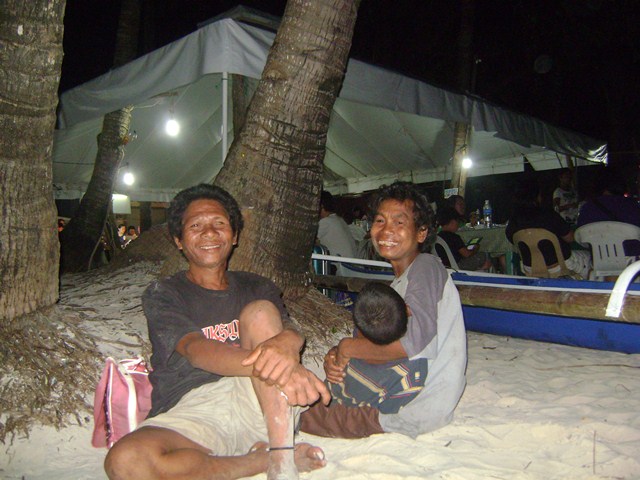 According to articles found online, Boracay was “discovered” by Sofia Gonzales Tirol and her husband Lamberto Hontiveros Tirol in the late 1800s and they eventually took ownership of some parts of the island.

Norberto, who then lived in the village of Bulabog, regularly visited the white beach during his younger years. He described it as “full of thorns” and the “shores had capiz shells.”

“The sand was so white. You would not be able to stand looking at it because it is so bright, especially around noon time. It sparkles,” Norberto told Bulatlat.com, when asked how Boracay looked back then. “It was then definitely cleaner,” he adds.

Slowly, as tourists started to flock the island, Norberto said, he witnessed how the Boracay changed. Their lives, too, have changed. Many atis were displaced from their homes to give way to the establishments that were being constructed, like hotels and shops. Even Norberto and his family were not spared. In fact, the small parcel of land they call home is owned by the Tirol family.

“So far, they are not asking our family to leave. Maybe they took pity on us. For the meantime, we are cultivating the land so we can live,” Norberto said.

No job opportunities for Ati

As restaurants and shops started to spring along the stretch of the white beach, Norberto said, he and other Atis did not benefit from it.

“We were not able to finish our schooling so we could not land a stable job in any of the establishments,” Norberto said. If they are lucky, the atis are sometimes hired as construction workers for new restaurants or when they are doing renovations.

Norberto, like other Ati families , begs for money on the busy stretch of Boracay’s white beach, especially, he added, when they have emergencies. When Bulatlat.com interviewed Norberto, his wife Potenciana was busy tending to their eight-year-old son who was not feeling well.

“He complained that he has headaches. We brought him to the hospital and the doctors prescribed medicine. But since we do not have extra money, we have no choice but to go here tonight and hope somebody would take pity on us,” Norberto said.

Norberto was neither happy nor proud that they survive their daily needs, mostly through alms. He said that if only they have stable jobs and a decent income, they do not have to go through all of these.

“We remain poor. Nothing has changed,” Norberto said.

Despite the daily struggle they need to confront, Norberto remains optimistic that they will surpass these challenges soon. He speaks highly of his eldest daughter Kia, who is studying through a scholarship program provided by the Department of Social Welfare and Development.

“She speaks good english. She studies day and night,” Norberto said. At times, he would warn Kia not to get herself tired from too much studying. “I told her that she can always quit. But she is determined to finish her education.”

When asked if he is proud of their daughter, he and Potenciana smiled teasingly and said, “Yes, but she has dark skin.”

Kia would always remind his parents whenever they are heading to Boracay’s white beach not to get into trouble. She would kid her parents that she would send them to jail. “And we always keep that promise,” Norberto said.

At 10:00 p.m., Norberto and his family would be heading on their way home. If they are lucky enough to get a few donations from tourists, they would ride a tricycle. If not, they would walk home. “We are poor but we are hopeful that we can surpass these trials. We remain happy in our life,” Norberto said.