“The government is doing nothing because the prices of oil are controlled by the Big 3.” — Piston member

MANILA – Edwin Bermeo, 55, driver of a FX, a public utility vehicle, complained about the incessant oil price hikes this month. The price of diesel has increased by P3.20 ($0.07) per liter. Oil companies hiked the prices of petroleum products four times since the start of the year.

Bermeo said his net income per day has shrunk to only P200 ($4.65), not enough to feed his six children. Like many drivers, Bermeo works for 14 to 16 hours per day.

“The government is doing nothing because the prices of oil are controlled by the Big 3,” Bermeo said in Filipino, referring to Caltex, Petron and Shell. “And there is the VAT [value added tax] which should have been added to our meager income.”

Bermeo is one of the members of Pagkakaisa ng mga Samahang Tsuper at Operators Nationwide (Piston) who joined the noise barrage against oil price hikes, Jan. 24, in Cubao, Quezon City. The transport group vowed to hold a weekly noise barrage “to pressure President Benigno S. Aquino III to act decisively on incessant oil price hikes and overpricing of oil.” 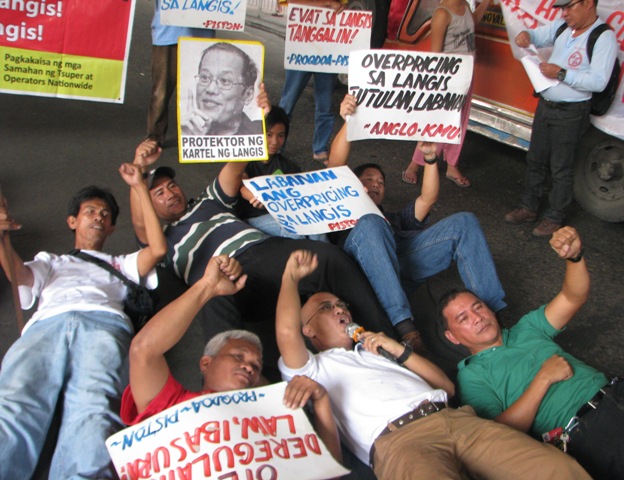 The drivers of jeepney also bear the brunt of oil price hikes.

“Jeepney drivers take home an average of P300 ($6.98) a day,” Floranda said. “If you deduct the cost of maintenance and the bribes taken by crocodiles (referring to traffic enforcers), what else would be left?”

For his part, George San Mateo, Piston national president, called on Aquino to order the House Committee on Energy to begin deliberations on bills seeking to junk the Oil Deregulation Law (House Bill 4317) and to nationalize the oil industry (House Bill 4355).

San Mateo criticized Batanes Rep. Henedina Abad, chair of the House Committee on Energy, for “sitting on the urgent bills filed by progressive lawmakers.” San Mateo said that despite their repeated appeals, Abad has not conducted any hearing on both bills.