MANILA – A global alliance of overseas Filipino workers express alarm over plans of the Department of Foreign Affairs (DFA) to close 12 Philippine embassies and consulates abroad by the end of the year. Migrante International said OFWs are up in arms against the DFA’s plan and expressed their disappointment over the administration of President Benigno S. Aquino III.

In a statement, Migrante International chairman Garry Martinez said, “The DFA had announced plans to close down at least 12 Philippine embassies and consulates last year, during budget deliberations, as part of the Aquino administration’s so-called austerity measures. The plan is to complete the closures by the end of 2012. They, however, refused to disclose which embassies or consulates are in danger of closing down.”

“There was no consultation whatsoever, Ambassador Carlos Salinas visited the Filipino community in Barcelona and he regretfully announced that the Consulate has to be closed by the end of July. It is already final. The Filipino community in Barcelona mobilized and petitioned for the establishment of a full Consulate (here) but now they decided to close it down without even consulting us. They were just informing us because the decision has already been taken,” Tuaño said in an interview through e-mail.

Same thing goes to the Filipino community in Palau where, according to news reports, Filipinos were not consulted about the closure. The Filipino Community in Palau (TFCP) was quoted as saying “We were very surprised, worried and concerned because we do not understand the reasons. We cannot think how our government decided without even consulting us Filipinos in Palau.” About 5,000 Filipinos are currently working in Palau, said the report. 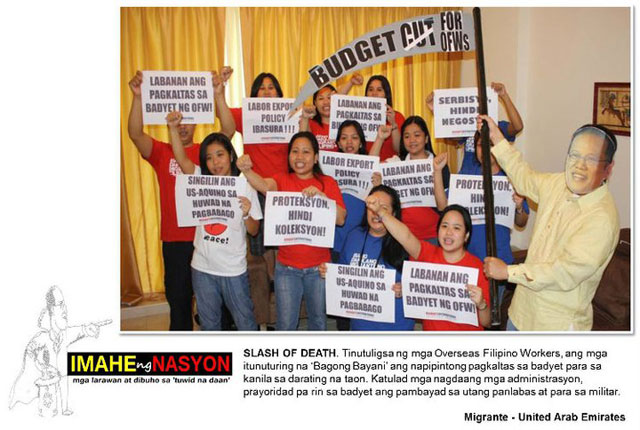 Overseas Filipinos are situated in at least 239 countries around the world, according to Migrante and there are only 66 Philippine embassies, 23 consulates and four diplomatic missions worldwide.

“Not only is it highly impractical but outright insensitive to the plight of our OFWs. We have a shortage of Philippine posts abroad as it is. It is unfortunate that the Aquino administration is assailing embassies and consulates, the very support system of our OFWs abroad, for its austerity measures and at the expense of welfare services for OFWs.”

“Spain is in economic crisis right now; some of our fellow countrymen also don’t have work; this is the worst time to abandon them,” said Tuaño. He added that closing the Philippine consulate might send a wrong signal to Filipinos. Their right to vote will also be affected, said Tuaño.

“They won’t encourage political participation through absentee voting with the closure. The first absentee voting held two years ago was a success here, it’s one of the posts in Europe with the highest voter turnouts. Noynoy won here, Drilon won here. If they close the consulate, and leave it to Madrid, people will rather not vote.”

This was countered by Martinez saying that to close down Philippine embassies and consulates just to save funds is irrational, said Martinez. He added that the 93 existing Philippine posts around the world only enjoy an average budget of P1.07 million ($25,476) to P1.6 million ($35,095) each.

“The bottom line is that they plan to close down posts that are already operating on very low funds. Compared to other agencies that enjoy immensely huge budgets that breed corruption and misuse of funds, they choose to cut down on embassies and consulates. Where is the sense in that?”

Migrante International opposed budget cuts in the 2011 national budget, especially on direct services for OFWs in concerned agencies including the DFA. According to the group, in the P1.8 trillion budget ($42.2 billion), direct services for OFWs in concerned government agencies only amounts to no more than P3.14 billion ($74 million) or only 0.17 percent of the total budget, or a per capita spending of P261.83 ($6.2).

Funds for direct services for OFWs in concerned agencies was slashed by approximately P792 million ($18.4 million), the group said.

“The closure of PH posts and embassies is one direct and concrete effect of budget cuts on OFW services,” Martinez said.

“Services to Filipinos will be greatly affected”

Closing down Philippine embassies and consulates will have direct effect on services to Filipinos working overseas, Martinez said.

Tuaño said Philippine consulate in Barcelona serves the provinces of Catalonia, Barcelona, Girona, Tarragona at Lleida and islands of Baleares, Ibiza, Mallorca, Menorca and Formentera, as well as the country of Andorra, a small country between Spain and France.

“Many of our fellow countrymen here work as domestic helpers or work in restaurants. Going to Madrid is costly for them. They will have to spend time and money to arrange their papers and passports.”

Tuaño also expressed concern for Filipino seafarers docking in Spain. There are two important ports in Barcelona and Tarragona where ships where Filipino seafarers work dock. “Some of them have urgent needs; does the Philippine government expect that they will go to Madrid when they need help?”

The global economic crisis that hit Europe and the rest of the world made life difficult also for Filipinos working overseas. Tuaño said the economic crisis has resulted to joblessness of Filipinos in Spain. “Some ask for food from social workers because life is very difficult here. Even Spainish nationals here leave their country to work abroad.” Tuaño has been in Barcelona for seven years and have two jobs to sustain him.

Meanwhile, Martinez cited countries where there are big concentrations of overseas Filipinos or numerous numbers of OFWs in distress but are lacking in Philippines posts.

In Tanzania, for example, where hundreds of Filipino seafarers are in jail for illegal fishing, there is no Philippine post. The closest embassy OFWs in distress could run to is the Philippine embassy in Kenya. The embassy in Kenya, on the other hand, covers 12 other African countries.

In Saudi Arabia where there is an estimated 1.8 million OFWs there are only two Philippine posts, an embassy in Riyadh and a consulate in Jeddah. Most of Migrante International’s cases of human and labor rights abuses, mysterious deaths, jailed OFWs and OFWs on death row are in Saudi. Posts in Saudi have also been reported “not accessible” to Filipinos in Saudi provinces. Hong Kong and Singapore, with more than 150,000 OFWs each, only have one embassy.

“The list goes on and on. The point is, we cannot afford to have less Philippine posts when more than 10 percent of our population is abroad,” Martinez said.

Filipinos overseas determined to fight for their rights

Filipinos overseas workers are up in arms against the closure of Philippine embassies and consulates.

According to Migrante, Filipino communities in Palau and Barcelona have already circulated petition letters, while overseas Filipinos elsewhere are gearing for protest actions. There are approximately 5,000 Filipinos in Palau, while Barcelona hosts a significant number of Filipinos , estimated at 30,000.

According to Tuaño, more than 20 Filipino organizations composed of various religious, civic and socio-cultural groups have expressed their dismay and disapproval over the government’s decision. Organizations such as Barcelona Exposure Club, Northern Star, Samahang Kabagis, Timpuyog ti-Ilocano, and Unified Bicolanos in Barcelona have taken their signature campaigns and lobbying initiatives to express their support for the retention of the Consulate.

Meanwhile, the Kapulungan ng mga Lider Pinoy sa Barcelona (KALIPI), a federation of Filipino associations in Barcelona, with the support of other organizations, has sent a letter of appeal to the Chairpersons of the House Committees on Overseas Workers Affairs and Foreign Affairs.