Perhaps the envy of most actors for landing a role in Hollywood film Bourne Legacy, John Arcilla is not your usual glamour boy; he is an environmentalist who always tries to do his share in protecting the environment.

MANILA – The first day of the Third Peoples’ Mining Conference held in Tagaytay City, south of Manila attracted not only environmental and mining activists from the Cordillera in the North to Bicol in south Luzon and from Visayas and Mindanao. It also had guests and participants from local government, such as the governor of Romblon, a board member from Eastern Visayas, some village captains, tribal council of elders, at least three members of the House of Representatives from the progressive partylist bloc, nuns and clergy, and artists and sports buff such as the award-winning stage and movie actor John Arcilla.

Filipino actor John Arcilla has joined the mining conference that started Thursday (March 1), to listen to the experiences of the gathered environmentalists and to exchange experiences and information on projects for the environment. Arcilla is also an environmental advocate and member of the Concerned Artists of the Philippines. 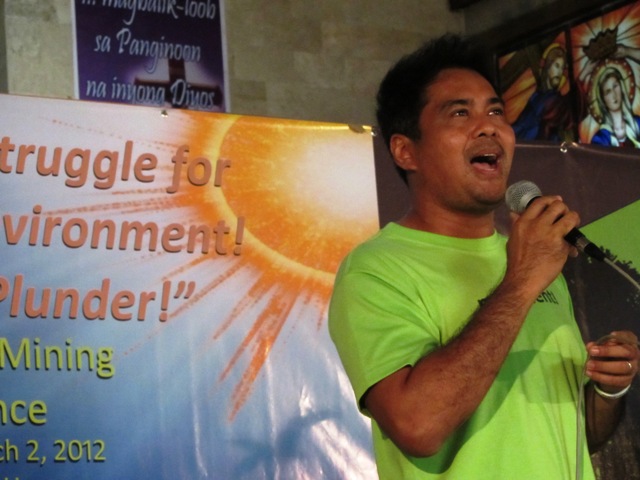 He delighted the national gathering with two well-applauded song numbers, which one of the conference emcees tried to sing as well after him. One of these songs was “Dilaw na Bathala” (Yellow God), the soundtrack of one of his films which garnered for him a Best Actor Award at a Berlin movie festival a couple of years ago.

That movie is about human trafficking in Mindanao

“In Mindanao they are not just extracting and exporting our rich natural resources, they are also exporting our human resources,” Arcilla said. His movie called “Ways of the Sea” exposes human trafficking in the southern province of the Philippines, starring Arcilla and Maria Isabel Lopez. Arcilla told the mining activists how due to poverty in Mindanao resulting from massive landgrabbing and mining-affected sources of livelihood, people are being forced to migrate. He said the “ways of the Sea” tells of women being lured to illegally cross toward neighboring country Malaysia, ostensibly to work at a canteen there.

But the women migrants are “being used by costumers, and that’s what they end up selling there – their bodies,” Arcilla said. He concluded his performance chanting the calls aired by the emcees praising the defenders of the environment.

Using art for the environment

Arcilla shared with Bulatlat.com at the sidelines of the conference that since 2003, he has been providing art workshops, including acting workshops to kids, asking no payment in return, except for the kids’ and their parents’ “acts of kindness for the environment.” He proudly reported that his Sining Kalikasan-honed child actors have been coming out in an environmental-inspired musical play.

Their foundation called CAPABLE was formally registered five years later, in 2008. Arcilla was president of Capable.

Its vice president, Antonio M. Dungo, is a fitness professional who also gives free exercise programs to kids and their parents. Like Arcilla, he requires no payment but he does ask his participants to look for “environmentally depressed” areas and make it alive by planting trees or cleaning up the environment.