“We formed a human barricade. We did not gear for a gunfight.” — Sheila Bernal, resident leader of Samahan ng Pagkakaisa at Rekonsilasyon sa Silverio.

SILVERIO COMPOUND, Parañaque City — One is confirmed dead as police dispersed the residents of Silverio compound in Parañaque City, April 23. Thirty-three others were arrested, including eight minors and two women, and several others suffered gunshot wounds.

“We formed a human barricade. We did not gear for a gunfight,” Sheila Bernal, a resident and president of Samahan ng Pagkakaisa at Rekonsilasyon sa Silverio, tearfully told Bulatlat.com shortly after the brutal incident.

Bernal and her husband, Fernando, were among the 25,000 families who are resisting the plan to demolish their homes in the 9.7-hectare community.

The land of the Silverio compound is the subject of an expropriation case by the city government during the term of Mayor Joey Marquez. The city government reportedly deposited P10.4 million ($241,860) to acquire the property and place it under a mortgage program.

Contrary to recent pronouncements by Parañaque City Mayor Florencio M. Bernabe, Jr., the demolition team had not only aimed for the talipapa (local public market). On April 10, 2012, the residents received a ten-day notice of demolition from the local government unit. There were reports that Henry Sy, owner of the country’s largest mall chain SM, has bought the Silverio compound to build condominium units they call Silver Homes. The SMDC, Sy’s real estate developer, denied their involvement in a statement they posted at their website.

Bernal said their group’s original plan was to form a barricade at the compound’s main road, near the village outpost. But the residents later decided to occupy Sucat Road to cause traffic, which would delay the demolition team in reaching their community.

“From 8:00 to 9:00 a.m., there were ongoing negotiations with the police,” Fernando said. He is a member of the community’s paralegal team tasked to document everything that transpired that morning.

While the residents were trying to forge a written agreement with the police that they would leave the Sucat road to allow private cars to pass and form the barricade in the community’s main road instead, the police threw teargas canisters toward them and then chaos began. 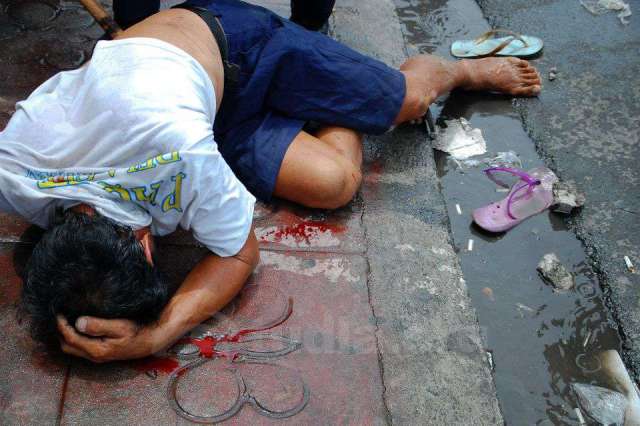 A resident sustains wound on his head(Photo by Tudla Productions)

Fernando counted at least 12 teargas canisters thrown their way. The residents then fought back, using stones and bottles and whatever they could get their hands on. Then, they heard gunshots.

“As soon as I heard the gunshots, all I could think about is how to bring my wife to safety. I know she would be targeted because she is a leader in our community,” Fernando said.

While Fernando was dragging his wife towards their home, a man who was standing next to them was shot in the leg. As they were nearing their community, they saw more residents who have gunshot wounds but could not go to the nearest hospital for fear of being arrested.

“How can stones compete with bullets?” Fernando asked, adding that while they were running, he could see snipers on top of a supermarket’s building.

Confirmed dead was Arnel Leonor, a 20-year-old resident of Silverio compound. According to his neighbors, Leonor was standing near the Sucat road’s island when a bullet pierced his head.

27-year-old Jun, not his real name, born and raised in Silverio compound, sustained wound on his right leg due to shrapnel. He was forced to attend to his wound.

Police chief inspector Enrique Sy later on confirmed to the media that Leonor was “dead on arrival.” Sy told the multisectoral fact-finding team that went to the community later that day that they have yet to investigate what really happened to Leonor and others who suffered gunshot wounds.

Video footage of some media outfits show members of Special Weapons and Tactics Team (SWAT) firing their guns at the residents. 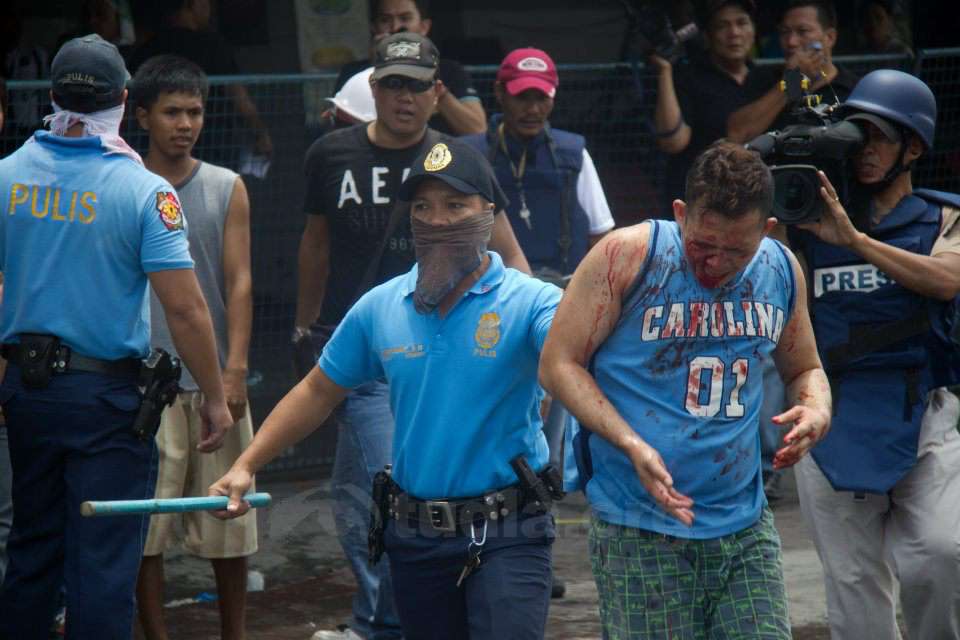 About 36 more residents were reportedly injured. Rodman Ortega, 16, was reportedly denied service at a nearby hospital after his family failed to hand in money for his immediate operation. A bullet pierced his right arm and it had needed immediate surgery. He was then brought to East Avenue Medical Center in Quezon City, almost a two-hour drive away.

Raymond Aquino, who was earlier reported to have died during the demolition, is at the hospital and in critical condition. Aquino was also part of the paralegal team. “It was his first time to join a rally,” Fernando told Bulatlat.com.

Of the 33 arrested, eight are minors. The 25 were charged with resisting arrest and disobedience to lawful order.

“Of course you will resist arrest if you know that you did not do anything wrong,” Anakpawis Rep. Rafael Mariano said while visiting the residents detained at the police station. 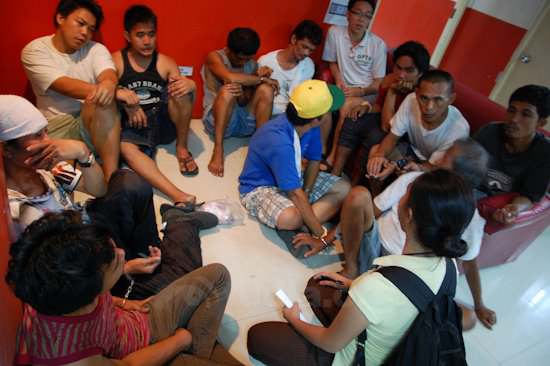 . Residents arrested after the demolition cramped inside the police station. (Photo by Tudla Productions)

Some of them said they were arbitrarily arrested by the police. Eddie Encio, 31, said he and his wife Ester, 43, were just checking on the demolition because they have a junk shop in Silverio located near the market.

“When my wife got off our motorbike, the police arrested her immediately. In fact, you can see in news clips that she did not even have time to take off her helmet,” Encio said. Cando is also a former editor of Manila Times and Remate.

“The police who arrived for the demolition are not from Parañaque. I know most of the police (here) because they would frequently go to my shop and ask for bribe so I could continue my shop’s operation,” Encio, who was born and raised in Silverio Compound, added. The local government unit is no longer renewing their business permits.

Three children, on the other hand, aged 13, 14 and 15 who were peddling some items, were asked by one of the policemen to pick up the stones on the road. “The policemen promised us that they would give us money in return but after that, we were arrested,” one of them said.

The three minors, who are not residents of Silverio compound, were immediately released. Others had to wait for their parents to pick them up. The Philippine law guarantees no criminal liability to children 15 years old and below.

After his medico legal, an 18-year-old resident who was arrested cried when the police told him he would go with the rest of the adults. His mother said that he is a special child. Ephraim Cortez, one of the lawyers who arrived with the fact-finding team, tried to negotiate with the police, saying the law provides that special children would have to be treated as minors. The police insisted they need to verify the claim first. Cortez said that he would request for a psychiatrist to check on the young man’s conditions.

“Our homes in Silverio were built from our sweat. Now, we shed blood to fight for it,” Paulo Quiza of Bagong Alyansang Makabayan-National Capital Region said in the indignation rally in the evening.

Quiza was part of the team of urban poor leaders, human rights advocates, church people, doctors, nurses, and other sectors who went to the community to investigate the incident. Makabayan President Satur Ocampo and Anakpawis Rep. Rafael Mariano also joined the team to visit the community.

“Since Aquino became president, there have been roughly 40 incidents of demolition. But this is definitely the worst,” Mariano said.

“We demand justice for the slain resident of Silverio compound. We call for the immediate termination of the demolition in Silverio Compound in Parañaque City. We call for an immediate moratorium on all demolitions across the country,” Kilusang Mayo Uno said in a separate statement.

Anakbayan, a progressive youth group, also condemned the violent demolition that led to the killing of a resident and injuring many. “The demolition should be stopped and officials responsible for the violence shooting should be held responsible. There should be an independent and impartial investigation of the crime and justice should be served,” the group said in a statement.

They added that the “arrests and murder done by the police is testament of how anti-poor, how violent and heartless the Aquino government is.”

“The killing in Silverio by police forces showed the callousness of the Aquino government toward the urban poor in order to promote the interests for profit of big businesses,” Kalipunan ng Damayang Mahihirap said. They also held President Benigno “Noynoy” C. Aquino III accountable for the violent dispersal.

“We call for justice for the victims of the brutality of this state. We promise no let up in this fight. The Filipino masses shall soon be able to end this oppressive government and its anti-poor and fascist policies,” Kadamay said.