A week before May 1, as P125 wage hike proposal nears Congress approval, the labor secretary and regional wage boards suddenly realized there is a need indeed for a wage hike.

MANILA – A week before May 1 Labor Day celebration, influential Senator Chiz Escudero declared support for a P125 across-the-board legislated wage hike. He said fears that a significant wage hike will cause inflation to rise and companies to close down are unfounded. In speaking thus, Senator Chiz joins the likes of Sarangani Rep. Manny Pacquiao, a boxing icon and famous media personality, who has declared since last year his support for the substantial wage hike proposal.

Echoing the long-time criticisms of the labor groups of the apparent failure of the country’s regional wage boards, Escudero also criticized the wage boards for failing to give workers a “just wage.”

Some regional wage boards are currently deliberating on wage proposals submitted by moderate trade union groups. But so far, Labor Secretary Rosalinda Baldoz has already dashed even the possibility that the said regional wage boards may break off from tradition and start granting wage hikes that are adjusted at least to regain lost purchasing power due to inflation. Even before the wage boards in the National Capital Region began holding public consultations, for example, Baldoz has announced that wage hikes may be granted but not higher than P21 ($0.49).

Escudero asserted the urgency of Congress stepping in to determine wages in the country.

The labor center Kilusang Mayo Uno (KMU) immediately hailed last Friday Sen. Francis “Chiz” Escudero’s declaration of support for a P125 across-the-board legislated wage hike, saying the influential senator is a welcome addition to the ranks of legislators supporting the call. KMU hopes Escudero can draw in more supporters to the cause.

Saying Escudero’s support is music to their ears, the progressive labor center hailed the senator’s support and strong statements as “most valuable.”

House Bill 375 or the P125 wage hike bill, filed by Anakpawis Partylist Rep. Rafael Mariano, is reportedly about ready to gain the approval at the committee level in the House of Representatives, while Sen. Ramon “Bong” Revilla has filed Senate Bill 1980 at the Senate.

Congress urged to step into wage-setting

“Sen. Escudero’s declaration of support for a significant wage hike, such as the P125 across-the-board wage hike that workers have been clamoring for, shows that support for our call continues to grow,” said Elmer ‘Bong’ Labog, chairman of KMU. He urged the country’s other legislators to listen to their constituents, to help them know “that workers and poor people need some relief to help them cope with soaring prices of basic goods and services.”

He ascribed the growing support of legislators for a significant wage hike as the result of persistence of workers and the poor in fighting for wage hike.

The Regional Tripartite Wages and Productivity Boards have all but lost credibility to most labor groups in the country. It does not help tht this year, wage boards such as that of the National Capital Region had spent months publicly rejecting proposals for a wage increase. The Regional Tripartite Wages and Productivity Board for the National Capital Region changed tack and announced only this month its openness to increasing wages, citing the erosion of workers’ purchasing power due to inflation. 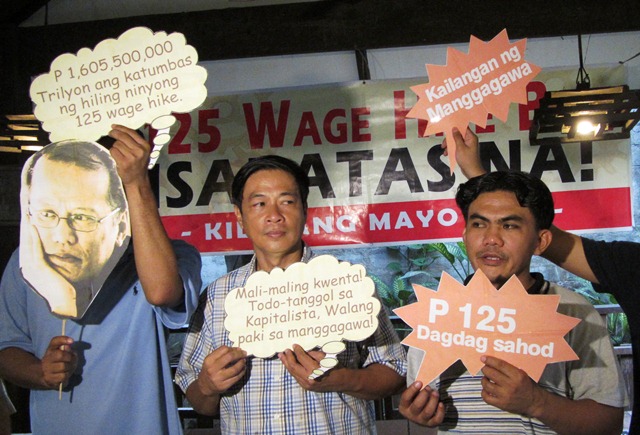 The belated realization of the wage boards of a trend that most labor groups have been shouting about for years now drew condemnation from unions.

“It is revolting to hear the NCR wage board recognized the need for a wage hike this late. A wage hike is already long overdue because the prices of basic goods and services have been soaring since last year,” said Labog.

Filipino wages one of the lowest

In rejecting calls for wage hikes, the Regional Tripartite Wages and Productivity Boardshave previously released statements that entry-level wages in the Philippines are higher than those in China, Vietnam, Indonesia and Thailand. But according to KMU, citing an August 2011 UBS (formerly Union Bank of Switzerland) study that surveyed 73 cities in the world, Metro Manila actually has the second lowest wage level and thethird lowest purchasing power among the surveyed cities. Filipinos shared the bottom list in wages and purchasing power with workers in Mumbai and Indonesia.

“Wages in the country may be higher than those in other countries, but that does not mean that Filipino workers are enjoying a better standard of living,” said Labog. He added that groups citing such figures should also put it in the context of the overall situation of workers in their countries, for they may be enjoying lower prices and higher state subsidy for social services.”

The Philippines has often landed on top of other countries in listing of the most expensive prices of electricity, water, staples and medicines. There have also been persistent accusations of oil overpricing in the country. All of which combine to lessen the Filipinos’ purchasing power. Reports said that over the years, the Filipinos’ wages have been left behind by price hikes.

Hikes in wages also compare unfavorably with hikes in workers’ productivity and growth of profits over the years.

A March 2012 study by independent research group Ibon Philippines shows that while prices have increased by 63 per cent in the period 2001-2011, wages have only increased by 45 per cent. The research group also dispels the usual employers’ warnings against wage hikes, about the firms losing and likely being forced to close down or raise prices. If the P125-wage hike were to be approved this year, at last, profits of firms in general will take only a 12-percent cut. That still leaves them 88-percent of their profits.