Finding fulfillment in serving the poor

MANILA – Life is getting more and more difficult nowadays and many Filipinos have been seeking work abroad. Health professionals for one opt to work abroad for the betterment of their family’s lives. But registered nurses Christ Ian Mostrales, 27 and Sean Herbert Velches, 27, chose to stay in the country despite the offers to work abroad.

Mostrales is a volunteer nurse in Samahang Operasyong Sagip (SOS), an organization of health workers that responds to disasters. He is also working as volunteer community health worker and a member of the Health Alliance for Democracy (Head).

Velches, on the other hand, is working as a staff nurse at the National Orthopedic Center for six years. He is the current president of the workers union and also an activist health worker fighting for their rights, as well as the people’s right to quality health and social services.

Both of them have the opportunity to work abroad. But turning their backs against the Filipino people who need them most is not an easy thing for them to do.

Heart to serve the people 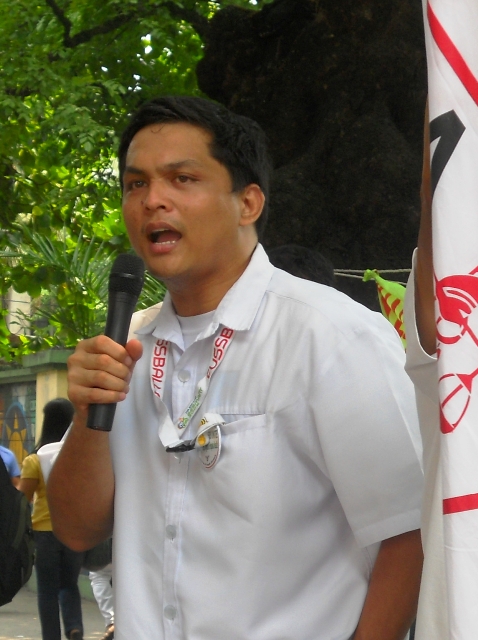 “With seven out of 10 people dying without seeing a doctor, all the more that health workers should stay,” Sean Herbert Velches said.A 27 year old nurse in National Orthopedic Center. (Photo by Anne Marxze D. Umil / Bulatlat.com)

Mostrales is from Mindanao. Before he went to volunteer work, he first worked as an emergency nurse for two years in a private hospital in their province. “After I passed the board exams in 2007 I landed a job in our province,” Mostrales told Bulatlat.com.

In 2009, SOS needed volunteers to respond to the victims of typhoon Ondoy. Mostrales who had a friend in the organization volunteered to be part of the team and his volunteer work has started then.

Meanwhile, Velches dreamed to be a priest. “I put the context of serving the people in Christian work so I went to a seminary,” Velches told Bulatlat.com.

But because many of his relatives are working in the US, his mother pulled him out of the seminary and forced him to take nursing instead. And when he passed the board exams six years ago, he was pressured by his parents to work abroad, especially when his father resigned from work due to illness.

“My mother who’s also a nurse wanted me to go to the US because my uncles and aunties are also nurses and they have established a care house in California,” said Velches.

Velches is the eldest among the four siblings. Their family is not well-off, he said, his father is also sick and he has siblings who are still studying. But he did not give in to his mother’s pressure. “The pressure is consistent and all I can do is to delay it. Luckily I found a regular job at the National Orthopedic Center,” Velches said. 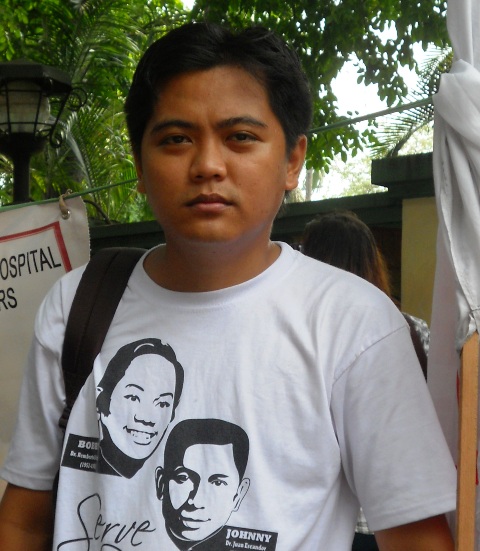 Christ Ian Mostrales, 27, is a community nurse committed to serve the poor than to leave the country for green pasture.(Photo by Anne Marxze D. Umil / Bulatlat.com)

Doing volunteer work and being a government nurse do not give them the luxury of buying things that they want. Velches said that what he gets from work is enough to help his parents and siblings while Montrales gets a small allowance for doing volunteer work.

“Of course I’m only human and when push comes to shove there comes a time when I am contemplating of getting a better paying job especially during the time when my father resigned from work because of an illness and my mother acquired and is paying many loans,” Velches said.

Montrales has a five year old son that he has to send to school. “Financial problems are common especially when you have a child that needs your support. Thanks to my parents who still supports me,” Montrales said. He is a single father. Like Velches, leaving community work and finding a higher paying job crosses his mind.

But the feeling of fulfillment of serving the underserved is beyond measure, said Montrales. “There is a big difference in working in a private hospital and working in the communities. In the hospital, you are able to help people but for a cost. In the community, there is a commitment to serve the poor even if there is no compensation.”

But the idealist nurses are still willing to keep the fight. “We are not romanticists. Of course we will not let wrong things to just happen when we, the health workers who are trying our very best to be of service to the countless poor patients, are being deprived of our benefits. We will be part of the social change that people, for the longest time, are clamoring for,” the high spirited Velches said.

On the national day of health workers, both Montreles and Velches joined hundreds of health workers in a march from España Avenue to Chino Roces bridge (former Mendiola bridge) crying out for justice that has long been denied to them and the people they serve.

“With seven out of 10 people dying without seeing a doctor, all the more that health workers should stay,” Velches said.