Other Story: Finding fulfillment in serving the poor

MANILA – The government has found a new way of creating jobs for unemployed nurses in the country. But for progressive health workers, this new employment scheme of the Department of Health (DOH) is deceiving and exploits newly-registered nurses.

The RN Heals or the Registered Nurses for Health Enhancement and Local Service is an employment program of the government to “address” the unemployment problem of nurses in the country. The program was launched by the DOH in February 2011. According to an article, more than 59,000 nurses applied for the program but only 10,000 nurses were accommodated by the program. Those selected were deployed to 1,221 rural communities nationwide.

The DOH partnered with the Department of Labor and Employment for the said program. Similar to the previous program of the government called the Nurses Assigned in Rural Services (Nars), nurses under the RN Heals program are also deployed to rural areas where health services are very much needed.

However, RN Heals provides only temporary employment. “This temporary employment program initiated by the government does not at all heal the pestering labor problems besetting the nursing profession for the longest time now,” Ma. Eleonor Nolasco, of Nars ng Bayan said. 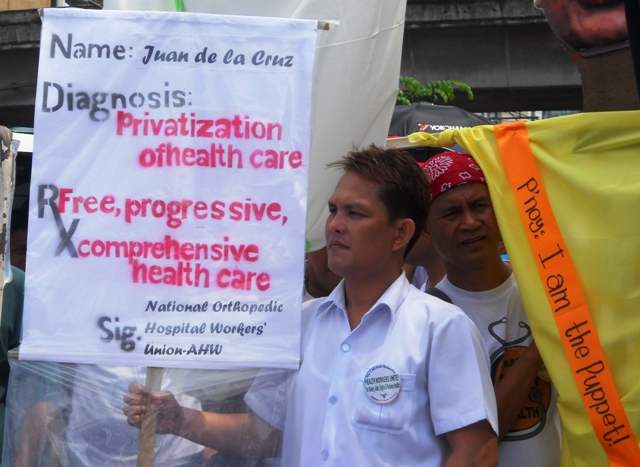 Nars ng Bayan, as well as other health organizations such as the Alliance of Health Workers (AHW) and Health Alliance for Democracy (Head) are criticizing the administration of President Benigno “Noynoy” Aquino III for providing a band-aid solution to the long-term problem of nurses in the country.

Nolasco said nurses under the RN Heals program are already qualified for entry-level positions, meaning they are entitled to benefits, wages commensurate with salary grade 15, security of tenure and protection against unfair labor practices.

But nurses under the program will only receive P8,000 ($190) and an additional P2,000 ($47) from the local government units (LGUs). The nurses also don’t enjoy benefits such as hazard pay, overtime pay and other benefits as stated in the Magna Carta of Public Health Workers.

“This falls short of just compensation for the nurses who are expected to do critical development work and provide quality nursing care in a community setting. In fact, the nurses in the public health sector should have been receiving a starting salary of P24, 887 ($592) per month, as stipulated in the Philippine Nursing Law enacted in 2002 but up to now has not been implemented,” Nolasco said.

RN Heals only provides a one year contract and nurses are not accorded union rights, a basic right stated in the labor code. “With the practice of contractual hiring, the government, in effect, is itself violating the provisions in the labor code and the nursing law,” Nolasco added.

A number of nurses are also working as volunteers in hospitals to augment the shortages. These nurses perform regular nursing tasks. However, being volunteers they are not shielded nor protected from possible work-related liabilities, Nolasco said.

“Volunteerism has now become like an added course for new registered nurses who, despite being eligible for entry-level positions, are made to work first as “volunteers” or enroll in expensive training programs in exchange for volunteerism and/or training certificates that give little assurance of being hired,” she added.

The Alliance of Health Workers (AHW) strongly opposed volunteerism-for-a-fee saying that it is a form of exploitation that takes away the dignity of professional nurses.

In some private hospitals, newly-registered nurses are in duty for 12 hours without compensation. Nolasco said nurses in private hospitals are also deprived of benefits, just wages and security of tenure.

Nolasco finds it ironic that despite the country having thousands of qualified nurses, there are still poor sectors and communities, especially those in remote areas, who continue to be underserved and deprived of even basic health care service.
She countered the claim of Labor Secretary Rosalinda Baldoz that plantilla positions for nurses in the public health system are already filled up. “The truth is that there are two to three nurses that share one plantilla position and with shared salaries also.”

While it is obvious that there is a need for more nurses and other health professionals to serve in the communities and in public hospitals, the government still continues to disregard the need to hire permanent nurses.

“The other side of volunteerism is the lack of employment opportunities for nurses despite the obvious need for their service. The national health budget remains very low as compared to the growing needs of the increasing population and our worsening health and economic conditions,” said Nolasco.