You Are Here: Home → 2012 → May → 10 → On Health Workers Day, health workers reiterate demand for salary hike, stop to privatization

“The government is passing its obligation to the private sector to reduce its social spending.” – Health Alliance for Democracy

Finding fulfillment in serving the poor

MANILA – Leopoldo Merdanio, 40, is a registered nurse working at the San Lazaro Hospital. He is single but his P17,000 ($404) monthly salary is just enough for him, his mother and grandmother to be able to live and eat decent meals three times a day. However, he is worried that as prices of basic commodities are soaring his monthly salary might not be enough to cover his family’s expenses.

“We have long been calling for an increase but it falls on deaf ears. What’s worse is that the government is reducing our benefits,” Merdanio told Bulatlat.com.

Republic Act 10069 declares May 7 as National Health Workers Day “to give due recognition to the important role and contributions of the health workers who provide vital health services to our people and to promote their rights and welfare and enhance their sense of worth and dignity.”

However, Merdanio and hundreds of health workers gathered on May 7 this year not to celebrate but to cry out for justice as the government continues to deprive them of their rights and that of the people they serve as well. Health workers from different hospitals, clinics, agencies and institutions marched from España Avenue to Chino Roces Bridge (former Mendiola bridge).

“We cry out for an immediate relief from our comatose state – health workers are battered with low salaries, inadequate benefits, inhumane working conditions and lack of job security.

These are the results of the worsening crisis and aggravated by the continuing implementation of cost-cutting, privatization and contractualization policies of President Benigno “Noynoy” Aquino III administration,” the Alliance of Health Workers (AHW) said in a statement. 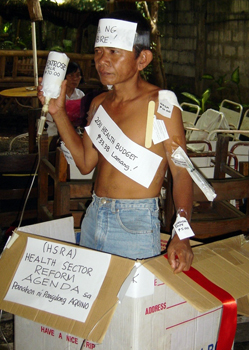 “Aquino has not given us any salary increase. He is just implementing the salary standardization law 3 approved in 2009 before he became president. We need a real salary increase,” AHW added.

“With our meager wages, many health workers are in deep debt. Health workers are forced to pawn their ATM cards to loan sharks to augment their needs,” Sean Velches, president of the National Orthopedic Center Health Workers’ Union-AHW said.

The health workers also denounced the attempts of the government to reduce their subsistence and laundry allowances. “We oppose all attempts of the government to reduce or diminish our laundry and subsistence allowances and to delay our hazard pay, as per the department orders and circulars of the Department of Budget and Management and DOH,” the AHW said.

Bayan Muna Rep. Teddy Casiño who joined the health workers in Mendiola filed House Resolution 2312, directing the Committee on Civil Service and Professional Regulation to conduct an inquiry, in aid of legislation, on the determination of subsistence and laundry allowances and hazard pay allotted for public health workers.

Casiño pointed out that it has been more than a decade since the rates of P50 ($1.19) a day and P150 ($3.57) a month were prescribed for subsistence and laundry allowances, respectively, of public health workers. But instead of upgrading the rates, Casiño said, the DBM even wants to reduce it. 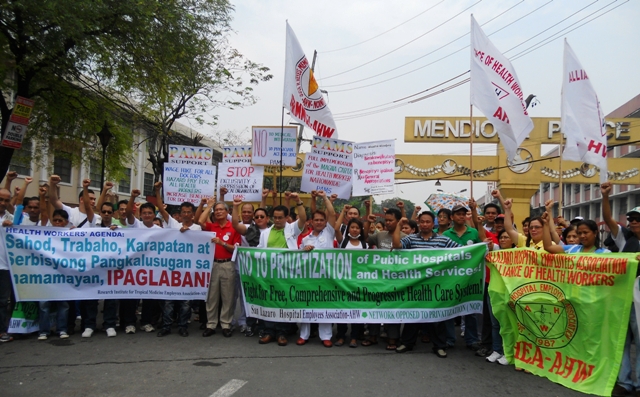 “As it is, the P50 daily subsistence allowance can hardly get you one viand yet it is meant to cover three meals. The P150 monthly laundry allowance is just enough to buy laundry detergent, cost of water and labor is not yet included,” Casiño said.

Hazard pay of the health workers is also delayed, said the AHW. “Our hazard pay worth P2,000 ($47) has been delayed for three to five months now. These happen ironically, while prices of gasoline, basic commodities, and basic utilities are soaring. And at this time of the year when we are being confronted by the enrollment expenses of our children.”

The AHW demands the full implementation of their hard-won benefits as stipulated in the Magna Carta of Public Health Workers. “We demand that our benefits be funded by the national government instead of sourcing from agency savings.”

The AHW stressed, “This is never the intent of the Magna Carta of Public Health Workers which is aimed at ‘improving the social and economic well-being of health workers, living and working conditions and terms of employment.’”

Health workers are also criticizing the Public-Private Partnership projects of the government, which are making the costs of medical treatment unaffordable for poor patients. The Faculty Medical Arts Building (FMB) of the Philippine General Hospital (PGH) for one is a private clinic of doctors in the country’s premium public hospital.

The FMAB, said Santos, is competing against PGH’s pharmacy and services. “Patients are forced to pay for costly medical treatment because they would rather go to FMAB than to wait in the long line of the out-patient department of PGH,” said Benjie Santos, president of All UP Workers Union-Manila.

Mark Defensor, vice president of the employees union of Philippine Heart Center said privatization is killing patients. “The government’s cut in the budget of public hospitals paves the way to privatization of health services. At the Philippine Heart Center out patient department, blue babies are waiting in line from 4:00 a.m.. They will be old by the time it is their turn to be called by the doctor,” Defensor quipped.

“That’s how important the service of the Philippine Heart Center for these babies is. But the government is not prioritizing health services, thus, they are passing its obligation to give primary health care to the private sector. And for what? To generate income that only they will benefit from,” he added. 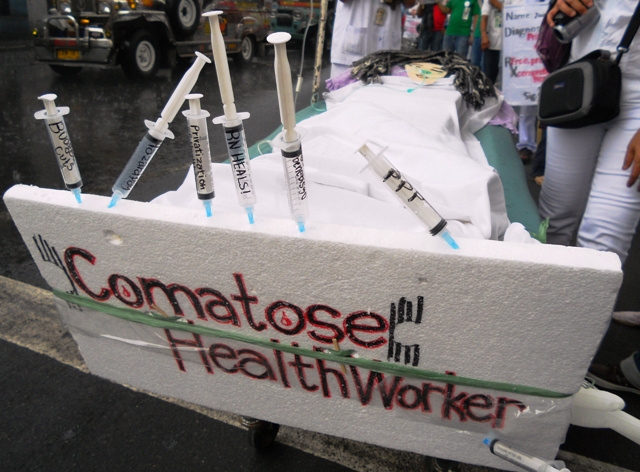 “If a patient has a kidney problem he or she should first pay P18,000 ($428) before he or she will be given dialysis. He could die before he is able to raise that big amount of money. We could give the best nursing care but if there is not enough budget, these poor people would still die,” said Defensor.

Meanwhile, according to the AHW representatives, the Asian Development Bank (ADB) is already eyeing the Research Institute for Tropical Medicine (RITM) for privatization. “One week before the ADB’s annual meeting, representatives from the ADB already took some footages of the hospital,” one employee of the RITM told Bulatlat.com.

“We demand a stop to privatization of public health services, in the form of Public-Private Partnerships and the outright sale of the National Center for Mental Health, Tondo Medical Center and Amang Rodriguez Memorial Medical Center,” the AHW said.

The Welfareville in Mandaluyong City where National Center for Mental Health is located is also up for privatization. The public bidding of Welfareville will start on July this year.
Health workers also opposing Sen. Franklin Drilon’s Senate Bill 3130, which provides for the corporatization of 26 public hospitals.

“Privatization has long been pushed by different administrations but health workers have been strongly fighting against it,” Dr. Geneve Rivera, secretary general of Health Alliance for Democracy (Head) said.

“The government is passing its obligation to the private sector to reduce its social spending. The private sector is slowly entering public hospitals by putting private laboratories, x-ray, and private buildings that can be rented. Even parking spaces in hospitals are not for free,” Rivera said.

As the government is continuously pushing for the privatization of public hospitals, said Rivera, the health workers would continue fighting for the people’s right to free and quality health care.