Iggy Rodriguez, the artist as a conscious political being

Currently the coordinator for the Makabayan coalition of political parties and its chapter in the National Capital Region (NCR), Rodriquez is also a core group member of the Tutok Karapatan Artists’ Initiatives and the well-known group that makes the impressive effigies that are burned during important political protests the UGAT Lahi Artist Collective. His work in these organizations are considerable, but he manages to juggle his workload through discipline.

Discipline is a crucial thing with Rodriguez. Born Raoul Ignacio Mallillin Rodriguez in Zamboanga, the 37-year old artist was not “born” with the innate ability to draw or paint.

“It was something I willed myself to do,” he explained.

In grade school, he watched classmates and friends draw images in their notebooks, and while he himself was not inclined to draw at that time, he liked the idea.

“I liked the idea of creating images, of copying ones that I liked. I found it interesting. I didn’t do it myself, but I liked seeing the work of others,” he said.

His elder brother often brought home comic books (“Marvel Comics, Heavy Metal, that sort of thing”) and he was amazed at what he saw.

“It was like seeing the world interpreted in a different way. The way the characters were drawn, the scenery, the entire conceptualization and consequent rendering. Before then I didn’t know that there was such a way to depict the world,” he shared.

The beginning of his journey as an artist officially began, however, when he was forced to stay in the library one afternoon in high school. Rodriguez can’t recall the exact circumstances that led to his afternoon detention in the library (“Maybe it was raining, I don’t remember), but he will never forget the artist that first inspired him to try to be one himself. He found a book on Pablo Picasso and his work during his so-named Blue Period. 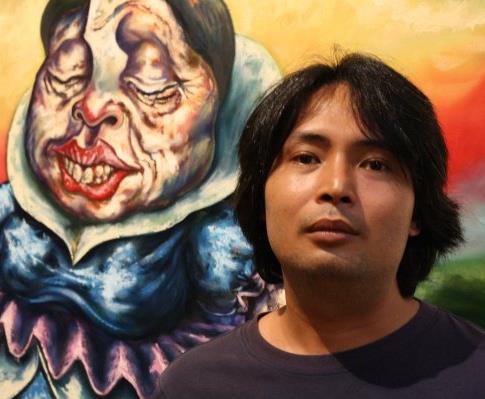 Picasso’s Blue Period refers to the time between 1901 and 1904, when the Italian artist created essentially monochromatic paintings using the colors blue and blue-green. He made his paintings at a time in his life when he was depressed over the death of a friend and retreated from society. The paintings themselves evoke feelings of sadness, loneliness and a lack of hope.

“I was affected by the images themselves and how they were rendered. I was only a high school student, but I’d already heard of Picasso even then. That afternoon was the first time I’d really looked — I mean looked– at his work and I told myself that I would work hard to be a painter, an artist myself,” he said.

Rodriquez has no qualms about admitting that he only learned to draw and paint in college at the University of Sto. Tomas where he took a course in fine arts and advertising. He said whatever talent he has, he cultivated and honed it by studying and constant practice. He literally taught himself to draw, pushing and goading himself until wielding a pen or a paintbrush became second nature to him.

“Many artists are said to be innately talented and that they are able to create merely from sheer inspiration, goaded by a muse of their own making. I didn’t start off like that, and up to now I cannot say that I need to be inspired to create. My own process of creating art always starts with me confronting myself with the necessity to create: tired or not, inspired or not, I need to be always practicing my craft and I want to be always learning ways to improve it,” he said. His right index finger has a rough callus, a testament to his daily routine of drawing at least one hour a day and more on days when his schedule permits.

Rodriguez somewhat shatters the stereotype of artists who are often lost in their own worlds and apathetic to what the world at large thinks or says about their work. He carries defined political stands and is always willing and prepared to discuss and even debate about what art means and the role of artists in the general scheme of things.

“I suppose my approach to art is always practical. I want everything I create to say something, to mean something, and my own views about society and what happens in it are reflected in my drawings and paintings. Some of my work carry obvious message about the struggle against poverty and exploitation; others are more subtle and less overt. In either case, I stand behind my work and if asked, I am willing to explain what they mean. Of course this doesn’t mean that the people who look at my work have it wrong when they see something different in it; all I mean is that as the creator of the piece — be it a drawing, a painting, an installation piece or sculpture – I had real reasons for putting it together the way I did,” he explained.

Artists in the social movement for change

Rodriguez said it is his involvement in social and political movements for genuine change that keeps him and his work grounded. He is empathic in saying that for him, art should “advocate and educate.” He takes part in rallies, attends symposia, and helps organize urban poor communities. One of his dreams is the creation of an arts center for patriotic and liberative culture and arts complete with galleries, a studio, theater and an editing room for videos and music. 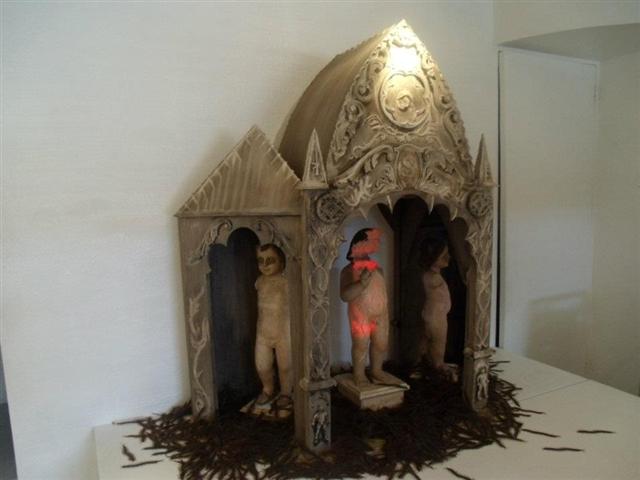 “The artist cannot remove himself from society or divorce himself from what’s happening around him. Given this, it’s important that he should also take part in whatever efforts are being done to fight against all that’s unjust and inhumane. Otherwise his art would be empty statements, decorative objects devoid of meaning. Then again, it also speaks about what kind of values the artist has and what he believes in; if he carries no clear-cut convictions, then his art would reflect that,” he said, then hastened to add, ” but then again each person and each artist is different.”