What Aquino calls as “new juncture” in Philippine relations with the US seems to revolve chiefly on the Philippine role in maintaining the Pacific as an American Lake.

MANILA – While President Benigno “Noynoy” Aquino III was in the United States for a state visit, progressive groups in the US and in the Philippines held protest actions to condemn what they call as his “treachery” and “shameless puppetry.”

“In a time when the Philippines should have been asserting its sovereignty and charting an independent foreign policy, Aquino is groveling to the US for economic and military aid in exchange for the transformation of the entire country into a US military outpost in Southeast Asia,” said Renato Reyes, secretary general of Bayan.

At a protest rally in front of the US Embassy in Manila on June 8, Reyes said there is nothing to be proud of in Aquino’s visit to the US and talks with US President Barack Obama, “because it’s not a talk between friends.” He added that a “real friend doesn’t use or take advantage of his friend, like what the US has been doing to its ‘treaty partner,’ the Philippines.”

The protesters burned an image of the United States flag with pictures of Obama and Aquino. Due to demands from protesters and the media covering the rally, the group burned another Obama-Aquino poster before voluntarily marching away from the US embassy after holding a program.

Philippines as US outpost in Asia-Pacific

On his three-day visit in the US, Aquino had a one-on-one talk with US President Barack Obama in the White House, lunch with US State Secretary Hillary Clinton in the State Department and a meeting with US Senator Richard Lugar. The latter authored a resolution calling for increased defense and security cooperation with the Philippines. It was unanimously approved in the US Senate in time for Aquino’s state visit. 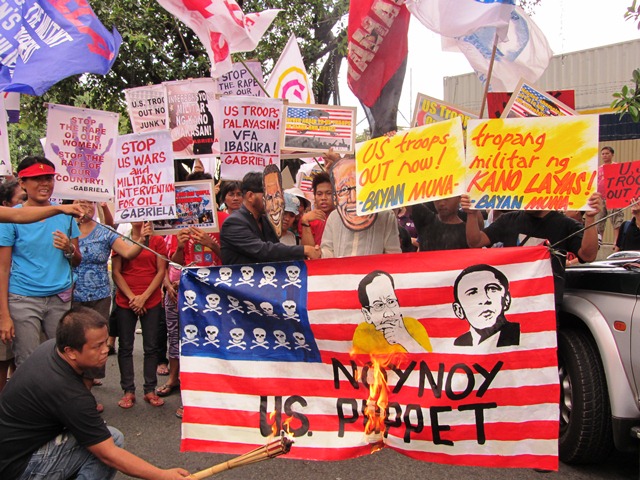 One of the emblems of US-Phl special relations burned in front of US Embassy in Manila June 8. (Photo by Marya Salamat / bulatlat.com)

In a statement, the Communist Party of the Philippines (CPP) described the official visit accorded by the Obama government to Aquino as “a reward for his close cooperation with the US imperialists to help fortify its power in the Asia-Pacific region at the expense of the Filipino people’s sovereignty and its right to self-determination.”

Indeed, the Philippine government under Aquino has agreed to ‘cooperate’ with the US on its “rebalancing” or greater focusing of forces and engagement to Asia-Pacific region, under which by 2020 American military officials say they shall have deployed in the region three-fifths of its fleet. In various top-level talks with American government this year, the Aquino government has agreed to host, even invited, the US’ increased “rotational” troops, along with its “most advanced ship, fifth generation aircraft, and the best missile defense technology,” as Gen. Martin Dempsey, chair of Joint Chiefs of Staff, described their presence.

The enhanced arrangements further tying the Philippine economy and military to that of the US constitute what Aquino himself described as ‘a new juncture’ in US-Philippines relations. This time, according to the White House, the US military cooperation in the Philippines will go beyond the decade-long counter-terrorism that involves hundreds of American troops in the South (From 600 to 1,000 at any given time, based on reports).

The security and military cooperation with the Philippines, Obama said after his one-on-one talk with Aquino, “is a reminder to everybody that the US considers itself, and is, a Pacific power.”

Obama and Aquino discussed not only economic and military issues but also regional issues. As example, Obama himself cited efforts to make sure there is “a strong set of international norms and rules governing maritime disputes in the region,” an indirect reference, or warning, to China’s increased naval presence in the disputed South China Sea (or West Philippine Sea).

In the Philippines, the use of Philippine’s territorial claims against that of China in justifying increased US deployments has been viewed with suspicion, especially since critics said the Aquino government could have resorted to diplomatic means and multilateral alliances from the start. “To justify the increased presence of American troops in the Philippines, Aquino has played his part well in whipping up tensions in the South China Sea through the hoopla on sovereignty over the Spratlys and Scarborough Shoal while invoking the Mutual Defense Treaty of 1951 and seeking US support in the event of armed conflict with China,” the CPP has said in a statement. 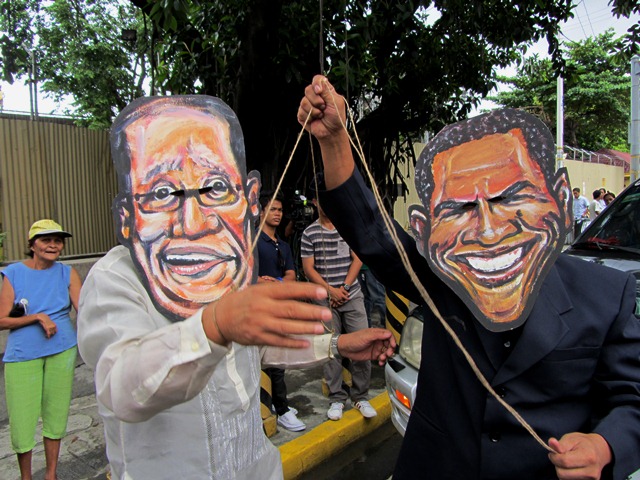 Patriotic protesters demonstrate the nature of US-Phl relations in front of US Embassy in Manila. (Photo by Marya Salamat / bulatlat.com)

What Aquino calls as “new juncture” in Philippine relations with the US revolves chiefly on the Philippine role in maintaining the Pacific as an ‘American Lake.’ Or what the US officials repeatedly claim as “ensuring freedom of navigation, respect for international law, and unimpeded lawful commerce” in the region.

It is a role that apparently necessitates the Philippine military’s transition from just concerning itself with domestic security (fighting off rebellion) to also securing maritime territories (helping US project power in the Pacific). For this role, the US has promised to help Aquino in building a minimum credible defense posture, as evidenced, it said, in the American government’s transfer of their “second Coast Guard Cutter to the Philippine Navy, support for the Phil.Natl Coast Watch System, and the growing number of bilateral exercises and training programs.”

The Philippines under Aquino is set to serve the US purpose as a “resident power” in the Pacific via an expanded intelligence sharing and coordination on maritime domain issues.

The US, State Sec. Clinton reportedly told Aquino, will support the construction and training of a National Coast Watch Center (NCWC) to help the Philippines monitor its coastline. The US support, she said, will be in the form of intelligence exchanges on maritime domain issues and funding for the construction of the NCWC as well as equipment and training.

Foreign Affairs Sec. Albert del Rosario said the NCWC “will enable us to know what is happening in our maritime territory on a 24-hour basis.” (As an archipelago, the Philippines has a 36,000-km coastline.) This knowledge will then be shared and coordinated with US troops.

Critics said the increased US power projection in the Asia-Pacific is largely guided by its self-interest. “At the core of US military intervention in the Philippines and power-projection in the Asia-Pacific is the aim of further pushing for neo-liberalization policies in the face of the prolonged and continuing capitalist depression,” the CPP said in a statement. It explained that the US “wants to completely do away with the remnants of economic nationalism in the Philippines and other semicolonial countries in order to further push down wages and allow big US companies all-out freedom to exploit labor, extract cheap raw materials and remit superprofits.”

As it is, huge mining and logging interests, including power projects in the Philippines, are reportedly being preceded and secured by the military. Groups opposed to landgrabbing and various modes of implementing privatization and deregulation are often vilified as “terrorists.” Progressive groups opposing neo-liberal policies also get accused of being ‘fronts’ of terrorists and thus they become targets too of military acts of suppression.

The CCP said this US drive for increased deployment in Asia is “summed up in the Trans-Pacific Partnership Program, which the Aquino regime seeks desperately to be part of even at the expense of amending the Philippine constitution and doing away with the provisions pertaining to the protection of the national patrimony.”

The revolutionary group charged that even now, “Aquino’s retinue of puppets and Amboy officials are working surreptitiously to transform the Philippine congress into a constitutional assembly for this purpose.”

While Obama is thanking Aquino for what he called “excellent cooperation” on economic, defense and other issues, in the Philippines, Aquino was denounced as “a traitor to the Filipino people and to their historic struggle and aspirations for genuine national freedom.”