Aside from allowing the US armed forces access to their former military bases, the Aquino government “allows the US FBI to interrogate prisoners in Camp Crame and use its custodial center in keeping foreign nationals it suspects of being “terrorists.”

As the Aquino regime “continues to allow the US military to increasingly intervene and operate within the Philippines, it is bound to be politically and legally confronted by issues of sovereignty,” the Communist Party of the Philippines (CPP) said in a statement. The revolutionary group enumerated various issues where they say the Aquino government has trampled on Philippine sovereignty, in the process violating provisions even of its “own reactionary laws.”

These issues include providing the US warships and submarines with virtual open access to Philippine waters, “without consideration to the policy of freedom from nuclear weapons as provided for in the 1987 reactionary constitution.”

The United States’ advanced warships and submarines are reportedly nuclear-powered. On top of that, these are also widely believed to be armed with and capable of launching nuclear weapons.

The Philippine Constitution, on the other hand, is explicitly against the entry of nuclear weapons. But the Philippine government has little hope of enforcing it if the warships, aircrafts and troops it had invited to enter the Philippines can freely move around with their nuke via the US policy of “neither confirming nor denying” its presence. The CPP is encouraging patriotic Filipinos to continue questioning the said policy.

Another Aquino violation of Philippine sovereignty shows in this government’s “allowing the US armed forces to maintain a military base inside Philippine territory.” According to the CPP, the headquarters of the 700-strong Joint Special Operations Task Force (JSOTF)-Philippines is in an exclusive zone within Camp Navarro, the main camp of the AFP’s Western Command, in Zamboanga City. It is, in fact, the camp first visited by American Gen. Martin Dempsey, chairman of US Joint Chiefs of Staff, when he flew to the country early this month and checked on the AFP’s progress in counterinsurgency operations, for example. 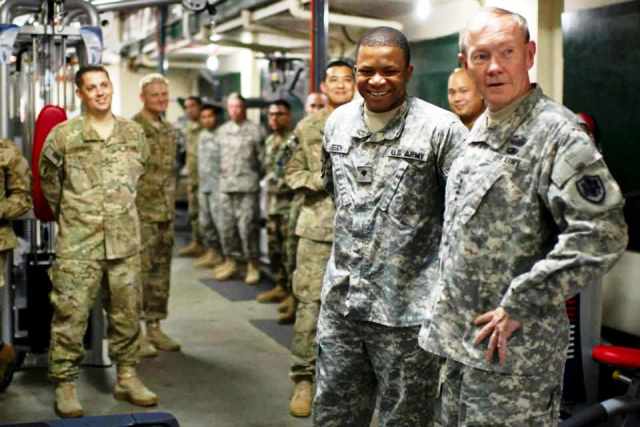 The JSOTF-P headquarters camp, based on various reports and complaints of former soldiers, cannot even be entered into by top generals of the AFP without permission from US officials.

In practice, the JSOTF’s exclusive zone in Zamboanga is a military base, but it apparently exists without an appropriate treaty, violating “requirements set by the 1987 constitution covering foreign military bases, troops and facilities,” the CPP noted.

Aside from the JSOTF headquarters in Zamboanga, the US has been reportedly setting up and operating an intelligence infrastructure in the Philippines. It includes the likes of the mountain-top antennas, among others, which the US has reportedly set up during its “humanitarian missions” and “joint exercises” in the past several years. According to the CPP, these facilities which the US considers as its exclusive domain “are essentially US military facilities,” but where, it asked, is the “relevant agreement or treaty covering such facilities?”

As if these issues were not enough examples yet of the Aquino government’s violations of Philippine laws, allowing a foreign police agency, particularly the New York Police Department (NYPD), to set up a “satellite office” in Philippine territory is also disclosed and condemned by an NDFP peace panel consultant. But even this “satellite office” appears to be just one part of a package of US government agencies and troops setting up offices and stations in the Philippines to carry out intelligence operations within Philippine territory.

In his recent US visit, Aquino has agreed to work with the US military in setting up a land-based radar and coastline watch center to conduct maritime surveillance. Funds for its construction, equipment and for training the Philippine Coast Guard who would eventually operate it (as well as share intelligence and coordinate with US troops) are pledged by the Obama government to Aquino.

Aquino has also reportedly given his open support to the US, allowing it to operate its surveillance drones within Philippine air space. The revolutionary group warned Filipinos that such operations “will further enable the US government to influence Philippine policy-making and legislation and influence or manipulate political exercises such as elections.”

Intelligence operations of the US constitute outright military intervention and can be confronted by Filipino patriots as violative of Philippine sovereignty, the CPP said. Past reports have hinted at numerous counts of US troops’ participation in local combat operations launched by the Armed Forces of the Philippines. In a hearing early this year in Congress on calls to review the Visiting Forces Agreement, the Philippine military leaders themselves disclosed that the US support in providing intelligence have helped the government troops conduct “successful operations.”

“The Aquino regime allows the US to influence AFP operations both at the strategic and tactical levels,” the CPP said.

Unfortunately, the US hand in local conflict does not seem to be its sole purpose in setting up bases and offices in Philippine territory. It appears that the US government is also using the country both as its outpost in Asia-Pacific and, according to Alan Jazmines, detained consultant of the National Democratic Front peace panel, also as a place “for the rendition of several foreign nationals.”

Rendition (according to New Oxford American Dictionary) is “a practice of sending a foreign criminal or terrorist suspect covertly to be interrogated in a country with less rigorous regulations for the humane treatment of prisoners.

In a letter last April to the Commission on Human Rights, the Department of Justice, the Karapatan Alliance for the Advancement of People’s Rights and other legal and human rights organizations, political prisoner Alan Jazmines and fellow detainees revealed that agents of the American FBI and other intelligence agencies of the US have been allowed to interrogate political prisoners detained at the PNP Custodial Center at Camp Crame. Jazmines alleged that the FBI is maintaining an office inside the detention center itself and a unit in a nearby condominium.

In their letter, Jazmines and his fellow detainees shared the condition of political prisoners at Camp Crame and exposed that at least three Indonesian nationals who were arrested in Malaysia and Indonesia have been “renditioned and detained at the prison facility at the behest of the US government.” The Filipino political prisoners alleged that these Asian prisoners were given false Filipino identities to “legalize” their incarceration. They noted that the US government has similarly arrested and imprisoned foreign nationals at the infamous Guantanamo Bay prison facility of the US military in Cuba.

“The ongoing operations of the FBI in the Philippines dovetails with the planned setup of a satellite office of the New York Police Department (NYPD) within the national headquarters of the Philippine National Police,” said the CPP in another statement. When pieced together, “All these form part of the heightening interventionism of the US government, its military, police and intelligence agencies inside the Philippines,” the CPP concluded.

The CPP surmised that “Benigno Aquino III is bound to surpass his mother Corazon who in 1991, as Philippine president, marched on the streets of Manila to call for the extension of the Military Bases Agreement with the US.”