The Philippines is still a debtor nation, and as Ibon Foundation said, this ‘lending’ to the IMF used to be a sensibly un-hyped part of “management of any country’s international reserves.”

MANILA –Various groups came close to questioning the sanity of the Aquino government when it boasted recently that the Philippines is now a “creditor nation,” after it pledged one billion US dollars to the International Monetary Fund’s bailout kitty.

While some Filipinos commented in social networking sites that they fancy and they feel proud of the seeming turn-around —the Philippines had often been called a basket case or laggard compared to its neighbors—the billion dollar pledge still did not change the economic standing of the Philippines. Or even put it on the road to desired change. According to independent think-tank Ibon Foundation, the Philippines remains a debtor nation to the tune of US$62.9 billion as of March 2012, or US$79.1 billion if other debts monitored by the Bangko Sentral ng Pilipinas (BSP) but relegated to a footnote are included. 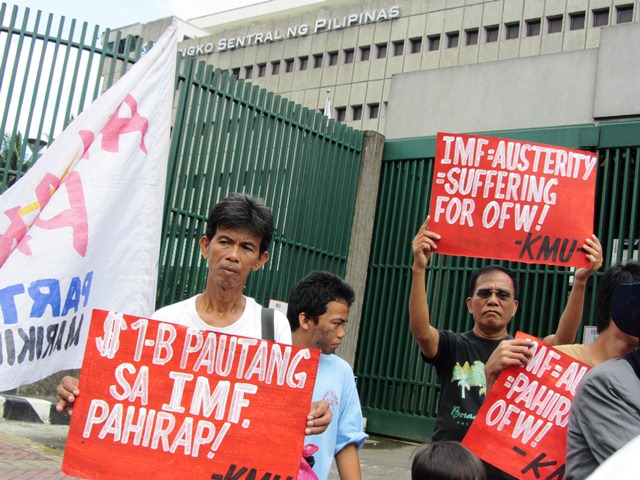 Members of KMU and Piston hold picket in front of BSP Jun 25 to protest Aquino’s “pledge” to IMF and austerity measures.(Photo by Marya Salamat / bulatlat.com)

Although the Philippines stopped being a net borrower from the IMF in 2006, it still has US$11.7 billion in multilateral debt including US$3.3 billion to the World Bank (WB) and US$6.0 billion to the Asian Development Bank (ADB), Ibon said.

Statements of various progressive groups also condemned the Aquino government’s latest act for the IMF as proof that this government will not only injure but also insult Filipinos. Showing the latest strain of what the youth has scorned early this year as “Noynoying” (pretending to be busy while really doing nothing), Aquino is perceived today as already into a public relations campaign in the build-up to the next State of the Nation Address (SONA) at the end of July, with his campaign resting on just giving impressions and signals of something good happening or being done, such as in the economy.

The Aquino government may have wanted to give the impression that the Philippines is now able to lend the IMF US$1 billion because of its sound management of government finances and of the economy, Ibon said in a statement. But the international reserves are not really funds that the government has earned and can lend or spend in the same way as, for example, its projected Php1.6 trillion (US$37.5b) in revenues for 2012, Ibon explained. The international reserves, it reminded Aquino, are foreign exchange assets accumulated by the economy from various foreign exchange inflows, but which are not like money held by the treasury.

Data gathered by Ibon showed that the Philippines has actually been lending to the IMF for decades now with an interest-earning reserve position that, for example, rose from US$113.4 million in 2000 to US$516.83 in May 2012. There has likewise been billions of dollars in other lending to foreign entities. The BSP has long had interest-earning deposits in foreign banks and held interest-earning foreign securities including from the United States (US). This lending rose from US$12.4 billion in 2000 to US$64.1 billion in May 2012. 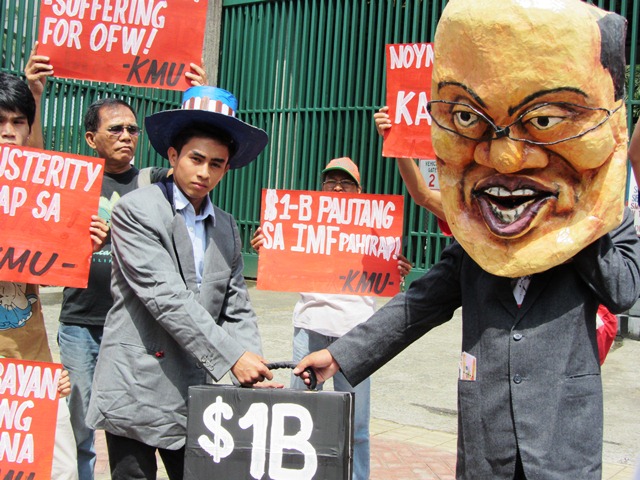 “These have sensibly not been played up in the past because such ‘lending’ of foreign exchange is normal occurrences in the management of any country’s international reserves and are not equivalent to lending of surplus government cash,” said Sonny Africa, executive director of Ibon Foundation.

The group believes the recent hype about “creditor nation” status is just “part of a public relations campaign of a supposedly improving economy in the build-up to the next SONA.

“The loan is very insulting to workers who have endlessly asked for a P125 wage increase that Aquino has repeatedly rejected. It is an affront to the poor who can barely make both ends meet. It is the height of insensitivity when, in the face of majority of poor Filipinos who are in dire need of affordable and even free basic social services, the Aquino administration continues to renege on its constitutionally-mandated responsibility to deliver quality social services,” said Gabriela Women Partylist (GWP) Rep. Emmi De Jesus.

The one-billion dollar Aquino hyped pledge underscored his penchant for chest-thumping positive signals that fail to hide ugly truths. According to the Gabriela solon, the Aquino government should “stop sending signals that our economy is robust when in reality, our poor do not have livable wages and adequate housing, and they could barely feed their family, send their children to school, and prevent the untimely death from preventable diseases of increasing number of mothers and infants.”

To Filipinos suffering from “decaying public health and education services as a result of the Aquino regime’s budget cuts on social spending,” Aquino’s one-billion dollar pledge to the IMF is “a slap on the Filipino people’s face,” the Communist Party of the Philippines said in a statement.

The revolutionary group reminded Aquino that “Debt servicing continues to eat up the largest portion of the Philippines’ financial resources.” Last year, the Philippine government used up as much as PhP357.1 billion ($83.8b) on debt service or nearly 30% of the PhP1.2 trillion ($28.2b) 2011 budget. In comparison, the Aquino regime only allocated a little more than P170 billion ($3.99m) for education and around P40 billion (US$938m) for health.

According to Ibon, more than Php5.1 trillion (US$119.7b) national government debt (of which almost half are foreign debt) explains why debt service is chronically the single largest expense of the government, for instance reaching Php738.6 billion (US$ 17.33b) in interest and principal payments just in 2012.

Not for people’s benefit

The IMF has continuously given assistance to financially distressed countries amid a protracted global depression. In exchange, it has required the implementation of different austerity measures. “This has consequently led people of different nations to suffer from austerity programs resulting to unemployment, meager wages, and higher costs of living,” said Fortunato Magtanggol, spokesman of Revolutionary Council of Trade Unions-Southern Tagalog.

It is also for this reason that critics of Aquino’s IMF pledge have lashed out even more at Aquino’s announcement.

“The Aquino government is making a pro-imperialist lie in saying that the IMF is helping countries cope with the crisis,” said Leandro “Doods” Gerodias, deputy secretary general of Kilusang Mayo Uno (KMU) in a picket in front of the Bangko Sentral ng Pilipinas (BSP) office early this week. The labor leader said “the workers and peoples of Europe and the world are in fact up in arms against the IMF and its austerity measures.”

Members of KMU protested before the BSP because they said they cannot sit back and relax as the Aquino government is following the IMF dictates and using the foreign exchange sent in by Overseas Filipino Workers (OFWs) against fellow workers and poor people in other countries.

KMU told Aquino his government should find other ways of using the country’s foreign reserves “in ways that actually benefit OFWs and Filipino workers. Lending it to the IMF will harm rather than help the overseas and domestic Filipino workers.”