You Are Here: Home → 2012 → July → 10 → ‘After all the antics, Aquino’s Mining EO blazes trail for further plunder of Philippine resources’ – environmentalists → Page 2

‘After all the antics, Aquino’s Mining EO blazes trail for further plunder of Philippine resources’ – environmentalists

President Aquino himself has delayed the signing of the mining EO time and again reportedly for its problematic language. But based on Kalikasan PNE’s study of the said EO, “Aquino’s latest rhetoric seems to have not changed at all.”

“For all the hoopla surrounding this EO, it is still a reaffirmation of the plunder being perpetuated by the Mining Act of 1995, which groups have blamed for large-scale and destructive mining all over the country,” said Bayan secretary general Renato Reyes Jr.

“The provisions of this impending EO are just more of the same old policies formed in the image of the Mining Act of 1995,” the Alliance of Concerned Teachers said in another statement. The teachers’ group said that as long as this national law is in place, companies are still allowed to repatriate up to 100-percent of their invested capital prior to taxation; imposed excise taxes are still at a very low 2-percent, and corporations are still granted various anti-environment, anti-people concessions such as timber rights, water rights, easement rights and access to private land and concession areas.

Aquino’s recently signed mining EO has provisions “completely disenfranchising legitimate small-scale miners particularly in Nickel operations,” Kalikasan PNE said in a statement. This is like cracking down on the subsistence small-scale miners in favor of foreign and large-scale mining operations, said Bayan. It also said the EO has validated all existing mining contracts, agreements and concessions prior to its signing.

According to Bayan, Aquino’s EO also has a provision stating that no new mineral agreements will be entered into pending legislation, but, at the same time, it is allowing mineral exploration to take place. Those granted exploration permits shall be given the rights or first option to utilize the minerals in the area. 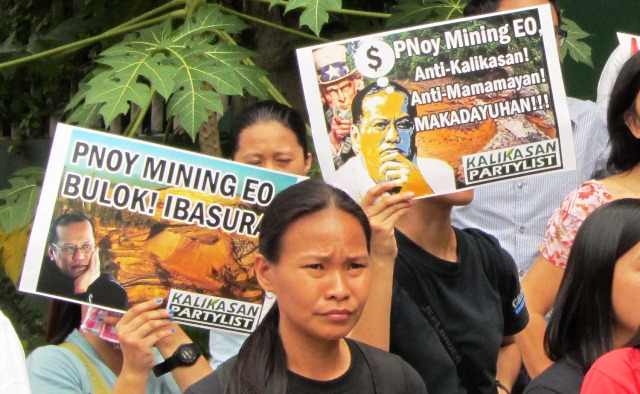 Members of indigenous peoples group worried about the renewed, intensified onslaught of mining companies into their ancestral domain. (Photo by Marya Salamat / bulatlat.com)

After Aquino signed such an EO further liberalizing mining operations in the country, protesters observed that large mining firms are now “scrambling to exploit more areas.” Foreign-owned Sagitarrius Mines Inc., for example, is already asking Malacañang to overturn the DENR’s rejection of its permit. The said company has long been working also to challenge the opposition of the locals to their operations. If it got what it wants from Malacañang, it would gain the freedom “to exploit the largest copper-gold reserve in Southeast Asia spanning 10,000 hectares in the four agricultural and fisheries provinces of South Cotabato, Sultan Kudarat, Davao del Sur and Sarangani,” Quimpo said.

“In exchange for a few concessions and government shares, the EO will allow corporations more unhampered access to the country’s vast mineral wealth. It will allow the wholesale export of finite supplies of minerals that could have otherwise been used for building national industries,” Frances Quimpo of Kalikasan Partylist said.

Given Aquino’s liberalizing EO on mining, protesters appealed to the public to “continue defending our land, life and environment from the mining plunderers.”

“Aquino’s EO proves that the government still misses the point on what really ails the mining industry at the core,” Clemente of Kalikasan PNE said. In fact, the government not only misses the point, it apparently uses force to contain the anti-mining sentiments. According to Kalikasan-PNE, 17 environmentalists had been killed under the Aquino administration, including Willem Geertman, a Dutch development worker who was killed recently, and Fr. Fausto “Pops” Tentorio, a PIME missionary who was killed in October 2011.

Kalikasan PNE airs again the necessity of replacing the mining law with stringent policies on environmental regulation, greater state role and advancement of the people’s welfare, “as espoused in the People’s Mining Bill already pending in Congress.”

The Peoples’ Mining Bill is a progressive legislation on mining that calls for reorienting the mining industry toward local industrialization and development while putting a prime on the environment and people’s welfare. It is currently consolidated with other mining bills into the 2012 Philippine Mineral Resources Act.