“Under the guise of counter-terrorism, the people of Mindanao are being held hostage by business interests. Communities who defy military presence are tagged as terrorist havens, its residents as supporters.” – Kawagib 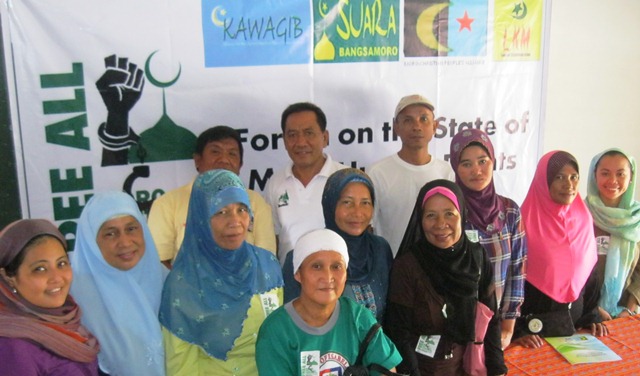 Kawagib members in Basilan on the 11th year of Philippine government crackdown on Moro communities. (Photo courtesy of Kawagib / bulatlat.com)

Kawagib, along with the Moro-Christian Peoples’ Alliance and Katribu Partylist, also marked with a protest rally, Friday July 13, the 11th year of the “State of Lawlessness and Military Crackdown in Basilan, Sulu and Zamboanga.”

“Under the guise of counter-terrorism, the people of Mindanao are being held hostage by business interests. Communities who defy military presence are tagged as terrorist havens, its residents as supporters. Communities are bombed and residents displaced purportedly to wipe out terrorists in the area,” Kawagib said. The group recalled that since 2001, more than 200 Moros have been arrested and detained – accused as Abu Sayyaf members.

In a related development, more Philippine soldiers are being deployed to Mindanao today, especially in Basilan in the light of renewed “terrorism” in the province, according to the
Armed Forces of the Philippines.

The Abu Sayyaf group, which the Philippine military also links to the international terrorist group Al-Qaeda, one of the supposed enemies in the United States’ borderless ‘war on terrorism,’ is lately being accused by the military as behind armed attacks in Basilan. These attacks had victimized more civilian Moros than soldiers and paramilitary troops.

Based on the report of the military’s Special Operations Task Force Basilan led by Col. Ramon Yogyog, the most recent Abu Sayaff attack involved armed groups aboard two yellow motorized boats who fired at a ferryboat in Basilan. The ferryboat came from Zamboanga City with 400 passengers. The police said they were headed to Tabuan Lasa to register as voters with the Comelec. The ferryboat is owned by a Moro. Injured in the shooting attributed by the military to the Abu Sayyaf are also Moros: Nurhiba Ahamad, 46, died, Hadja Patricia Kadil, 46 and Awina Ahamad, 35.

Last week, July 10, six people were killed and 22 others were wounded in an ambush attributed by the military to “Abu Sayyaf bandits” in Sumisip town, Basilan province. Col. Arthur Ang, commander of the Philippine Army’s 104th Brigade, told the media that five of the victims were rubber ‘tappers’ of the Tumahubong Agrarian Reform Beneficiaries Integrated Development Cooperative (TARBIDC). The other fatality was a member of the Special Citizens Armed Forces Geographical Unit Active Auxiliary (SCAA) assigned to escort the rubber plantation workers.

Basilan has been a major rubber producer in the country. Rubber plantations here used to be controlled by American companies until the Moro revolt in the 70s closed down some companies. Today the province is said to be staging a comeback, with 15 largest rubber plantations under the government’s agrarian reform showcases called ARCs (agrarian reform communities), which, though owned by farmer cooperatives, are also watched over by government soldiers and/or paramilitary troops.

Because of the reported attacks in Basilan, more government soldiers are coming into the area now as part of its “anti-terrorism” drive. The Philippine Army is coordinating with the police and has deployed three companies of troops “in the pursuit operation against last Wednesday’s ambushers,” said Army spokesperson Maj. Cabunoc. They also sent troops to pursue the armed group that their elite forces encountered last Sunday. Cabunoc also said the army is maintaining its presence in the Basilan Circumferential Road.

The newest US fusion center, launched last year by US Ambassador Harry Thomas, is located at the headquarters of the Philippine military’s Western Mindanao Command (Wesmincom) in Zamboanga City.

Who is messing with whom? 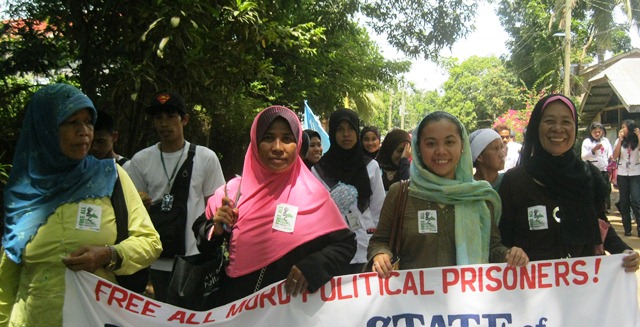 As Mindanao gets divided up by huge foreign corporations doing mining and logging operations or expanding their plantations, the Moros, ordinary settlers, peasants and indigenous groups are seemingly left to defend their land while some resort to infighting for scraps. Poverty worsens and with it, security. Kawagib said the ARMM “has the highest cost of living (more than PhP1,287 or US$30.75) among all regions in the Philippines, but they only get PhP232 (US$5.54) minimum wage (18 percent of the cost of living).” The group also noted that despite Mindanao’s wealth, the country’s three poorest regions are in Mindanao.

Kawagib criticized the Aquino government, which, they said, has not reviewed nor taken back the security policies that discriminate against Moro people, or put a stop to militarization and bombardment of Moro communities. Instead, Aquino has called for an “All-Out Justice,” which, Kawagib said, only intensifies human rights violations in Moro areas. The deployment of troops for “pursuit operations” falls under Aquino’s ‘all-out justice.’

The Moro human rights group called on the public and their fellow Moros to “expose the true situation of our communities and oppose state policies that continue to violate and deny our rights.”