“Forty is not just a number to remember but a reminder of the length of time we have been fighting impunity and for the attainment of justice. “ – Marie Hilao-Enriquez, Karapatan

MANILA – Tears welled up in the eyes of Clarita Sanchez when she recalled how her son died 27 years ago.

The 73-year-old woman said her son, Sentano, was one of the two who were killed when elements of the Philippine Marines demolished their shanties in Tatalon village in Quezon City on July 31, 1985. Sentano was only 17. The other victim, Mary Grace Cruz, was 12.

“There were many of them (Marines), armed with high-powered guns. They fired shots,” she recalled. “Remembering what happened is still painful.”

Sanchez joined martial law activists in a protest rally at the Chino Roces (formerly Mendiola) bridge. “I still hope I can attain justice,” she said.

“We take on Mendiola once again just like 40 years ago so that the son of Ninoy and Cory Aquino would hear and know that we are still here and that 40 is not just a number to remember but a reminder of the length of time we have been fighting impunity and for the attainment of justice, “ Marie Hilao-Enriquez, chairwoman of Samahan ng mga Ex-Detainees Laban sa Detensyon at Aresto (Selda), said.

It has been 40 years since the late president Ferdinand Marcos placed the entire country under martial law and 26 years after the former dictator was toppled through a popular uprising.

Carlos Salvador also sees no fundamental change since then. 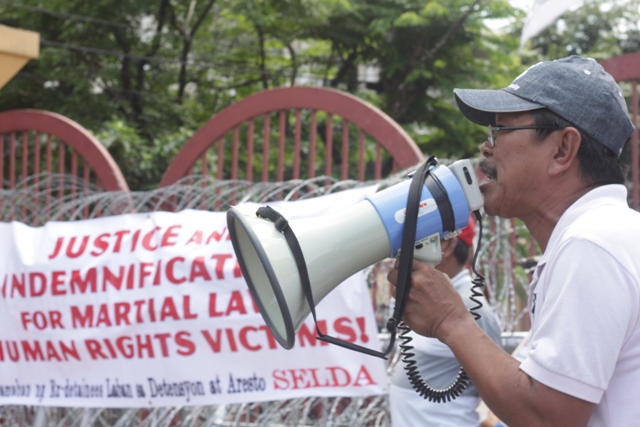 Carlos Salvador slams the continuing inaction of the Aquino administration to render justice for victims of martial law in a rally Sept. 3.(Photo by Ronalyn V. Olea/ bulatlat.com)

Salvador and his wife, Selma, were members of Kabataang Makabayan (KM) when martial law was declared. Both of them were imprisoned. Salvador spent two years at Camp Crame and Fort Bonifacio detention facilities.

Like many political detainees, Salvador, now 62, was tortured by his military captors. He is among the 9, 539 victims who filed a class action suit against Marcos. In its final ruling in September 1992, the Hawaii court ordered the Marcos family to pay $776 million in damages to the victims.

The bill seeking to provide compensation to the victims of martial law remains pending. The Senate Committee on Human Rights reported that it is still completing the signatories to the bill before bringing it to the plenary for voting.

“Our senators should remember that they owe us a law that should have been implemented by now. What are they waiting for, another 40 years?” Trinidad Herrera, a board member of Selda said in a statement.

The bill was first filed in 1997. It has never been signed into law even as President Aquino talks about being a victim of martial law, Selda said. Five Congresses have come and gone and still, the bill remains pending.

In his inaugural address, Aquino said, “To those who are talking about reconciliation, if they mean that they would like us to simply forget about the wrongs that they have committed in the past, we have this to say: there can be no reconciliation without justice.”

In his 2011 State of the Nation Address, Aquino, son of former political prisoner Benigno Jr. who was commonly known as Ninoy, promised to provide compensation for victims of martial law. His words, however, were not matched by action.

Selda also lambasted Aquino administration’s negligence that resulted to unmonitored withdrawals from Imelda Marcos’ account at the Philippine Veterans Bank. The P36.55 million ($870 thousand) Marcos ill-gotten money under Imelda Marcos’ name is now only a little over P1 million ($23.a8 thousand) despite the garnishment order by the Sandiganbayan. Earlier in August, the martial law victims suffered another setback after the Singapore Court ruled to award the $23 million Marcos ill-gotten wealth to the Lucio Tan-led Philippine National Bank. Tan is a known Marcos crony.

“After overthrowing Marcos, we filed and won the now historic Hawaii class suit for victims of martial law” Enriquez said, “But even under the present ‘matuwid na daan’ (righteous path) of Noynoy Aquino, we continue to suffer from injustice.”

“The policies have remained the same, be it in the economy or military affairs. The same political clans are in power. It’s the same,” Salvador said.

The Marcoses themselves are back in power. Ferdinand Jr. or Bongbong Marcos is senator and Imee is governor of Ilocos Norte.

“The only difference is that during martial law, people know the dangers. It is more difficult this time because the people are made to believe that there is democracy but state terror still reigns,” the martial law activist said.