The Pagkakaisa ng mga Samahan ng Tsuper at Operators Nationwide (Piston) and the Kilusang Mayo Uno (KMU) is accusing the Armed Forces of the Philippines (AFP) and its paramilitary elements of killing a Piston leader in Pampanga Ponciano ” Poncing” Infante.

In a statement, Piston president George San Mateo said Infante was killed 5:30 p.m. on September 3 by two unknown men riding a motorcycle. Infante was at the time taking a nap at the Hausville Jeepney Terminal near the Marque Mall in Angeles City. Infante was also the president of the local transport group PASADA-Angeles City and the Pandan-Angeles Drivers Operators Association.

San Mateo said Pasada has long been an ally of Piston in Angeles City. It is the biggest federation of
jeepney drivers in Angeles City. Under Infante’s leadership, Pasada was always quick to respond to the calls of Piston for unity or protest actions against oil price hikes and the oil deregulation law.

Infante was among the official delegates of Piston-Pampanga in Piston’s fourth national congress held in San Pablo City, Laguna from November 10-12, 2011.

Piston and Pasada’s tight coordination was also behind the successful transport strike in Angeles City and surrounding provinces in March 31, 2011. This was part of the March 31 Nationwide Transport and People’s
Protest vs Oil Overpricing campaign of Piston. 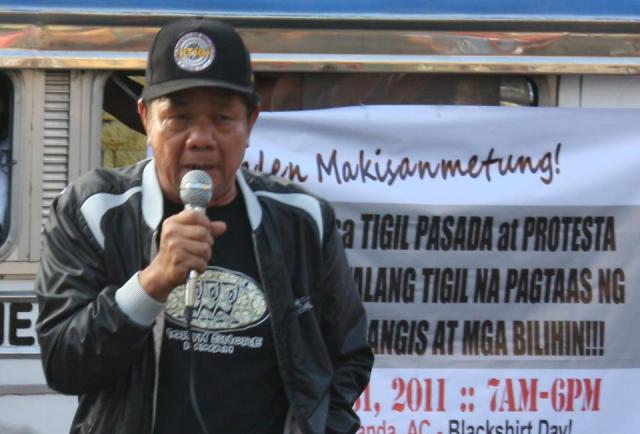 During the same strike, the two transport groups also pushed for the junking of the higher common carrier tax imposed by the Bureau of Internal Revenue Region on jeepney operators in Central Luzon particularly in Pampanga. Because of the successful strike, the BIR Region 3 rolled back the common carrier tax.

“Piston vehemently condemns Ka Poncing’s brutal murder. He was the fourth transport leader killed this year. Last March, armed men killed Felix Cultura in front of the jeepney terminal in Butuan City. He was the leader of the Pederasyon ng Transport group in Butuan City affiliated with Piston-Caraga. Piston-Gasak-Divisoria leader Erning Gulfo was killed last May. Last June 9, Ka Jing, the vice-president of the Divisoria Baclaran Jeepney Operators and Drivers Association (Dibajoda-Piston) was killed in front of their garage in Longos, Bacoor, Cavite,” San Mateo said.

“Progressive transport leaders are also being targeted by the Aquino government’s counter-insurgency plan Oplan Bayanihan. There is no room for doubt that Ka Poncing’s murder should be laid at the door of the Aquino administration,” he said.

“The pattern of extra-judicial killing of activists and critics of the government continue under Aquino. We hold Aquino responsible for the death of Ka Poncing and other Piston leaders and activists who are victims of extra-judicial killings. The Aquino government is not only ignoring drivers’ and people’s clamor against the overpricing being carried out by the oil cartel. It is also attacking militant transport leaders who oppose its collusion with the oil cartel,” he said.

Labog said the government’s response will be predictable: “It will order an investigation into the case. It has buried many cases of extra-judicial killings with such orders. This government merely projected itself as the opposite of the Arroyo government for propaganda purposes, but continues the previous regime’s anti-worker and repressive policies.”