You Are Here: Home → 2012 → September → 12 → Frequent docking of US nuclear-armed ships, submarines fueling tensions in the region

Frequent docking of US nuclear-armed ships, submarines fueling tensions in the region

Last Friday, USS Hawaii, a Virginia class submarine, docked at Subic Bay in what the US embassy in Manila described as another “routine port call and goodwill visit”. It followed the USS Frank Cable, the ‘warship that fixes warships,’ which docked in Subic since September 3.

MANILA – For behaving like a “US doormat consenting to US military and nuclear presence,” as Gabriela Rep. Luzviminda Ilagan described him, Philippine President Benigno ‘Noynoy’ Aquino III’s overtures to meet with Chinese president Hu Jintao on the sidelines of the Asia Pacific Economic Cooperation (Apec) forum in Russia had reportedly been snubbed. Mainstream media said the schedule of the two leaders did not make the meeting possible. But protesters of the increased presence of US troops and materiel in the Philippines pointed to other reasons.

“Aquino failed to talk to the Chinese leader in APEC, even if he had said it was his priority, because Jintao did not face him – he (Aquino) has proven to be a very loyal US ally,” Lengua de Guzman of Bayan said in a protest rally of activist groups near the US embassy in Manila. These groups are questioning the increased docking of US warships in the country.

Aquino’s overtures to meet with Chinese president Hu Jintao was meant to project his administration’s attempt at diplomatically settling its territorial row with China. Progressive activists who have also been pushing the Aquino government to settle the dispute through diplomatic means have blamed the tension with China on the Aquino government’s behavior as a “US lapdog.” In the recent ASEAN meeting, for example, the Philippines has reportedly “soured the mood” with its anti-China pronouncements that echoed more the stance of the US government. 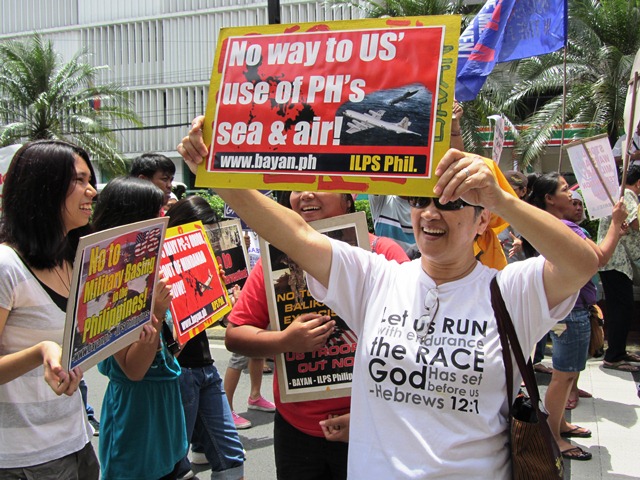 Protesters try to deliver their message to the US embassy (Photo by Marya Salamat / bulatlat.com)

For the defense and security planners of the United States, China is “the elephant in the room,” (or in the Asia-Pacific) that they want to neutralize even before it throws its weight around and starts to ram the US sway in the region. The US military is executing an increased pivot of its forces and war machines toward the region, ostensibly to promote “freedom of navigation” but analysts said it is more for maintaining the Pacific Ocean as “an American lake.”

With the US forces pivoting toward the region, tension here intensifies as China chafes at the military encirclement and citizens from Japan to Korea and the Philippines protest against the increased US military presence. It does not help that the US is seen as further fueling the territorial disputes between Asian countries. It had promised to “stand by” the Philippines as a treaty partner, donating to the Philippines some discarded ships and being present in the seas just when Aquino was at his loudest saber-rattling yet with China.

In the Philippines, the “institutionalization” of increased US military presence followed the Aquino government’s warmongering against Chinese intrusions in the Spratly Islands and Scarborough shoal. Critics condemned Aquino for misrepresenting his government’s puppetry to US as his way of bolstering the Philippine claim on the disputed islands.

After the Aquino government admitted they had “invited” the US earlier this year to use the Philippines as transit points and venues for the US forces’ pivot in the Asia-Pacific, the Aquino government has noticeably toned down its hawkish demeanor with China. After riling China it is saying now that it is pursuing diplomatic means. 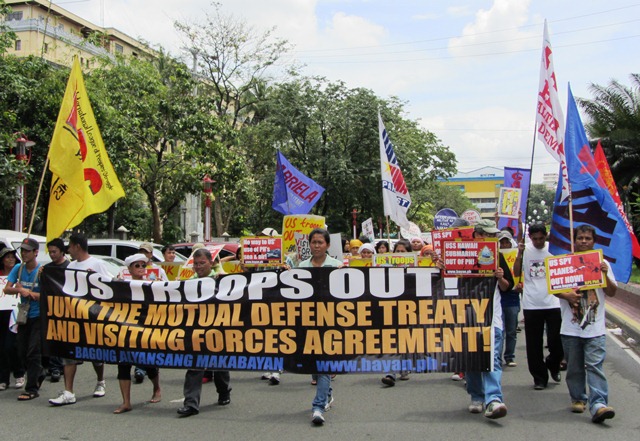 Members of Bayan march toward the US embassy in Manila Sept. 10 (Photo by Marya Salamat / bulatlat.com)

But the increased presence of US troops and war machines continued, angering patriotic Filipinos.

Last Friday, USS Hawaii, a Virginia class submarine, docked at Subic Bay in what the US embassy in Manila described as another “routine port call and goodwill visit”. The Hawaii is said to have the ability to drive itself, auto-stabilize and auto-hover, attack fast yet keep quiet and avoid detection. It followed another American submarine, the USS Frank Cable, a LY Spear class submarine, which docked in Subic since September 3.

As such, there are now two American submarines on a “routine port call” at Subic. Protesters from multisectoral group Bayan suspected, and worried, that these vessels are nuclear-armed. In fact, one of which, the Hawaii, may indeed be nuclear-armed, since a Virginia class submarine is supposed to be a nuclear-powered fast attack submarine by the US Navy. The other, meanwhile, is only capable of repairing and supporting nuclear-armed submarines and surface vessels.

In its website, Frank Cable says it conducts maintenance and support of submarines and surface vessels deployed in the U.S. 7th Fleet area of responsibility. Designed to tend nuclear-powered attack submarines, it was the repair ship for two squadrons of American submarines, and it tended Sturgeon-class attack submarines and Franklin-class ballistic missile submarines. Based on its website, Frank Cable was taken out of the decommissioning process in 1996. It was reportedly reactivated and refitted to serve in the western Pacific as Commander Seventh Fleet’s mobile repair and support platform.

That a mobile support ship like this is docked at the same time with a fast-attack submarine in Subic could not have been just a ‘routine port call,’ activists said during their protest in Manila on Monday.

North of the capital, Subic was once the site of the largest US naval base outside of the US mainland. Against the Philippine Senate decision two decades ago to shut down the US military bases in the Philippines, and against the Philippine Constitutional ban on nuclear weapons, nuke-armed US warships, submarines and planes have been increasingly arriving in the Philippines without even a squeak of protests from the Aquino government, various progressive groups complained. In fact, according to Gabriela Partylist Rep. Luzviminda Ilagan, the US has somewhat renewed its use of the Subic Bay as a warship repair facility without corresponding treaty.

In recent months, two fast attack submarines – the nuclear-powered USS North Carolina and the USS Louisville – and the American’s largest hospital ship, the USNS Mercy, had also docked at the former US naval base. At the Manila Bay a couple of weeks ago, the missile destroyer USS Milius also stayed for a few days supposedly just for refueling. In Washington, London and Japan that same week, reports cited the US defense officials as choosing a location in Japan and the Philippines for two separate radars of the United States’ missile plan in Asia. 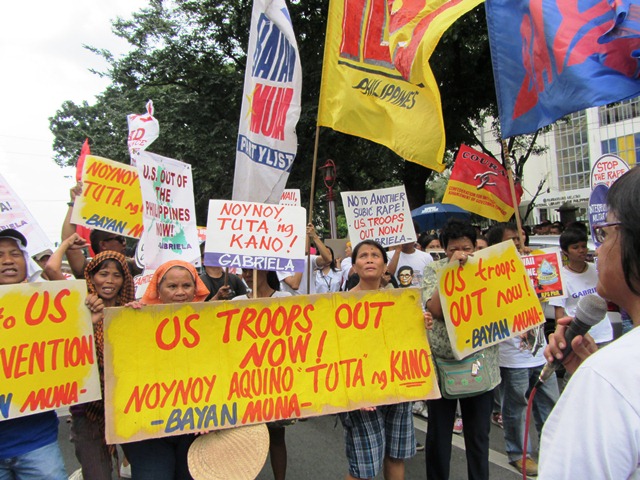 Barred by the police from proceeding to the US embassy, protesters hald a program instead with a crowd of seafarers applying for a job at nearby booths.(Photo by Marya Salamat / bulatlat.com)

“Despite strong opposition of Filipinos to US men and materiel, spy planes and naval assets continue to intrude in Philippine territory. Aquino has run out of excuses, it seems, and the Filipino people can see how he is acting like a US lapdog,” said LFS Vice Chairman Joaquin Sienes III.

The multisectoral group Bayan (New Patriotic Alliance) warned that while American and Filipino officials are justifying the increased US military presence in the country and in the region as for ensuring regional stability, the end-result threatens a likely race for military buildup between China and the US which could further destabilize the region.

Instead of peace and stability, Filipinos are being exposed to an unnecessary conflict and insecurity, Bayan said. During the rally near the US embassy in Manila, Rita Baua of Bayan also warned that the increasingly frequent port visits by advanced American warships not only constitute a violation of Philippine sovereignty and constitution. She said it also puts the country at risk of a nuclear disaster. These war machines, she explained, are likely carriers of nuclear weapons. Any accident or any conflict involving these warships while in Philippine soil or seas could thus annihilate also the population living in the vicinity.