To most of us, the dark years of Martial Law is already a distant memory; to the youth of today, it is but a page in history. However, we must revisit both the horrors and the lessons of the past, lest we forget, because that which oppressed us before still haunts us today.

The worst and best times for democracy

It was also the best times for democracy as workers launched strikes to fight for their rights and benefits, students declared a boycott of classes to push for their democratic rights, the urban poor erected barricades to resist demolition, peasants converged in town plazas as part of their struggle for land reform and the people poured out into the streets to have their voices heard, to fight for their rights, and to challenge the dictatorship, despite knowing fully well that these protest actions would be met by violent dispersals by the security forces of the Marcos dictatorship. (Click here to read more)

In this video, Karapatan opens an exhibit commemorating the 40th anniversary of the imposition of martial law. Cristina Palabay, its secretary general, says the items on exhibit should serve as a reminder that the Filipino people should be vigilant against martial law-like repression.

“The challenge is for us to truly see, closely analyze and scrutinize the current situation in the Philippines, the state of human rights, the corruption of those in power and the poverty of the Filipino people. We remember martial law and the sacrifices fighting it entailed. We remember martial law and the lessons of the people’s struggle against it. Forty-years after, we affirm it’s greatest lesson: to serve the people in all ways possible,” Dr. Carol Araullo, chairwoman of Bagong Alyansang Makabayan, said.
(Click here to read more)

Statement from prison: Remembering the horrors and heroism of martial law

They fought the Marcos dictatorship and unlike the others, have decided to carry on the struggle even after the fall of Marcos. Today, they are imprisoned at the Camp Crame for holding on to the political beliefs they have grasped since four decades ago. Read the stories of Eduardo Serrano, Eduardo Sarmiento and Renante Gamara.(Click here to read more)

Living dangerously as an activist during martial law

In one of the first lightning rallies, we inconspicuously gathered along Azcarraga avenue, now Recto, near Maxim theater, which no longer exists now. The signal to converge was a clap with the chant “Marcos, Hitler, diktador, tuta!” (Marcos, Hitler, dictator, puppet of the US). This was accompanied by the distribution of materials condemning Martial law. When policemen came to arrest us, we mixed with the crowd of onlookers. But one of our companions ran inside Maxim theater. So policemen stopped the viewing of the movie, ordered the lights to be turned on and arrested him. We also held lightning rallies along Avenida by mixing with the crowd of pedestrians while shouting slogans of “Marcos, Hitler, diktador, tuta,” “Sahod itaas, presyo ibaba” (Raise wages, bring prices down), “Martial Law ibagsak” (Down with Martial Law”, “Sagot sa Martial law, Digmaang Bayan” (Our response to Martial Law, People’s War), “Imperyalismo ibagsak, Pyudalismo ibagsak, Burukratang kapitalismo ibagsak!” (Down with imperialism, feudalism, bureaucrat capitalism).(Click here to read more)

This is Bulatlat.com’s video on last year’s commemoration of martial law. Mrs. Edita Burgos, widow of the late press freedom icon Joe Burgos and mother of missing activist Jonas, is a witness of the oppression of the Filipino people during the martial law period. Fast forward to present, Mrs. Burgos said that with the continuing human rights violations, nothing has changed in the country despite the restoration of the so-called democracy.

“Forty is not just a number to remember but a reminder of the length of time we have been fighting impunity and for the attainment of justice. “ – Marie Hilao-Enriquez, Karapatan.(Click here to read more) 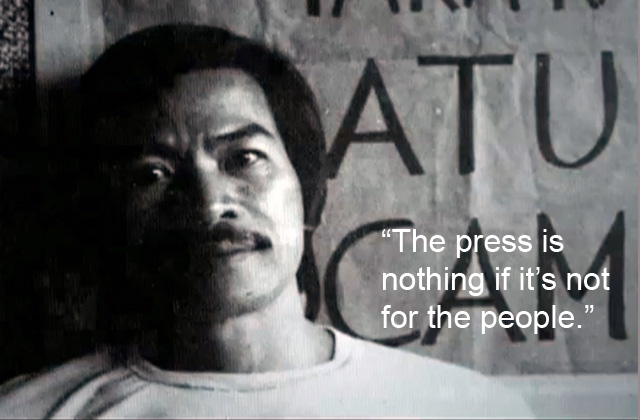 One late afternoon in early September as he was on his way to work, Satur was accosted by an armed man. His bag and all its contents were taken, but he himself was left unharmed. Even then it did not appear to him as an ordinary crime. The then worsening political climate — the bombing of Plaza Miranda the previous August , the roving police patrols — were enough reason to make him suspicious.

Upon the advise of friends, he began to side-step. He filed for a leave from the Manila Times and resigned from his post as assistant business reporter and regular reporter but retained a position as roving correspondent. He and his wife Bobbie Malay began to limit their movements in the city and moved to a house in a location they informed to no one. (Click here to read more)