“When we understand the roots of suffering, it is then that we can truly call for a cessation of hostilities and call on the parties at war to stay at the negotiating table and talk peace. The peace we seek is one that is based on social justice, one that takes into account issues of the environment and human right..” – Most Rev. Antonio Ledesma

MANILA — Advocates for a just and lasting peace in the Philippines gathered last September 21 in Quezon City to sound the call to the rest of the country to support the peace negotiations between the Philippines government and the National Democratic Front of the Philippines (NDFP).
September 21 has been declared by the United Nations as the International Day of Peace . The UN passed a resolution in 1981 to coincide with the opening of the General Assembly. The first Peace Day was celebrated in September 1982. In 2002, the General Assembly officially declared September 21 as the permanent date for the International Day of Peace. In the UN Resolution, it was said that ” Peace Day should be devoted to commemorating and strengthening the ideals of peace both within and among all nations and peoples…This day will serve as a reminder to all peoples.”

At the end of the program, students from St. Scholastica’s College, La Consolacion, La Sallette, Harris Memorial College, College of the Holy Spirit, as well as nuns from the Medical Mission Sisters and the Religious of the Good Shepherd lit neon glow sticks and recited “peace chants.”

One such chant went “Peace talks, peace talks, go go go! A just and lasting peace for all to grow!” Another went “Cry out for justice, cry out for peace! Freedom and democracy so unjust wars may cease!”

The greatest achievement is peace

Pilgrims for Peace chairperson and Caloocan Bishop Rev. Deogracias Iniguez, said the country is currently and has been for a long time in “a state of un-peace.”

“Peace is very elusive, but our Lord is the God of peace. He is with us, strengthens us, supports us in our aspirations for a just and lasting peace. Our efforts to bring peace to our society and our country should spread like fire. Achieving peace in the name of justice and true respect for life is the greatest thing that we can achieve in the name of God,” he said. 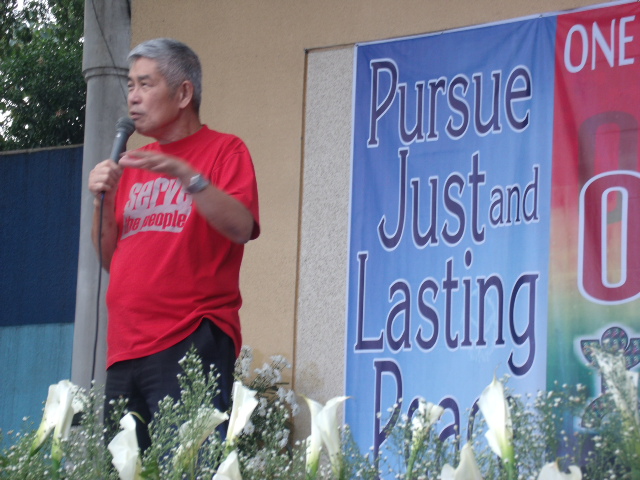 Fr. Joe Dizon, a political detainee during martial law, calls on the public not to forget the dark days of the dictatorship.(Photo by Ina Alleco R. Silverio / bulatlat.com)

Most Rev. Antonio Ledesma said peace starts with an individual, his family and their levels of spirituality.

“Spirituality means a person’s core values, his personal integrity and his beliefs in the necessity of justice and human rights in society. From spirituality comes compassion, caring for other people like the poor, and involving oneself in their concerns like agrarian reform, stable jobs and decent, living wages. When we have compassion, we can begin to have inter-cultural and inter-religious understanding: we listen to the suffering of others regardless of religious belief, and try to make efforts to alleviate suffering. When we understand the roots of suffering, it is then that we can truly call for a cessation of hostilities and call on the parties at war to stay at the negotiating table and talk peace. The peace we seek is one that is based on social justice, one that takes into account issues of the environment and human rights. We must all, in our daily lives, promote a culture of peace,” he said.

Rev. Ledesma is also the archbishop of Cagayan de Oro.

Peace Day 2012 also fell on the 40th anniversary of the dictator Ferdinand Marcos’ declaration of martial law. Given this, the invited speakers to the event related the Filipino people’s struggle against the dictatorship to the continuing work for a just and landing peace in the Philippines.

“We cannot and should not forget the darkness of martial law so we will always seek the light of genuine freedom and democracy,” said Fr. Joe Dizon of Solidarity Philippines. He was a political detainee during the Marcos dictatorship.

Fr. Dizon shared an anecdote involving a young nephew’s own understanding of martial law. He said that one day, the boy who was attending high school came home distraught and visibly upset. When asked, he said it was because one of his teachers said in class that “Marcos was the best president the country ever had.”

“My nephew grew up hearing stories about what life was like during martial law — the arrests, the sudden disappearances of civilians, the tortures. It wasn’t surprising that he was upset. It’s impossible to reconcile the idea of Marcos being an ideal leader with the reality of what he had done to the Filipino people and their human rights when he was in power ,” he said.

The morning after, he went to his nephew’s school and spoke to the teacher.

“I told her, ‘You have a right to your own opinion and your own biases, but you have no right to rewrite history,'” he said.
Martial law was declared in 1972, Fr. Dizon was ordained in 1973. On September 21, 1972, he was in Taytay, Rizal with other seminarians, when he turned on the radio, there were no broadcasts but Christmas songs were playing. Soon enough, however, reports started coming in of people being arrested by the Metrocom (the precursor of the Philippine National Police) without warrants or formal charges.

“As an individual and as a priest, I am glad of this because I learned so much about what it really means to serve,” he said.

By 1978 he was joining activities led by the religious sector to help
workers as they held strikes against unfair labor practices and against the brutal human rights abuses of the Marcos government. In 1984, he was arrested.

“Martial law and the oppression and abuses that took place in its name should never be allowed to happen again,” he said. “The Filipino youth should learn about how older generations of Filipinos and activists struggled against martial law because it will help them resist any and all attempts of those currently in power to curtail civil liberties and democratic rights.”

Dizon also issued a challenge to Pres. Benigno Aquino III who, he said, also knows firsthand how it was to suffer under political repression.
“Pres. Aquino’s own father was a political prisoner during martial law, but in the last two years that he has been president he has not released a single political prisoner among the almost 400 in various jails and detention centers all over the country. Aquino, it’s evident, did not really learn anything from martial law, at least not anything that would make him a better president than Marcos,” he said.

“For us to have a better future, let us always remember to remember.”
Fr. Pablo Ong from the Order of Preachers shared that he was in second grade when martial law was declared.

“I was walking to school one day and when my classmates and I saw a pile of guns and other weapons in front of the municipal building. As a child I thought that martial law was good because it meant everyone was surrendering their guns and ammunition,” he said.

“Forty years later, we all know that martial was not good despite what those who imposed it said. Whatever good intentions they had in the beginning were immediately after exposed to be also fraught with evil. This is what the youth of today should remember, what all Filipinos should remember. We have leaders now who say that the country is doing well and that they are doing what they can for the good of the country. Let us remember martial law, and consider that when we look at how the country is and how things are going.”

Fr. Ong said the youth have the responsibility and duty to contribute to efforts to ensure peace and justice in the Philippines.

“This is your country, and it is your future that we want to make better. Let us all pray and work for a just and lasting peace,” he said.