“For 14 years they’ve raised that defense over and over before the Regional Trial Court, the Court of Appeals and the Supreme Court. They have repeatedly invoked that amnesty and it has repeatedly been junked.” – lawyer of the Olalia family

MANILA – Members of the Philippine Army escorted and secured former Air Force Lt. Col. Eduardo Kapunan Jr. at his arraignment and hearing of his petition for bail this Wednesday. With policemen from various police departments of Rizal, soldiers closed the door of the court to members of the media. Two soldiers in uniform stood guard at the door of Branch 98, supported by more soldiers prowling the third floor hallway of Rizal Regional Trial Court in Taytay. Meanwhile, more policemen and more members of the Philippine Army were at the back and at the ground floor of the court building.

At least three pickup vehicles marked as for “military police” were parked behind the court building and at least two Elf trucks full of armed and uniformed members of the Philippine Army, one of which served as Kapunan’s escort, while the other remained behind as members of labor group Kilusang Mayo Uno (KMU) held a picket.

As soon as the hearing was over, soldiers surrounded Kapunan and promptly whisked him off via the building’s back door, down to the ground floor where an aide hastily called one of the “military police” vehicles. Dodging some reporters who tried to take his pictures, Kapunan got into the vehicle assisted by soldiers. They promptly drove away followed by an ELF truck full of armed members of the Philippine Army.

Kapunan’s lawyer and sister-in-law Lorna Kapunan told reporters after the hearing that it is “malicious” to say Red Kapunan is getting special treatment from the military. 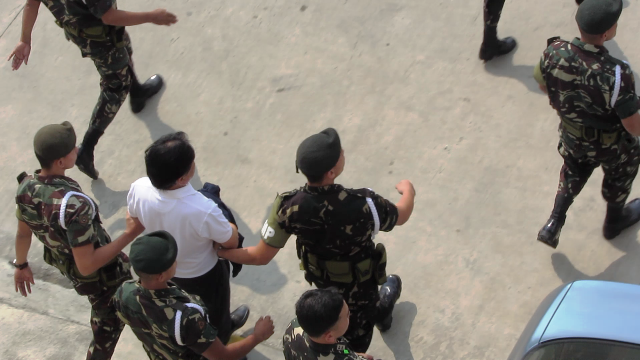 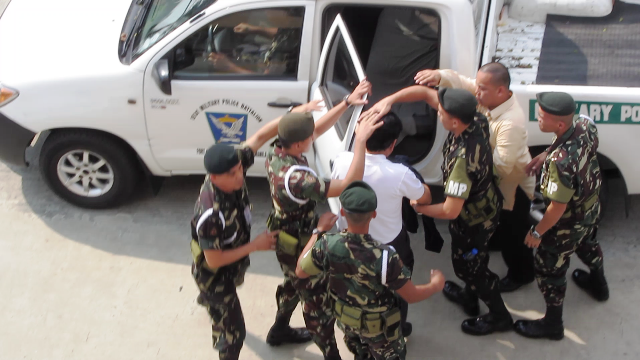 Kapunan pleaded “not guilty” to the charge of murder of labor leader Olalia and labor organizer Leonor Alay-ay. His petition for bail was opposed by the private prosecutors from the National Union of Peoples’ Lawyer. They said Kapunan’s petition for bail has no merit. Citing a long list of decisions from the Court of Appeals, the Supreme Court and the Department of Justice, these prosecutors said Kapunan is “indictable” in the murder case.

Olalia lawyers also filed an urgent motion to transfer custody of Kapunan from the Philippine Army to a jail under the Bureau of Jail Management and Penology (BJMP) nearest to Rizal Regional Trial Court or to the Rizal Police Provincial Office where co-accused Sgt. Desiderio Perez is presently detained.

Lorna Kapunan told reporters after the hearing that the Rizal Provincial Jail was “not safe” and already congested. Meanwhile, Rizal’s Hilltop where co-accused Perez is officially in custody is “a lock-up jail only … for custodial investigation only,” as a police colonel with nametag Pomollera told Bulatlat.com.

Lawyer Kapunan said they have “no objection” to Eduardo Kapunan Jr being transferred to NBI custody, “provided it has adequate security” and provision for medical care. Saying that although former president Gloria Macapagal-Arroyo had done something like this, she instructed her assistants to show the media copies of medical certificates saying Eduardo Kapunan suffers various health problems from pulmonary disease to diabetes to coronary heart disease, among others. She said that in their case, it is true.

Kapunan’s lawyer said he “was not in hiding” prior to his surrender Oct 6. “He is now a rural banker in Iloilo. And all of a sudden, there is a warrant of arrest”.

“It is about time to clear the cloud over Kapunan who was a hero of Edsa. It’s time the people see it’s for the good of the republic,” Lorna Kapunan told the media. She added that this (murder case) is “a political case for rebellion covered by amnesty.” 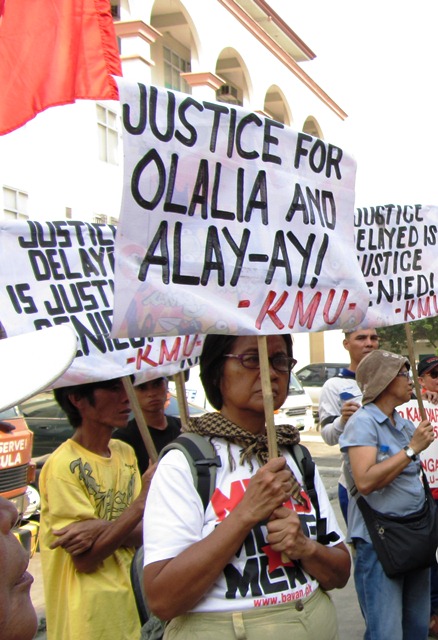 But according to Edre Olalia, one of the NUPL counsels for the families of the murder victims, the argument claiming that the accountability of the accused over the crime had been extinguished by the amnesty had been junked already by the Supreme Court.

“For 14 years they’ve raised that defense over and over before the Regional Trial Court, the Court of Appeals and the Supreme Court. They have repeatedly invoked that amnesty and it has repeatedly been junked,” Olalia told Bulatlat.com.

If the murder case had dragged on and the cloud over Kapunan’s head had remained, “it is the product of their doing,” said Edre Olalia, referring to the battery of motions and appeals filed by Kapunan and the other accused in courts over the last 14 years. Olalia said that as of 2009, the Supreme Court had already ruled “with finality”.

The said High Court decision of March 13, 2009 discussed and settled the question of coverage and applicability of Amnesty Proclamation No. 347 to the cases of the accused in the Olalia-Alay-ay murder. In conclusion, it said “there is prima facie evidence for the prosecution of the petitioners for the murders of Rolando Olalia and Leonor Alay-ay.” As such, according to Edre Olalia, the reissued warrants of arrest against the accused should not have come as a surprise to these accused or to their counsels.

Based on the Supreme Court decision on March 2009, and its denial of Kapunan’s appeal on April 2009, Kapunan and the other 12 accused would now have to “prove before the courts that the murders were elemental to his commission of the crime of rebellion,” for which they availed and received amnesty.

But the High Court decision itself expressed doubts over the connection of the Olalia-Alay-ay murders to the act of rebellion of Kapunan and 12 other named accused, which was covered by the amnesty proclamation. The High Court said in its March 2009 final decision over the case that “it is difficult for the Court to appreciate at this point how the Olalia/Alay-ay killings were connected with the 1987 or 1991 coup attempts.” Similar to what the 1998 decision of the then Justice Secretary said over the same case –in response to appeals of the accused– “the rebellion mounted by the RAM against the government was made long after the killings.”

Besides, the rules of the National Amnesty Commission itself said that “those crimes that are not disclosed are deemed excluded from the legal effects of the amnesty granted.” Kapunan and the accused had not listed the murder of Olalia and Alay-ay as one of the crimes in their application for amnesty.

During Kapunan’s arraignment today, he also pleaded “not guilty.”

“Logic and reason dictate that amnesty for a particular offense could not have been granted when it was not even applied for,” a resolution affirming the findings of a panel of prosecutors issued by the Justice Secretary on July 1998 had said. 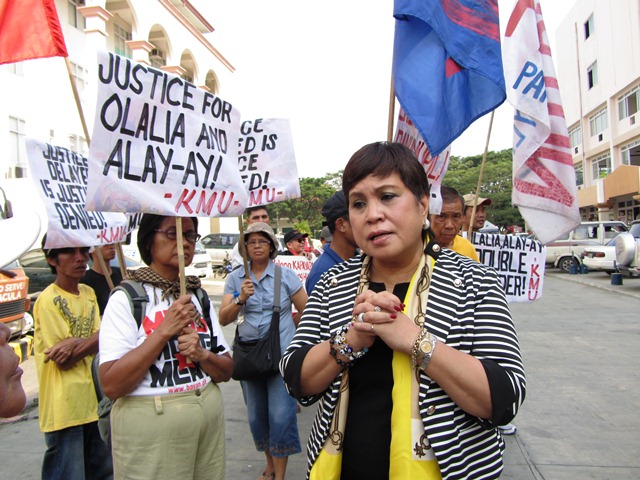 Lorna Kapunan said Red has already served (President Benigno “Noynoy”) Aquino as deputy director of CAAP, and in DFA assisting government in intelligence. She said they do not want to be like the Olalia counsels who “use the media” in discussing the case. She said the case is covered by Amnesty 347, and “all the SC said is ‘let Kapunan prove that this offense (murder) falls under rebellion and other component acts.’”

Olalia counsels blamed the more than 14-year delay of this murder trial on the repeated, rehashed filing of cases of the accused to delay the trial by invoking the amnesty they received from the government. The Olalias said “The delays are not our fault. We’re just opposing all they’ve been doing.”

Kapunan’s lawyer disclosed “there is serious threat to Eduardo Kapunan’s life,” because of the general atmosphere surrounding the case. She also said “the militant left is riding on this case.”

Before leaving the court grounds, she approached the protesters and talked to some of them. “Regardless of the findings, we have two widows,” she said, adding that it is the state’s duty to recompense the two widows, and that they will not oppose it.