“Tulungan nyo sila nang matapos na yang trabaho.” (‘Help them finish that job.’) a witness quoted Col. Eduardo Kapunan Jr. telling them. And it was Sgt. Sumido who informed witness that “the job is regarding Rolando Olalia.”

MANILA — The first presentation of witnesses to the Olalia-Alay-ay double murder this week was cut short when the witness who had recently suffered a stroke, failed to continue giving the rest of his testimony. The first witness presented by the prosecutors was former TSgt. Medardo D. Barreto, a former soldier and member of the team that conducted the ‘operations’ that resulted in the Olalia-Alay-ay double murder in 1986.

So far, he had told the court about the existence of a Special Operations Group (SOG) under the Department of National Defense. He said the commanding officer of the SOG in Oct 1986 was Col. Eduardo Kapunan Jr.. But he said their organizational setup was “complicated” since that month, as they were to be transferred to another commanding officer, who, as far as the witness knew, was under the then Col. Gregorio Honasan. 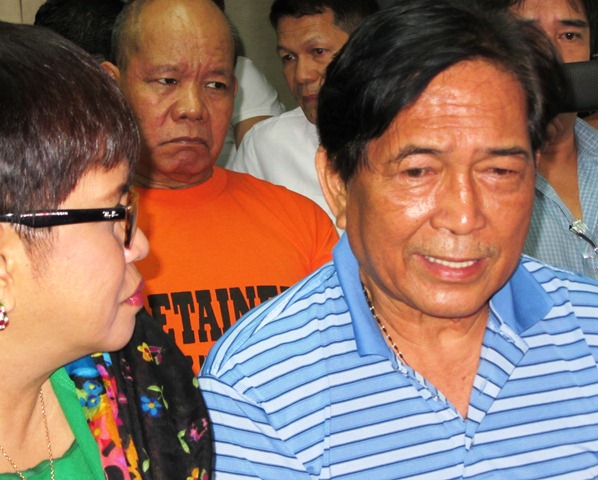 Barreto pointed to Eduardo Kapunan who was in court this Wednesday.

“We conduct intelligence operations against them (CPP-NPA),” said Barreto. These include “covert tasks of the Armed Forces of the Philippines, such as maintaining contacts, asset informants, and we use them to apprehend elements of the CPP-NPA,” he told the court in Filipino this Wednesday.

“No one directly ordered me to conduct the operations against Rolando Olalia,” said Barreto, who was the team leader of a group assigned to the Special Operations Group. “We were included in the job when Col. Kapunan called us to his office,” Barreto recalled. That happened on the first week of November, 1986. As team leader, Barreto said he was reporting directly to Col. Kapunan.

“We reported to him on the first week of November 1986, in his office in the administration office of the security group in Camp Aguinaldo,” Barreto said. He recounted for the court that in that meeting, “He (Kapunan) ordered us to help our companion Sgt Sumido. In his words: “Tulungan nyo sila nang matapos na yang trabaho.” (‘Help them finish that job.’)

Sgt Sumido appreciated the help, said Barreto, and it was Sumido who informed him that “the job is regarding Rolando Olalia.”

“Sabalza and I believed that that was the reason why Col. Kapunan asked us to help him (Sumido).

While planning the operations during the first week of November, the witness said, they learned that on Nov 12, 1986, Rolando Olalia was set to speak before the ‘people of Unilab’ in Kamayan-Saisaki restaurant. Sumido planned “to recon” the venue, said Barreto. Recon or reconnaissance in military parlance means to survey the venue where the meeting was to be held.

The group (Rodolfo Sabalza, Filomeno Maligaya, Edgar Sumido and Barreto) held a pre-operations briefing inside the SOG office in Camp Aguinaldo. Barreto said Sumido assigned him to drive the surveillance car on Nov 12. “Others would serve as spotters or lookout.”

It was at this point when Barreto told the court that he could no longer continue with his testimony for health reasons. The court postponed the continuation of the presentation of the witness.

Time, among others, against the Olalia murder case trial?

After a recent stroke Barreto is now under medication; he is also under the Witness Protection Program. A month before, Rolando Rico Olalia, son of the murdered labor leader and now also a lawyer, expressed worries about the condition of the two witnesses. Olalia said the witnesses are under the Witness Protection Program headed by a former lawyer of Eduardo Kapunan. 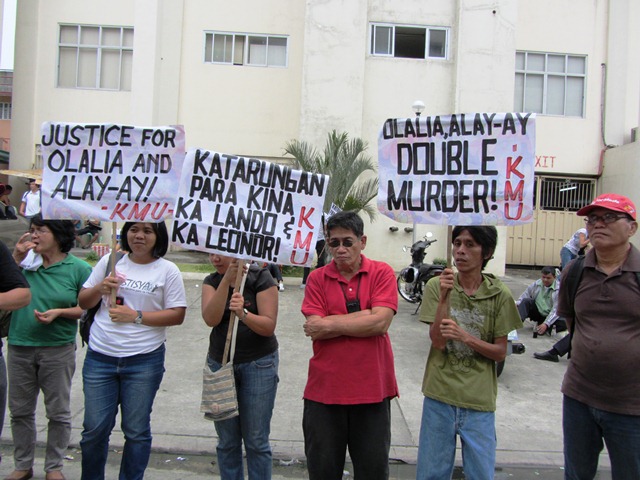 In Wednesday’s hearing, Barretto took long to answer at least three questions pertaining to the incidents surrounding their group’s involvement in the Olalia-Alay-ay ‘operation.’ Twice the defense led by Lorna Kapunan asked the court to note this as the witness’ “hesitancy” to answer. And twice the private prosecutor, as supervised by the public prosecutors from the DOJ, asked the court to note also that it has been nearly 26 years since the events the witness was recalling now.

Outside the court, members of the National Federation of Labor Unions, and other affiliates of the Kilusang Mayo Uno (KMU), conducted a picket even as members of the Philippine Army and the Philippine National Police prowled the court grounds. Roger Soluta, secretary-general of KMU, condemned the “impunity” with which he said the accused abductors and murderers of Olalia and Alay-ay were conducting themselves. The protesters assailed the military protectors and “backers in high places” of not only the accused, but also of their superiors.