The month of October was declared as National Children’s Month, but still the rights of majority of Filipino children are being trampled upon due to poverty, lack of access to basic social services, and child labor, and the alarming increase in cases of rape, sexual assault, harassments, being made as human shields in military operations or paraded as ‘child soldiers,’ and killings.

MANILA – In the morning of July 15, cousins Kimkim, 12 and Junjun, 13 (not their real names) were supposed to go back home when about 50 soldiers saw them. They were called by the soldiers and were told to lead them to where the camp of the New People’s Army is. If they did not cooperate, the soldiers threatened to tie them up in a tree or kill them. Both children are from Magpet, North Cotabato.

“It was about 11:00 in the morning when we came across the soldiers. We were so afraid so we did what they told us to do even if we knew nothing about the camp of the NPAs,” Junjun said in Visayan language. Kimkim turned pale and was crying all the time because of fear.

According to Numeira Morales, Regional Program Director of Children’s Rehabilitation Center (CRC) in Cotabato, the children were told by their aunt to charge her cellphone in the house of another aunt in a nearby sitio in Sitio Tinagasan. There is no electricity in Sitio Buay-buay where Junjun lives.

“The kids were heading their way back to Sitio Buay-buay when the soldiers saw them. Before they left Sitio Tinagasan, they were told not to pass through the place where rubber trees are planted and take a shortcut instead because the soldiers might see them,” Morales told Bulatlat.com. Unfortunately the soldiers still chanced upon them. 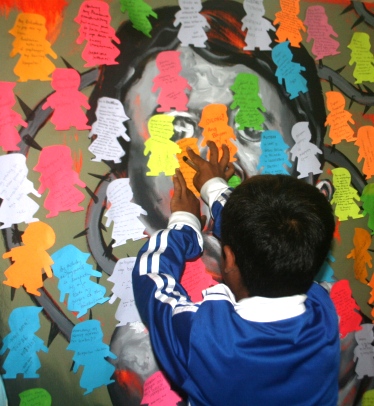 Kimkim who came all the way from North Cotabato posted his wish for his fellow children’s welfare to a freedom wall in the national conference held last Oct. 2 at UP Diliman. (Photo by Anne Marxze D. Umil / Bulatlat.com)

For about four hours, from 11 a.m. to 3 p.m. Kimkim and Junjun were forced to accompany the soldiers. Junjun said that while walking, the soldiers’ firearms were pointed at them. “We were so hungry and thirsty; the soldiers didn’t even give us food. When I saw a bamboo field I whispered to Kimkim that I would tell the soldiers that that is where the camp of the NPA is so that they would let us go and we could go home,” Junjun told Bulatlat.com. When he told the soldiers, they were sent home and they ran away.

“To use children as guides in military operations is a clear violation of the children’s right to be protected,” said Morales. She said this places children’s lives at risk if there would be an encounter between the NPA and the soldiers.

Kimkim and Junjun are just two of the many children victims of human rights violation.

October has been declared as National Children’s Month, pursuant to Presidential Proclamation No. 267 issued on September 30, 1993 by then president Fidel V. Ramos. The declaration also provides that the State shall promote and protect the physical, moral, spiritual, intellectual, and social well being of children. Sadly, data from CRC will show that children are subjected to different forms of human rights violations – some children were even killed.

As of Oct. 22, CRC has recorded 14 children killed from 2011 to 2012. Moreover, there were 18 cases of frustrated killing, four cases of rape and sexual assault, and 12 children were branded as child soldiers.

“It is enraging that a child, minor in this case, was killed on children’s month,” Melissa San Miguel, executive director of Salinlahi Alliance for Children’s Concern said. San Miguel announced the killing of John Cali Lagrimas, 14 years old during the national conference of child rights advocates.

When the death of Lagrimas was announced in the conference, a friend of his Jojie Martinez, 10 could not help but cry. He was supposed to share his experience in the hands of the military in their community in Hacienda Luisita in the said conference, but he was not able to because of his anguish over his friend’s death.

More children go hungry, forced to work due to poverty

In the ideal world, children are supposed to be protected from harm, and are able to enjoy basic social services such as education and health services. In the ideal world, children are not supposed to die of hunger; they should have a roof over their heads and are living in a safe and secure environment; they do not have to work to augment their families’ income. But none of these happen in the real world.

In the conference, child rights organizations from all over the country recounted a lot of stories of violations of children’s rights, ranging from their right to be protected, to deprivation of social services, education, among others.

She said the neoliberal policies of deregulation, liberalization and privatization of government services have devastating effects on children. “Privatized social services make access to fundamental rights such as education, health, and housing unattainable, while deregulation makes prices of commodities beyond the reach of their parents.”

This reflects in the data of the National Nutrition Survey in 2011, which shows an estimated 20.2 percent of children with ages from zero to five years old and 32.1 percent of children with ages six to 10 are underweight due to poverty. “Families find it impossible to apportion their small income to sustain their children’s survival,” San Miguel added.

She said the 3.8 million families who suffer from hunger is a reflection of the Aquino government’s neglect of its duties and responsibilities to improve the lives of the 94 million Filipino people.